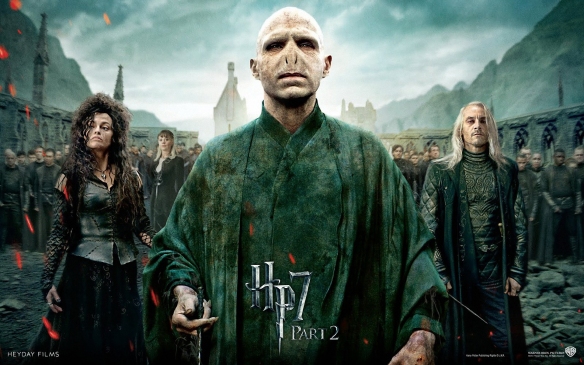 Well, the day has finally come. The last of the Harry Potter movies has been made, and with its release in theaters all the hardcore fans can enjoy the epicness of witnessing the conclusion of such a beloved story while simultaneously crying that it’s over.

Harry Potter has been a huge part of my life for years now. I was about twelve when I read the first three books, and now ten years later, sitting in the theater for the final movie, I feel as though my childhood has come to an end with the franchise. Harry Potter is someone I grew up with, so this was also a depressing day for me. I know it sounds sad, but I have to wonder what I’m going to do with my life now that this is over.

So this movie picks up right where Part 1 left off. Voldemort has the Elder Wand and Harry has just buried Dobby. From there, he, Ron, and Hermione continue on to find the last remaining Horcruxes and destroy them.

Part 2 is fairly fast paced once our favorite trio makes it back to Hogwarts. They return, and then they battle… and that’s pretty much it. It’s like watching a two-hour-long climax. I was reminded of the battle in the last Lord of the Rings movie. You know, the one that never ended, kind of like the Dark of the Moon fight now that I think about it. The difference being that the Deathly Hallows’s battle seemed more broken up and didn’t run like one great big scene. This was good, as it needed to be divided to allow the audience a moment’s rest, and provide us with other scenes and characters such as Snape’s memories and the Ghost of Ravenclaw.

I’m pretty content with how everything turned out. However, if there’s one thing that bothered me, I would say Bellatrix’s duel with Mrs. Weasley. Julie Walters and Helen Bonham Carter are superb, but I expected more from their fight. In the book, it was so epic that even Voldemort stopped killing people to watch. Everyone stared as Mrs. Weasley ripped into Bellatrix and screamed in all the rage caps lock can muster, “YOU BITCH!” In the movie, it’s kind of like, “oh, time to kill Bella.” It still earned a round of applause from the audience, but still…

On another note, I liked how Lupin was not the unlikable douchebag he becomes in the book. It made his death much more saddening. I’ve never really shipped Lupin/Tonks, but I really liked the whole hand thing the director did with them. Unfortunately, Lupin’s, Tonk’s, and so many other deaths happened right after Snape’s. So much time was spent with Snape, and he’s the one that matters the most out of all the dead people, that when the movie cuts away to show everyone else, the audience doesn’t really get an appropriate amount of time to mourn him. I suppose when we see his memories that would be a great time to burst into tears, but his death overrode everyone else’s. So I was sitting there like, “Don’t care about Fred even though I did in the book. I only care about Snape at this point.”

Another thing with Snape, Harry doesn’t use his true loyalty to mock Voldemort as he does in the book. That’s not really important; I just liked that scene. And speaking of things that were cut out, Kreacher didn’t lead a house-elf rebellion in the name of Regulus Black. Oh, well. The movies are long enough as it is, and we can’t have everything. Though at the very least, they could’ve let Harry repair his original wand.

The ending is a really big letdown as well, but it was in the book, too. I thought Albus Severus Potter was cute, but the whole future scene just doesn’t seem to work. And it came across even poorer on screen than it did in the book. I thought that it was more like a pretty bow wrapping up the story in a Happily Ever After than it was an epilogue (well, they do deserve a happy ending, considering everything else they went through). At the very least, they could have tried to make the actors look older, and they did to a small extent, but not nineteen years older. Not old enough to have children already at Hogwarts.

Harry Potter offers a wide variety of characters, but for the length of the books, it only really explores those in Gryffindor. I believe that the books’ the biggest problems arise from a lack of development in Slytherin. An audience doesn’t need to agree with the antagonists, but it still needs to understand their drives.

Draco Malfoy, for instance, remains a two-dimensional bully until Half Blood Prince, when finally the Malfoys are given an identifiable motivation—that being an overwhelming love for their family. Narcissa was just as excellent in the movies as she was in the books, and surprisingly we see more of it in the movies. In the film adaptation of Deathly Hallows, she gets her son and she gets out—by the way, I love the Voldemort hug and the look or pure misery on Draco’s face during it—and it shows that the Malfoys are more loyal to family than they are to the Death Eaters. This makes them a wild card, since they’ll help whichever side they need to, light or dark, in order to keep their son safe, which makes me wonder why the hell Lucius Malfoy looks back on the final battle longingly in the movie. That did not happen in the book. He was not torn between Voldemort and his son. The moment Draco fell into danger, he wanted out. The Malfoys are an interesting group. It just took so long to get to them. The payoff in this case, however, was well worth it.

There are, of course, so many other points to talk about, but we’ll end it here. Until next time.

2 thoughts on “Movie Review: Harry Potter and the Deathly Hallows”