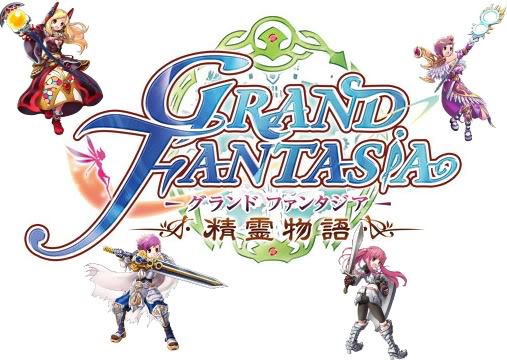 I’ve been trying to clean out my laptop recently, and while deleting programs I didn’t even know I had one thought remained ever-present in my mind: damn, I have a lot of MMOs. If I ever find myself surfing the same sites over and over in the same day, my solution is to look for an MMO to waste my time with. Luckily, this time I didn’t have to look at all. This game was… ‘recommended’ isn’t the right word. ‘Brought to my attention and strongly suggested that I should try it out’.

I’ve played some MMOs sponsored by Aeria before. In fact, I really enjoyed playing Dream of Mirror Online (DOMO), so looking at Grand Fantasia’s cute, anime style I figured it would be in the same vein and the same quality. I was mistaken. Ooooh, was I mistaken. But let’s go over the basics first.

GF uses the universal controls for MMOs: WASD or mouse-clicking to move, number keys for skills and hotkeyed items, right click for targeting. Herein lies the first problem: targeting is finicky. Sometimes you can right click on an enemy and you just stand there; apparently you clicked on the wrong spot. Also, if the enemy moves or is knocked from a position differing from ‘directly in front of the character’, you stop targeting. This has led to much frustration on my part, since I mainly play a melee class and sometimes I need to focus on something else for a second, only to come back to my character standing stupidly while getting attacked, because my mage party member used a skill that pushes enemies back.

This goes right into the next problem: class balance. There are three main classes in GF, again, as usual: mage, archer, and warrior. I have played all three beginning classes and I can say that they’re so different power-wise that it almost breaks the game. Warriors have amazing defense (as to be expected) and good attack: they’re the middle of the road class. Mages have terrible defense but are so ridiculously OP (over-powered) right away that it doesn’t make a lick of difference. At level seven, I could have probably taken level thirteen monsters in beginner gear. That’s how OP they are. And archers. Poor, poor archers. They have the expected range from bow attacks and a higher critical damage chance, but their power and defense is low and the bow stops working at random times during battle. That is to say, when an enemy gets into close range, archers switch to using their swords; however, sometimes they stop using their bow while the enemy is still a couple in-game feet away so the character is standing there doing nothing for a couple of seconds. That’s really unacceptable.

This doesn’t get any less unbalanced as the characters level. Or, at least not from what I’ve seen. I’ll use the example of my friend and I. Like I said, I play a warrior—now a Paladin—that focuses on defense. I am supposed to tank.

My friend plays a mage, necromancer to be exact, making her the summoner class. She can tank better than I can. A mage can tank better than a warrior. I don’t think I need to tell you what’s wrong with this. Before you even think about bringing level into this, we’re within one or two levels of each other. Plus, I’m supposed to attract enemies more easily (to help me hit more enemies at once: the point of being a tank), but all of my attacks that are supposed to generate threat (aka: make enemies mad at me) pale in comparison to her just standing there.

In addition to skills and classes being rather messed up, the game is graphically glitchy. It’s like those old Nintendo 64 games where you could walk through walls and fall through the floor, except now you can share it with a thousand of your closest friends. The staff for this game has done nothing to fix these glitches.

In fact, the staff for this game is virtually non-existent. There is a distinct lack of moderation anywhere in game and a looming sense that not even the developers give a shit about GF anymore. Even the Game Sages (players who volunteer to help keep an eye on the servers) don’t seem to do their job. Of course, by the amount of flack they get I can understand why they would make themselves scarce.

Oh, yeah, the community sucks too. At any given time, any chat—despite the fact that not all chats are to be used for straight up chatting—can be filled with homophobic, sexist, sexual conversation or, just in general, bad-natured people. I want to be able to say that this is due mostly to the fact that its summer and bored little thirteen-year-olds have nothing better to do, but I can’t be certain. What I can be certain of, though, is that if you disable most of the chats your experience playing this game will improve ten-fold.

Here’s the kicker of this review: I really like Grand Fantasia. I like the quest progression: it never seems like you’re simply grinding in a certain area for too long (this isn’t to say you don’t have to grind, it is an MMO, after all).

The NPCs are actually interesting if you read their dialogue and there seems to be a good sense of equality in this fictional land: kick-ass female knights to offset the wibbling waifs and such. The crafting system in this game, while endlessly infuriating, is innovative and interesting (and not time consuming). The in-game economy isn’t too terrible and despite the 90% of terrible people in the community, the other 10% are genuinely friendly and want to help you out. Finding a party isn’t hard and neither is finding an active guild. And while I find the armor aesthetically pleasing, it does cater to the male audience. My warrior’s first set of armor after her job change to paladin was a short, frilly skirt and a bikini top, so if that kind of thing bothers you I would either not play this game or not play a paladin.

I can’t say I would recommend this game for long-term play, but I would say give it a shot. I feel like it would be especially good for a first time MMO player as the beginner area is separated from the other players and it teaches you the controls in short, easy quests. If you can convince someone to play it with you, that’s even better. Grand Fantasia is a game best shared with friends: you need someone to complain about all these terrible things with, after all.