Back in January I was at Ohayocon, and I saw a really sweet-looking cosplay. It looked like this: 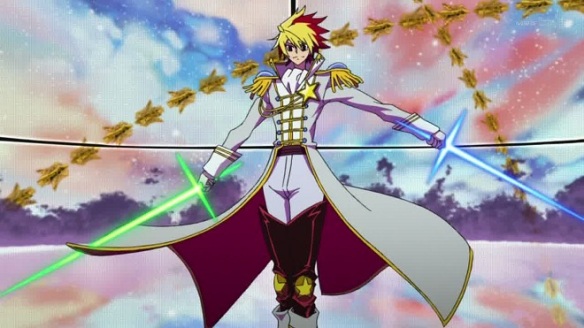 Pretty awesome, right? I did some rapid-fire googling on my phone and figured out that it was the main character of Star Driver. The character designs looked cool, so once I had some free time (not until about a month ago because of Otakon and other real-life interferences) I started to watch it. And it’s taken me the whole month to get through the 25-episode series. In the meantime, I’ve watched all four seasons of The Venture Bros., Torchwood: Children of Earth, all of Paranoia Agent, and various episodes of anime and other shows, because I just could not watch more than one episode of this at a time. The only reason I stuck it out was for you guys, because this screamed to be reviewed, so you better be grateful. *shakes fist*

So the first potential turnoff of this series is the title of the position given to the main character: Tsunashi Takuto is the fabled “Galactic Pretty Boy”. (This suffers a bit in translation—it’s a direct translation from ‘Ginga Bishounen’ in the Japanese, but it doesn’t sound as stupid in the Nihongos…) They also use the word ‘libido’ to refer to fighting spirit constantly. -__- But plenty of shows have stupid names for their characters’ magical powers and other weird translation quirks, and so if it was only that, I’d have gotten over it. But the plot…

On this island that is… somewhere… there are a bunch of people called Star Drivers with magical powers, and they can control these weird CLAMP-esque noodle mechs called ‘Cybodies’, but only in a separate dimension (not in our time and space). Glittering Crux, the bad guy organization in this show, want to discover a way to use them in real time so they can… take over the world or something. The good guys (who consist of Takuto, his friend Sugata, and four mostly useless girls called Maidens) are out to stop them. Everyone’s in high school together. Shenanigans ensue.

Why is it bad? Well, I looked up this show on AnimeNewsNetwork, and this is what they listed for the genres/themes of Star Driver:

That is so much. That’s too much. It’s so busy trying to be each of those different types of shows that it can’t focus on a plot that makes sense. A ton of things happen because of reasons, with no sensible plot relevance behind them. The mythology behind the Cybodies is never explained. The battle scenes use the same recycled footage of Takuto summoning his mech in every single episode, and all of the villains crash and burn as soon as Takuto gets serious. All the girls (and some of the boys) on the island are in love with Takuto in true harem style, but it even fails at being harem anime by virtue of the fact that Takuto is attractive and has attractive qualities. Harem guys are supposed to be bland, useless Bella Swan-types so that the male viewer can more easily self-insert. (Also, against my better judgment, I do sort of ship the three main characters now—their OT3-ness is pretty much canon, and adorable.)

Pretty much the only good thing about this show (besides having attractive male leads—and by the way, Takuto is way cuter as his regular self than he is as his Pretty Boy self) is that the opening song is by Aqua Timez, one of my favorite anime bands, and even that was ruined when they changed it mid-show. The second ending was by Scandal, who’s also pretty awesome, but this song just wasn’t doing it for me.

Basically, I watched this show so you wouldn’t have to. Please don’t watch Star Driver.

1 thought on “On Galactic Pretty Boys and Too-Busy Storylines”