A lot of people say that you can’t really call yourself a Whovian if you’ve never seen any classic Who. To those people, I say that it’s not okay to give people assignments on what they should or shouldn’t do before they can call themselves geeks. So that’s not the reason I’m watching classic Who. 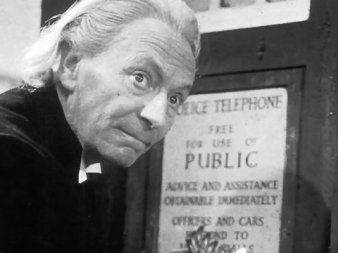 But hey, I am watching it, and this series will encompass reviews of the good old days. Some of them will look at entire seasons, some at specific episodes; it will jump all over the place between Doctors in properly timey-wimey fashion; but all will be rooted firmly in the appreciation of the Doctor by Hartnell through McGann. I hope to watch as much as I can before the 50th Anniversary next fall.

So when I say Season One above, I mean, well, the very first season of Doctor Who that ever aired, back in 1963. The season that started it all, beginning with “The Unearthly Child.”

This season, like most of the classic Who series, is in half-hour episodes that are grouped together in serials. The first, “An Unearthly Child”, is four episodes long, and introduces us to, well, the Doctor, as well as his granddaughter Susan, and Susan’s schoolteachers Ian and Barbara. Susan is in her late teens and appears to be attending Earth school because of… reasons. Ian and Barbara are the first of a long line of accidental companions; they follow Susan home because they’re concerned about her weird ideas about (Earth) history and science, and end up in the TARDIS.

There they meet the Doctor, who in his William Hartnell form is crotchety, old, and suspicious of the two strangers. Concerned that the teachers will make life difficult for him if he lets them go, he straight up kidnaps them and takes them back to 100,000 BC.

The rest of the episode (featuring some drama with cavemen and a proprietary argument over this newfangled invention ‘fire’) is not that exciting. Which, honestly, is okay, because the next one is a seven-episode bit of greatness called “The Daleks.”

Yup, there they are.  Second storyline ever in Doctor Who, and we’ve already got space Nazis in trash cans.

This is the Doctor’s first-ever encounter with the Daleks, and although some of the original details about the nasty aliens were changed over the course of the show, they’re pretty much the same extermination-happy tin racists from Skaro we saw not a month ago in the new Who series seven premiere.

This episode more than makes up for the slow pace of the previous serial. It’s exciting, science-fictiony in a way cavemen weren’t; and it makes me want to watch more.

The next few episodes, however, are sort of boring. “The Edge of Destruction” is short; (“Marco Polo” is lost to time as a result of the BBC’s junking policy in the ’60s), “The Keys of Marinus” was a little long and a little too Legends of the Hidden Temple, and “The Aztecs” is full of paternalistic white privilege (Barbara loves Aztec culture but she thinks that she can make it better and change history and pretends to be a goddess and stuff).

“The Sensorites” was okay, but its central conflict ranged around the fact that the Sensorites stole the lock from the TARDIS and the Doctor couldn’t get back in and was forced into helping them. Like just slid the whole cylinder with the lock right out of the door. That’s just sort of silly.

Best episode by my standards, after “The Daleks”, of course, was “The Reign of Terror”. Despite missing a few episodes in the middle, it dealt well and informatively with the titular era, which is one of my favorite time periods, and apparently one of the Doctor’s favorites too.

Things I liked about this season:

I definitely recommend checking a few of these serials out. “The Daleks” is an especially interesting watch as it sets up an adversary that will remain strong for fifty years so far.

1 thought on “An Unearthly Journey: Doctor Who, Season One”