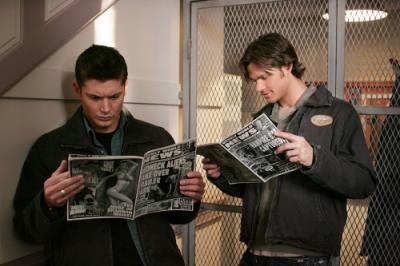 The boys are back in town and ready to hunt some monsters and save the day. Well, they might be. Dean’s got a new monster pal, Sam’s got a dog, and Cas is trapped in Purgatory. Hmmm… the way things are shaping up you might actually want to go to Kevin Tran to solve your monster problems.

Anyway, I’m getting ahead of myself. Let’s talk Supernatural!

As those of you who have read my past Supernatural reviews know, I wasn’t overly found of season seven. Certain episodes were good, but the overall plot and lackluster villain was just uninteresting. Despite that, after hearing more about the season eight plot from SDCC interviews I was actually pretty excited about season eight.

So what do I think about the premiere? Well, I’ll tell you.

One of the things I was excited to hear about was that the writers were solving the whole “Sam and Dean need to stay together or fans will pissed, but if we don’t show the fans Purgatory they will also be pissed” problem. They solved it. With flashbacks!

Which was great! I love when shows actually show me things and just exposition dump. However, this episode may have suffered from too many flashbacks. Dean had a flashback to Purgatory, then Sam had a flashback to… hitting a dog… then Kevin had a flash back to fighting a demon—what is this? An anime?

Actually, the show could probably learn from anime. In most of the anime that I have watched there seems to be a lot of flashbacks but usually it’s only one character’s flashbacks per episode. That might be the way to go here, because three flashbacks from three different characters every episode could be a problem storytelling wise. For this episode I get that everyone wanted to see Purgatory and we needed to understand how Dean got out. I even understand Kevin’s flashback, because otherwise that whole story might have just be an exposition dump, but Sam flashing back to the dog… really? We couldn’t save that for episode two? Especially since the whole thing wasn’t helping me sympathize with Sam.

But I’m getting ahead of myself. Let’s talk about Benny.

So every site I have been to shows fans are really anxious about Benny. Why? Well, everyone is worried he’s going to replace Castiel. It seems like they might actually have something to fear. Benny and Dean seem to be close for reasons that have not yet been revealed to us. There is a lot of hugging and Dean basically telling Benny to call whenever he needs him, despite the fact that Benny is clearly killing people. Benny is also clearly driving a wedge between Dean and Cas. Right away Benny insists that Dean ditch Cas in Purgatory while they find the portal out. Dean refuses in his flashback and goes to find Cas, but clearly Dean left Cas, again for as of yet undisclosed reasons. It’s not clear if Cas lost it or was almost killed so Dean thought he was as good as gone and left, but ever the case Cas is out of the picture and Benny is in.

(And can I express some of my own fan girl concerns here? Usually in these post I try to keep things professional, but I love Castiel. He is my favorite. I’m currently wearing a t-shirt with his name on it. So yes, I’m a Cas-girl. And I just can’t help but feel so bad for him. Castiel has done everything to help the Winchesters. Everything! Even last season when he went crazy and became god he did it, at least at first, because he was trying to stop the apocalypse again. Sam and Dean worked so hard to stop Michael and Lucifer, and Cas was going to make damn sure that didn’t happen again. Yes, he went crazy, but he fixed it… kind of, and it’s not like Sam and Dean never screwed up—see: started the apocalypse. Despite all that Castiel has done for Sam and Dean they kind of treat him like crap. Which, with the exception of Bobby, is how they kind of treat everyone. This is why the Winchesters have no friends. So it was aggravating to see Dean so friendly with Benny, because despite them being together for a year, we the fans have only seen them in this one episode so far. And yet, Dean acts already like he would die for this guy, while Cas is stuck in Purgatory still. It bugged me. Okay, there is my fangirl rant. Now back to your regularly scheduled review.)

I’m going to guess since the Supernatural writers have never really developed a “good” monster—there have been good monsters but they are rarely explored in depth—that Benny is still going to be evil so, I’m betting that within Dean’s flashbacks there will be a Frodo/Sam/Gollum dynamic, meaning that Benny will purposeful lead Dean astray (and away from Cas) for his own purposes and any time Cas tries to stop this it will just make Dean doubt Cas more. But who knows. We are due to see Cas in some flashbacks soon and it does seem like the writers intend to include him more than they did last season.

Until then, however, we have Benny. I do think Benny is interesting if only, at the moment, because of his current relationship to Dean. I want to know more about him and that’s a good thing for a new character. Now, I didn’t immediately like him the minute he appeared on screen like I did characters like Crowley, Gabriel, Bella, or Balthazar, but I still liked him. It’s a good start and I’m hopeful about where the writers go with him.

Now we need to talk about Kevin. Heh, see what I did there?

Last season I said that I liked Kevin Tran despite him being a pretty cliched character. Well, forget about that! Kevin is awesome! I can’t express how much I love him. Dean disappears and Sam just dumps him, but Kevin not only survives but manages to kill some demons and take on Crowley in the process. He even tricks Crowley and his demon sidekick into walking right into a trap saving himself, Sam, and Dean. I’ll be happy for the rest of the season if I just constantly have Kevin around as a supporting character.

Now let’s talk about our main boys. Dean we already pretty much covered, but it seems like his big drive in this season is his debt/friendship to Benny and his friendship/abandonment of Cas. It was nice to see Dean more sure of himself this season. Furthermore, though Dean seems on edge and even more violent (he man-handled that demon way more than he normally has), overall he seems okay after his trip to Purgatory, which is nice and makes sense. He survived hell, and while I’m sure Purgatory was no cakewalk, it’s nice to see Dean holding himself together pretty well, especially after last season when Dean was just so depressed and unsure of himself all the time. Hey, maybe Purgatory did him some good. We’ll see.

Sam, what can I say about Sam.

Sam’s flashback was boring and really over dramatic. I’d be upset if I hit a dog, but he acted like he ran over a person; it was just a little extreme. And we meet (I’m assuming) Sam’s future girlfriend for two seconds. She appears to just be a normal person, which I was a little disappointed by. I would like to see some women like Jo, Ellen, Anna, and Bella more. Women, that actually know their way around Sam and Dean’s world and know how to take care of themselves, but there is a rumor that this girlfriend will be back and she has something of a past herself. Fingers crossed that this will be the kick ass female character we were all hoping for.

Apparently, after Dean and Cas disappear, and Meg and Kevin were kidnapped, Sam just looked under a few tables, shrugged, and went on to get himself a dog and a new girlfriend. What the hell, Sam? Some people have suggested this shows that Sam is maturing and moved on in a way Dean never could, but I disagree. I can buy Sam thinking Dean and Cas were dead or that there was no way he could get to them, but he didn’t even try. On top of this he just abandoned Kevin, a total noob to their lifestyle, Sam knew who had Kevin. He’s helped track down Lucifer and the Four Horsemen of the Apocalypse, but he couldn’t even try to find Crowley. Really, Sam?

As far as Sam abandoning Dean goes, all I have to say about that is this—ADAM!

Adam Milligan, Sam’s and Dean’s half-brother is still in hell with Michael and Lucifer. He’s been there about three years now, which if I remember how Dean described time working in hell, that means he’s been there almost three hundred years. So, unless Michael really likes Adam (which I doubt) he’s been there for three hundred years getting tortured by two of the most powerful beings in the universe. And this is going to continue for eternity. Yeah, for a show about family Sam and Dean sure do abandon theirs. I actually don’t blame them so much as the writers of Supernatural who apparently forgot about Adam.

So am I surprised Sam abandoned Dean (and Kevin)? No. Just like I’m not surprised that Dean abandoned Cas, or that they both abandoned Adam.

Which brings us to the apparent theme of this season and one I’m excited about. Throughout this episode, two things are thrown around a lot, free will and responsibility. It’s an age old theological and philosophical question. Just because you can do something, should you? For example, a Mother could abandon her children; she has the freedom to do that, but she also has a responsibility to take care of her children. It’s a interesting direction for this season. Sam and Dean always selflessly help people, because they feel they have a responsibility to. If they don’t help, people will die. But at the same time they have been motivated for greater personal goals. Kill the yellowed demon, save Dean from his deal, avenge Dean against Lilith, etc. Even mundane things like, Dean trying to have a life with Lisa and Ben, or Sam leaving for college. These were things that Sam and Dean wanted and did, regardless of their other responsibilities. But pursuing your own goals isn’t necessarily wrong. It’s a complicated issue. Do Sam and Dean have a responsibility to help people, because they can, or are the free to live whatever life they choose?

Even within this episode we see Kevin make the choice to sacrifice his girlfriend in order to try (not even necessarily achieve) and close the gates of hell, forever stopping a lot of evil in the world. He could save a lot of people, but he also allows someone to die in the process. Does he have the responsibility to attempt to save the world or save his girlfriend. No matter what your own moral code this is a complicated issue and seems to be the theme of this season. That’s certainly a tough theme to tackle. Hopefully, the writers will do it well and will have a great season.

I anxiously await next week’s episode.

Until next time, SPN fans!

1 thought on “The Road So Far: Supernatural Season Eight Premiere”