Okay, moving on with my life and focusing on nicer, happier, excitingly feminist things happening in the Marvel comic book world, let’s talk about the new Captain Marvel.

So this lady with accidentally-got-them-from-an-alien-device superpowers named Carol Danvers apparently used to be Ms. Marvel for a super long time. But I’m not worried about that because I have never read a Ms. Marvel comic and know nothing about her and you don’t really need to either. What you do need to know is that she recently decided to promote herself to Captain and she is now in her own series, being billed as Earth’s Mightiest Hero. It is amazing.

So, weirdly enough, the first thing I read in Captain Marvel was… the first page of #1. And this one page actually made me stop and stare for like ten minutes, grinning like an idiot, and then go find my roommate and show her and babble a bit, and then stare a bit more before I managed to move on to page two. Okay, let’s compare Carol as Captain with Carol as Ms. Marvel. The image of Ms. Marvel is much more sexualized, with a more unrealistically proportioned body type, an outfit that isn’t exactly practical superhero wear, and her hair down. The image of Captain Marvel is just so much better to me in so many ways: her one-piece costume, despite still being skin-tight, seems so much more practical for crime-fighting than a bathing suit, opera gloves, and thigh-high boots (have you ever tried to wear them? They slide down the second you put them on!). Her hair is pulled back and up, also a more practical change. And the way she is drawn is less sultry and more confident and powerful. From the first page I was loving Carol Danvers as Captain Marvel.

And then I read the actual story, and I was hooked. 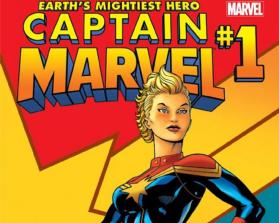 The first six issues deal with how Carol got her powers, her motivations and inspirations for being a pilot (because she was an Air Force pilot before she was an Avenger), and also focus a bit on her kicking some Axis Powers ass. Oh yeah, did I mention there was time travel? Although Carol is a modern-day superhero, in these first few issues she spends a bunch of time in WWII Japan with an all-girl all-American fighting squad, before bouncing around in time and space even more. It’s all a bit timey-wimey, but hey, I’m a Doctor Who fan. I saw the Star Trek reboot ten times in theaters. I like timey-wimey.

The most recent issue, number seven, starts a new story and is a good jumping-on point if you aren’t into timey-wimey shenanigans. Instead of time travel we have mysterious shipwreck shenanigans, Carol punching sharks, and Monica Rambeau (who apparently also used to be Captain Marvel but has since ditched the name?) who is also badass and awesome. (There’s some leeway taken with the biophysics of SCUBA diving that irked me a little, but I guess I’ll let that slide since, you know, shark fighting and Bermuda Triangle-esque underwater planewreck mysteries are pretty cool and all.)

Like I mentioned, Carol’s only been Captain Marvel for seven issues of her own book so far. And since it started pretty recently, there’s still a good chance you can get your hands on the back issues and get up to date if you’re interested. If you’re somehow not interested in reading about Earth’s Mightiest Hero yet, may I humbly mention that the amazing Kelly Sue Deconnick (also current author of the fantabulous Avengers Assemble ongoing) is writing it, and the art for issues five and six was done by Emma Rios, so by purchasing this you can support female authors and female artists and female superheroes all in one fell swoop?

Seriously. Go buy and read this comic right now. It’s great for longtime fans of Ms. Marvel (judging from the reaction in the letters to the editor in the back, at least) and a great introduction to the character for newbs as well.

7 thoughts on “So You Want To Read Comic Books 2.0: Captain Marvel”