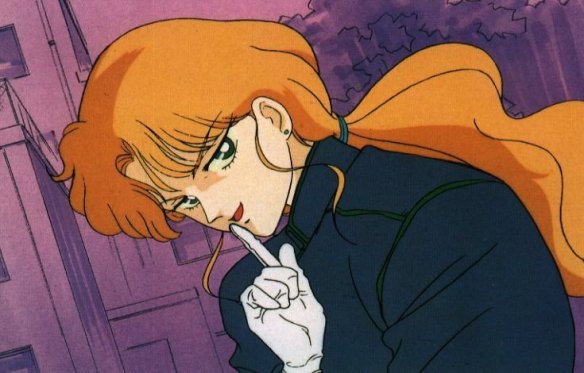 When DiC created the English dub of Toei’s anime Sailor Moon, many things were changed. Some of the changes were done to make the show more appealing to English-speaking audiences, but many were made to censor out elements which were deemed inappropriate for the show. One of the more glaring examples of censorship in the English dub of Sailor Moon is the handling of the character Zoisite (spelled “Zoycite” in DiC’s version). Zoisite was one of the Shitennou, or “Four Heavenly Kings”, and, in the anime, was romantically linked with the Shitennou’s leader, Kunzite. Zoisite and Kunzite were also both men, and therein lay the problem for DiC when they were creating the English dub of the series.

Since there was virtually no mainstream market for anime in the English-speaking world at the time Sailor Moon was being produced, DiC needed to make the show fit in with standard programming at the time. One of the standards of programming was that animation was for kids, so DiC marketed Sailor Moon to that young demographic. In doing so, there were many things that had to be changed about the show to make it more acceptable to parents, councils, and the like, so anything bloody was removed, words like “death” or “kill” were never used, and most examples of non-Western spirituality were toned down or cut out. With this approach to adapting the series, it’s pretty easy to see that the homosexual romance was never going to make it into the English version, so how was it handled? By making the man Zoisite into the woman Zoycite.

Most fans will point this out as one of the most insulting acts on DiC’s part, whether they’re dub supporters or dub haters, but to be honest, I’m not too angry about this decision.

Yes, this showed a disregard for the source, but so did the creation of the romance in the first place. It was an invention of Toei’s and did not exist in the manga on which the anime was based, so I’m not going to blame DiC for altering characters in their adaptation which were already altered from the original author’s intent. Furthermore, while I’m not condoning DiC’s censoring of homosexuality, I can understand why it was done. It was already a fight to get support for this show, there wasn’t a ready market for it, and there was just no way that it would see the light of day with something as controversial as a homosexual romance in the story. I think the fault lies just as much with the restrictive culture in which the show was produced as it does with any agenda on DiC’s part. Even today, whenever a whiff of homosexuality in children’s programming is detected, it causes controversy, so even if the writers at DiC had wanted to keep the romance and characters intact (and I’m not saying they did, nor am I absolving them of their censorship), it almost certainly wouldn’t have been approved.

So putting aside the fact that the change was made, and for dubious reasons at best, the reason I’m not too mad about this is that I like DiC’s Zoycite. For one thing, I adore her voice actor Kirsten Bishop, who played most of the main female villains in the English dub, even after the project was taken over by Cloverway in the third season. I think she has a great voice which doesn’t sound overtly evil but still has a steely edge to it, and she can convey a lot with her tone, but beyond that, I liked having a woman among the Negaverse’s generals.

Not only did the change make for more female representation on the villain’s team (since for once there was plenty of female representation on the hero’s team), but it made for a dynamic female character. Zoycite was honestly one of the best generals the Negaverse had. She was fiercely determined and succeeded in more of her missions than any of her predecessors; if not for the last-minute appearance of the Silver Crystal and the power-boost it gave to Sailor Moon, she probably would have succeeded in defeating the hero.

These things alone don’t make her

dynamic, though; she was dynamic because she was also flawed. Her determination to succeed drove her to arrange the death of her immediate predecessor and ultimately caused her own downfall, as she disobeyed direct orders from her leader in order to pursue her goals. Because of this she was not only the most successful of the generals, but probably the most evil as well; however, I consider this to be a strength of her character rather than a weakness. After all, a character doesn’t have to be good in order to be a good character. In my opinion, a possible definition of good character is one who is interesting, who has goals and pursues them, and Zoycite did just that. She showed a fierceness and proficiency that aren’t often attributed to female characters.

It would have been nice to see these characteristics represented by a homosexual person as well, since dynamic and well-rounded homosexual characters are hard to find in mainstream media, but since that wasn’t going to happen, I am glad they got to be represented by a woman. For that reason, I don’t hate DiC’s decision to change Zoisite into Zoycite.

10 thoughts on “Zoisite vs. Zoycite”