The further I look back at the start of my manga consumption, the more I realize that I didn’t exactly traverse a conventional path. Rather, I had pretty weird tastes, as is evident by this week’s pick: Yuzo Takada’s 3X3 Eyes. 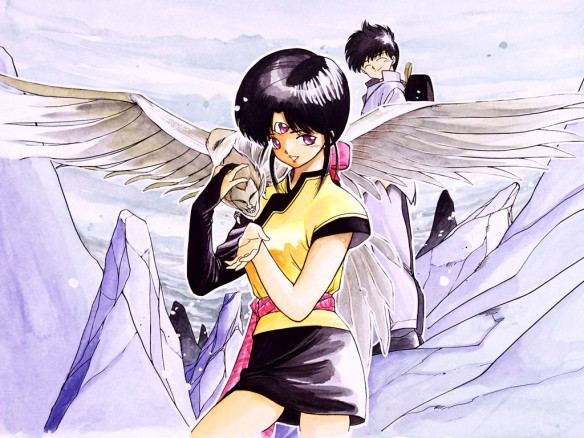 If I remember correctly, this was the second manga series I ever read. It had action, humor, good characters, but I’ll be damned if it wasn’t a bit confusing—although in a good way, as opposed to the terrible storytelling of Seraphic Feather. And, well, I suppose it would have to be at least a little bit confusing. After all, Takada created an entirely new mythos for a story spanning across several countries and encompassing a political plot as well as an ancient cultural coup. There was a lot to cover, and not all of it fit within the confined spaces of the comic panels.

The story starts with Yakumo Fujii, a normal dude with a part-time job and a desire to graduate from college. He also happens to be “getting over” the fact that his father, an archeology professor, has been missing for a while after traveling to Tibet. Yakumo’s stoic opinion on the whole matter, however, goes out the window once he meets Pai. Not only is Pai a foreigner who seems to literally know nothing about the culture of Japan nor have any common sense in her body, she also comes to him bearing a letter from his now deceased father asking his son one request: help turn Pai into a full human. As most every normal person probably would, Yakumo thinks this is a load of bullshit. Despite her very innocent, childlike wonder with every simple thing she comes across, Pai seems like a normal human already. However, according to his father, Pai is the last of her kind—the Sanjiyans or, in other words, a triclops. Before he can actually accept Pai’s quest—no one can resist her cuteness—the city comes under siege by a large flying creature that Pai seems to be familiar with. In fact, it turns out to be her pet, but this is only discovered after it tears Yakumo apart quite literally.

Desperate to find her release into a new life as a human and unwilling to allow the son of the professor she had gotten to know so well to perish, she awakens her powers, as well as her third eye. The next we see Yakumo, he’s completely healed save for a couple of bandages. It’s strange that he would survive that, but what’s stranger still is what actually happened. It appears that one of the powers of the Sanjiyan is to absorb a person’s soul through their third eye. This renders the person immortal but also places them forever into the service of the Sanjiyan that took in their soul. So Yakumo is now Pai’s “Wu” (undead servant) and now faces the same issue as Pai herself: he can only regain his mortality when Pai becomes human. Seeing no other alternative (and kind of getting into the whole “traveling hero” bit), they both head off to find the Ningen, the statue that holds the key to their humanity.

One of the best things about this series is that no matter how ditzy and silly Pai is it’s clear to everyone that she can take care of herself. It would certainly have to be so, considering how many people are after her for her powers and what she represents. She’s a wonderful character and plays really well off Yakumo (who is just about as equally stupid and silly).

However, what really takes the cake is how well thought out the mythos of this universe is, even taking cue from the Hindu religion in some places. For instance, Pai’s “awakened” form—she takes on another personality when her third eye opens—is called Parvati in a call back to the Hindu goddess of the same name. Also, there a lot of interesting cultural differences to take note of, not only between the Sanjiyans and humans, but between Yakumo’s Japanese familiarity and Chinese culture, even moving onto Tibetan culture as well.

Beyond that, this series has a lot to offer in terms of storytelling, as there are characters in abundance and even the villains remain interesting through long stretches of time. Unfortunately, Dark Horse Comics only managed to translate eight of the forty volumes before the series got cancelled in 2005, so much of the story remains unknown to me. Yet, what I did read was really quite interesting! So, if you can, I’d recommend looking into this hidden gem of action and fantasy! It always leaves you wanting more through its twists and turns, and with forty volumes under its belt, that’s a pretty impressive feat.