Buffy fans may remember that this actress played Kendra!

MadameAce: To start off, let’s talk about Ms. Morrell, Mrs. Argent, and Melissa McCall. Out of all the female characters, these three are the most minor. And while all three of them are certainly interesting characters, none of them are developed to their true potential. In Ms. Morrell’s case, that’s probably intentional. She first appears as the school guidance counselor a third of the way through the second season, in the episode “Abomination.” We know that she is intelligent, clocking in over 300 hours of field work, and she has a greater understanding of Classical Latin than most people, but not more than Lydia.

Though she eventually provides counseling to the other characters, Ms. Morrell is usually seen at work with Lydia, who is probably her toughest case yet. Ms. Morrell is smart enough to know when Lydia’s lying or trying to manipulate her, but not smart enough to figure out how to get Lydia to open up. Though to be fair, Lydia is a genius.

In the second season finale, it’s revealed that Ms. Morrell, like Scott’s veterinarian boss, Deaton, is also aware of werewolves and the supernatural. Both her role and Deaton’s role has yet to be explained. They associate with hunters, but they also help out the werewolves. Her career path certainly puts her in a position to be developed more in episodes to come. And like Deaton, her mission in life seems to be to help other people. But as of current, like Mrs. Argent and Melissa McCall, there isn’t too much to say about her.

Lady Geek Girl: Melissa McCall, Scott’s mother, is a decently developed character and, along with Ms. Morrell, is our only other female character of color. Her relationship with Scott and even Stiles is well done. She even deals with sexist teachers who imply that Scott is lacking at school because he doesn’t have a male influence at home. She doesn’t feature as much probably because she doesn’t know about werewolves and the supernatural, but that changes near the end of season two and she starts to play a more active role after she discovers her son is a werewolf. Hopefully, she will become more active and play a bigger role in season three.

Victoria Argent is one of the characters I was more disappointed with. Her relationship with Allison is hardly developed and most of the time she’s just portrayed as being merciless. She even attempts to slowly kill Scott with wolfsbane, sweetly talking to him while she does it. We, the viewers, only starts to sympathize or feel bad for her after she is bitten by Derek during fight and decides to kill herself rather than become a werewolf. It’s really disappointing that we only start to sympathize with her when she is dying.

And then there is Kate Argent. When Kate first appears you think she is going to be this awesome female character, when in actuality she is a terrible person. That’s not to say she is a bad character. Just a bad person. She is a good villain, but is pretty flat, and we are supposed to feel no sympathy toward her.

MadameAce: Kate Argent is entirely underdeveloped. We don’t know why she does the things she does. She enjoys it, but why she enjoys it is never answered. We know nothing about her other than that she likes to kill werewolves and she’s willing to murder normal people and children in order to do it. Other than Peter, she is the primary antagonist of the first season.

Though Kate is all kinds of evil and crazy, she is shown to love her family in some regards, and she looks genuinely scared for Allison when Peter threatens to kill her if Kate doesn’t apologize for burning his family alive. Werewolves can hear heartbeats, which allows them to know when someone’s lying. After Kate apologizes and Peter rips her throat out, Peter still plans to kill Allison because Kate’s apology didn’t sound apologetic. It’s possible that Kate was fearful for Allison, because she knew she wasn’t sorry for burning down the Hale home. Or it is entirely possible that she was just scared for herself. It’s hard to tell when a character’s personality can be mostly defined by the word evil.

Kate is active, I’ll give her that. She tells Allison about werewolves, after dropping her hints through most of the season. But she only tells Allison after Allison says she doesn’t want to be weak. I’d like to theorize that maybe Kate at one point felt weak and helpless and only got control of her life back through ruthlessness. Kate’s brother and Allison’s father, Chris, mentions at one point that their father, Gerard, twisted Kate into the person she is when we first see her. In the second season, we see Gerard twist Allison into being just like Kate, so it’s entirely possible that Kate actually started off as a sweet girl who wasn’t prone to unnecessary, murderous violence. But this is never really explored.

I’m not sure why shows feel the need to feature an underdeveloped antagonist for its first season. It’s a sure sign that that person’s going to die in the finale, for starters. Teen Wolf had two antagonists: Peter and Kate. And considering Peter’s backstory and his motivation for revenge, we can understand where he’s coming from at the very least, so it’s hard not to develop him. The downside to this is that Kate ended up being pretty boring. And to avoid confusion, I think this was done on a marketing standpoint and not because of sexist notions.

Lady Geek Girl: Then we have our main female characters Erica, Lydia and Allison. Technically, Erica is still a supporting character, but she plays a bigger role than the others we have mentioned so far. Erica is the first female werewolf we get to see. Laura Hale is mentioned, but we never actually get to see her act as a werewolf (though rumor has it that season three will have a flashback featuring Laura), so for all intents and purposes Erica is our first female werewolf.

I have noticed that many people in the Teen Wolf fandom don’t seem to like Erica and view her as “the school slut.” This is what we call slut-shaming, and, while the fandom does do it, thank God that the show never does. Erica starts as weak, unpopular, and (by ridiculous TV standards) unattractive. After she becomes a werewolf she becomes extremely sexually attractive and starts exploring her sexuality. In some ways, the show comments on how shitty it is that nobody ever noticed Erica before. She challenges Stiles, telling him about how she had a huge crush on him, but he never noticed her, ignoring her in favor of popular and pretty Lydia. Erica, though seemingly aware of these unfair beauty standards, doesn’t really worry about them. She wields her sexuality like a weapon around most of the men at the school and uses it to her advantage.

Now, I’m not going to support using one’s sexuality to manipulate anyone, but Erica is acting as someone typical for her age. The werewolf, in Teen Wolf, functions as a way to talk about puberty and maturing. There can definitely be a point in a teenage girl’s life where she realizes she is attractive to people and uses that and revels in it. It’s not the best but it is a part of growing up, and Erica exemplifies this perfectly. Furthermore, Erica doesn’t manipulate the men she actually cares about. She legitimately seems interested in Derek before he rejects her, and there is some indication of at least a mutual sexual attraction, if not romantic attraction, between Erica and Isaac, and Erica and Boyd. Thankfully, the show never shames Erica for exploring and enjoying her sexuality, even if the fandom does sometimes.

However, not all of the storytelling surrounding Erica is perfect from a feminist perspective. Derek and Erica’s relationship has its issues.

MadameAce: Derek bites Erica while she’s in the hospital after having an epileptic fit. First he gets her into a room where they can be alone—which is understandable, as he’s about to turn her into a werewolf—but he doesn’t just change her. He seduces her. He runs his hands along her legs, eventually grabbing her legs and pulling her toward himself. And the entire scene becomes very sexual. I usually like to praise Teen Wolf for holding up healthy relationships and frowning upon the unhealthy ones, but I can’t here. 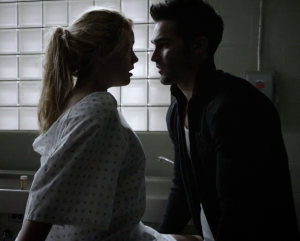 You were eleven when I was eighteen. This isn’t creepy, right?

Later on after she’s turned, during a training session, Erica kisses Derek. At first, Derek returns the kiss. Then he throws her off of him and tells her not to do that again. To make it worse, he also says he has someone else in mind for her. The hell? Whoever this person is, we never find out, but I have to question what’s happening here. I don’t see Derek trying to play matchmaker for Isaac and Boyd. And it is really upsetting to see the fandom shame Erica for her sexuality, and I wonder if both these scenes play a part in that. In this case, I argue that Erica is the victim, and we should stop slut-shaming people, fictional or otherwise.

Teen Wolf seems to have swept these scenes under the rug and doesn’t ever address them, nor do I think it will, since Erica will sadly not be returning next season. But though some problematic issues have cropped up here, the show does a much better job with other female characters.

Lady Geek Girl: Teen Wolf in general has great female characters and good storytelling, even if there are some issues. I respect how hard the writers seem to try to create these interesting characters. Next Saturday we will discuss Teen Wolf‘s female characters as well as explore some other feminist themes. See you then!

And make sure to let us know what you think of the feminist themes of Teen Wolf in the comments.

2 thoughts on “Teen Wolf and Feminism: Is It This Generation’s Buffy or Does It Need to Be Slayed?”