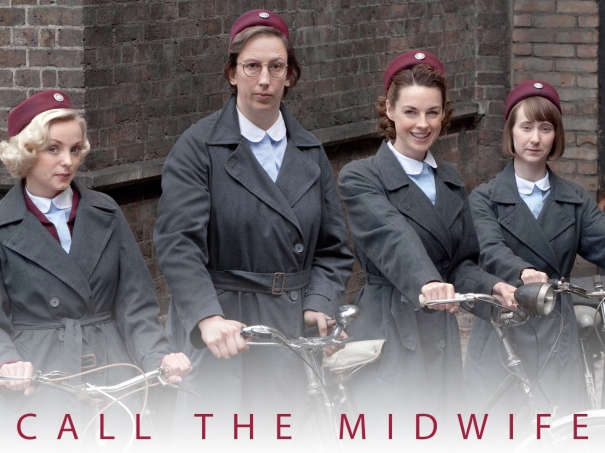 You know that mythical unicorn of a show, the one that has a mainly female cast, with diverse characters, women who aren’t defined by their relationships with men, and a high quality of production? Call the Midwife is that show.

Call the Midwife might not be the typical geek show, but it’s one that all geeks (especially girl geeks) should pay attention to. It’s another period drama from the Brits, a BBC creation in the same family as ITV’s Downton Abbey, but for some reason it hasn’t caught the same popularity wave in the US. Based on the memoirs of Jennifer Worth, the show follows newly-minted midwife Jenny Lee as she dives head-first into serving the residents of the East End of London during the 1950s. Jenny lives and works with a group of Anglican Sisters (of the nun variety), whose primary work is nursing and delivering the hundred or so babies born each month in the Poplar district. The first series of 6 episodes aired in early 2012 in the UK, the second series of 8 in early 2013, and the first series aired on PBS in late 2012. A third series is planned for 2014. So far I’ve only seen the first series, via Netflix.

So why is Call the Midwife all kinds of awesome?

1. Given the subject, it’s remarkably feminist. You wouldn’t expect a show that revolves around birth and babies to be so empowering, but it is. Although lots and lots of women have babies, it doesn’t limit women to the role of mother and wife, nor does it portray it as the “highest calling.” One midwife remarks that she thinks the mothers they serve are the real heroes, for bravely facing the impossible situations in which they find themselves. It’s not simply being a mother, but courage, perseverance, and resourcefulness in the face of pain and want that makes them worthy of praise. The first season explores the idea of a calling; many women (including Jenny) are searching for meaning and purpose. Some find it in being a wife, some a mother, some a religious Sister, and others in their work. All of these “vocations” are presented for what they are, different paths for different people. What matters is figuring out which one is right for you.

2. The Villain? Poverty. Much like Downton Abbey, the big villain in Call the Midwife isn’t a person, but something much broader. In Downton Abbey, however, the problem is usually quite specific for the individual characters (We need an heir! We need money! A daughter needs a husband!). In Call the Midwife, poverty affects the lives of everyone in the district, whether that means you live in a condemned building with the bugs or can only afford canned salmon for when a midwife’s well-to-do mother comes to visit. It’s more real and more cruel. We see Jenny’s range of reactions to it, from disgust and revulsion to righteous anger to gritty toleration.

3. It doesn’t downplay (or overblow) religion. Jenny lives and works with a group of Anglican Sisters at Nonnatus House, even though she has no real interest in taking vows herself. Call the Midwife regularly shows the Sisters praying, chanting the Divine Office, in full formal habit. The head of the Sisters’ order is portrayed as wise and kind. Some of the midwives listen in and pray themselves during particularly tough situations. There’s a particularly touching scene where many of the midwives get ready for a dance, and after they leave a younger Sister takes off her veil, glasses, and shakes out her hair. It’s clear that becoming a sister, a choice she doesn’t regret, hasn’t erased her own femininity. Religion is just another part of life for the residents of Nonnatus House, whether or not one participates in it.

4. The women aren’t uniformly young and pretty. BBC didn’t go out of their way to find drop-dead gorgeous actresses for the whole cast. For the two midwives who are traditionally beautiful, it makes sense with the characters. One midwife is very much into fashion and romance, and Jenny remarks at the beginning that she turned down a chance to be a model in Paris because “being a midwife seemed easier.” Another midwife is a refreshingly-normal plain Jane. And still another midwife is tall and broad, and the show touches on body image issues with her character in a very affirming way. The main romantic subplot doesn’t belong to the pretty girls, but a homely one. Some sisters are old and some are young, and all are treated as important, developing characters. Even the eldest Sister with some form of dementia is treated with the utmost care and respect, something that features prominently at the end of the first series.

5. The men aren’t too bad, either. There are a handful of male minor characters in the show, and they all serve to support the pro-female messages. Jenny has an old male friend come visit her, and while he has romantic affections for her, he doesn’t make a big fuss about being “friendzoned” and actually helps her out when she needs it… like a friend would. A man’s proposal is turned down, and he doesn’t press the issue. The local overworked doctor is a man, and while there is a long-standing rivalry between doctors and midwives (even to this day), he more than appreciative of the services of the midwives, praising their skill.

Call the Midwife serves as a model for the type of pro-female show television desperately needs. Although the show could use more characters of color, it does include a Latina mother and touches on issues of racism with a black child born to a white mother. It’s been nominated for a pair of BAFTAs and won a pair of UK TV Choice awards. Caitlin Moran of The Times has said, “There’s an argument to be made—by me, now—that lovely Christmas special-y, cover-of-Radio-Times sensation Call the Midwife is actually the most radical piece of Marxist-feminist dialectic to ever be broadcast on prime-time television.” You’ll have to decide for yourself whether or not she’s right.

2 thoughts on “You Should Watch This: Call the Midwife”