“Think of the American lives you will save… Do not consider what we did to you.”

Two weeks ago Wednesday, news came that Robert Morales, Marvel Comics author and entertainment journalist, passed away at the age of 55. Samuel Delany, author of too many science fiction novels to name, broke the news on Facebook:

Robert Morales was one of my closest friends—and had been since he was seventeen years old. He died at his home in Brooklyn this morning, leaving his father and mother. He was fifty-four. We spoke on the phone for many years, at least once a week and often more. I am shattered. His many friends will miss him deeply. He had agreed to be my literary executor, and the idea that he would pre-decease me never entered my head. For me and many others he was an indispensable friend. To say he will be deeply missed is an incredible understatement.

My comment on his passing is not timely. It is a fortnight late and the story of his death has been covered by at least ten other websites. All I can say is that Morales was a creative powerhouse and he, his inspiration, and his passion will be missed.

Morales’ legacy, however, lives on. His work with artist Kyle Baker, Truth: Red, White & Black, is one of Marvel Comics’s most compelling ventures into the subject of race in America. Truth reveals a backstory for the Captain America mythos in which the Super Soldier Serum was tested on Black soldiers in secret, resulting in the death and mutilation of all but a few.

Truth takes every opportunity to challenge the reader’s knowledge of the history of race in this country. The work draws upon the politics of the Tuskegee Syphilis Experiment, a forty year clinical study conducted by the U.S. Public Health Service, in which 399 Black sharecroppers were used to study the progression of untreated syphilis while being told that they were receiving free medical care. The men were prevented from seeking treatment for syphilis, were forced to submit to spinal taps, and were manipulated into submitting their bodies for autopsy after death. The study continued for twenty-five years after penicillin was established as the standard treatment for syphilis, and none of the patients were ever treated. Only seventy-four subjects survived the experiment. 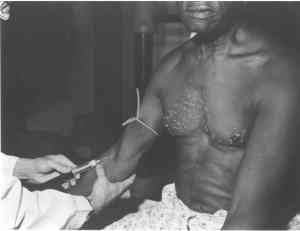 An unidentified subject of the Tuskegee Experiment, visible syphilis rash on chest.

In the comic, three hundred Black soldiers are the subject of experiments with the Serum. Most of them die in the experimentation or soon after, and the ones who remain are hulking, muscular figures whose individual faces are their only remaining distinguishing feature. These survivors are sent on secret missions in Europe to disrupt Germany’s program to develop their own super soldiers. They cut a bloody, costly path across the continent, while monsoons keep Steve Rogers (who was to lead their unit) trapped in the Pacific Theater. They die as victims of battles, mishaps, and their own infighting until there is only one left: the Black Captain America, Isaiah Bradley.

And he is a hero. Isaiah Bradley is sent on a suicide mission, wherein he cracks skulls and set explosives in a Nazi laboratory with such brutal efficiency that the Nazis believe that they are being aerially bombarded. His capture comes after an attempt to rescue camp internees goes wrong and he is trapped inside a gas chamber. He is brought before Hitler and Goebbels and faces a plan to castrate him and send him back to the Allies in pieces. He performs these deeds of derring-do, and rebuffs the Führer himself, all in the name of family and country—a country that betrayed and exploited him. 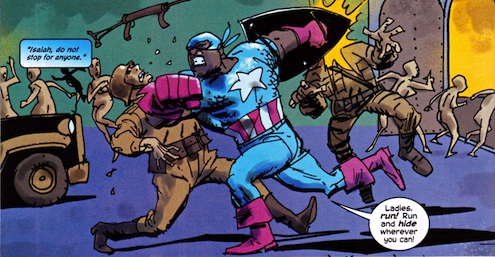 This is the story behind Truth: African-American soldiers have fought and distinguished themselves in every war our nation has fought, through exploitation and betrayal. Broken trust is the backdrop of all seven issues. The comic opens with the civilian lives of the men who will become test subjects, and shows the racism they encounter, just trying to live their lives and be Americans. Then, as soldiers in their barracks, these young soldiers learn about the Red Summer, about violence against Black soldiers who came home from fighting in 1919, and the very real danger of being lynched in uniform after serving their country. There is the sense, true or not, that these men can do nothing that will allow them to be full members of American society.

The burned, mutilated body of Will Brown—one of many victims of the 1919 Red Summer

If you’re saying to yourself, “That’s really heavy, and it sounds like a lot to try to fit into seven comic books,” you’re right. Truth is dense and meant to be educational. To that point, the trade paperback features a section at the end to discuss its relationship to historical fact, designed to send the reader running to more in-depth sources. It’s fantastic that so much work goes into challenging the reader and demanding a more elevated level of thought than one might expect from a comic book. The writing strains a little under the weight of all this information, but not enough to keep me from being engaged.

I’m a big fan of the storytelling in Truth. It is ambitious, aiming to educate, challenge, and entertain. It accomplishes all of these goals to varying degrees, but perhaps it sacrifices a little of the third for the sake of the first two, although I think that’s all right. The pacing is well-organized, cool at first and steadily gaining intensity as it approaches the climax, while competently balancing exposition and action.

Kyle Baker, who has worked on Deadpool Max, Plastic Man, Hawkman, and other titles, provides the rather jarring and occasionally symbolic art. At times it is cartoonish, and just odd enough to give a sense of unease and in other places powerful and arresting. Several images from the scene in the Nazi laboratory are particularly intense. There is a clever variation to the art styles between issues of the comic. The first issue’s art is characterized by a focus on headshots and facial features, exaggerated to show the depth of various emotions, whereas the second issue might owe a little more to newspaper comics like Beetle Bailey, though the art is more fully realized in terms of detail. However, you shouldn’t let any “cartoon” elements fool you into thinking that those sections are less grave or serious. Several times over the course of the series, that “toon” feel is juxtaposed with grave content to startling effect.

Truth: Red, White & Black is a dark, sad tale that brings together many of the reprehensible parts of American history with the mythos of one of my favorite superheroes. That being said, it ends with a poignant conversation between Faith Bradley (Isaiah’s wife) and Captain America, that while in many ways is as depressing as the rest of the story, ends on notes of duty, honor, and long overdue recognition.

What’s most exciting to me about this was Marvel’s decision to make it part of the official canon for Earth-616. It’s an official recognition of how important and how cool the ideas in Truth are. When it was first published, back in 2003, there was a lot of concern, most of it in reaction to the cover image, that this story would besmirch Captain America, or somehow make Steve Rogers look bad. Rather, it’s done just the opposite. It’s made the history of Captain American more complete and more true to the complexities of the era in which he lived and it’s given the Marvel Universe a few more superheroes in the process (Josiah X and Patriot/Elijah Bradley, of the Young Avengers).

Truth, I must admit, reaches me on a very personal level. As an African-American, there’s a lot in this work about reclaiming and retelling lost narratives. It allows for the discovery of new heroes and new perspectives. It helps me to understand what the unsavory cost of freedom has been.

When I was younger, it was important for different reasons. When you’re growing up, you want heroes that you can identify with, and for some, it’s very important to have heroes that look like you. At 14, the idea that Captain America could be a Black man was a game-changer. Diversity and inclusion in comics about heroes are important because comics are like the old myths: they are stories of heroes, what we can aspire to become and accomplish. It’s best when everyone can say “I’m a part of that.”

Information on the passing of Robert Morales comes via The Beat.

If you want to buy the trade paperback, you can do that here. I really recommend reading it (though it is a little expensive to get your hands on it).