In my fifteen or so years of participation in geekdom, I’ve learned that there are two universal truths.

1. There are infinite shades of nerdity on the geek spectrum.
2. There are many people out there who still don’t get it.

Being a nerd was always part of my core identity, though I took pride in calling myself a “nerd” over “geek.” Geeks were socially awkward, not smart, like me (doesn’t that sentence just radiate hypocrisy?). I prided myself on being some kind of upper echelon of social outcast, defining myself through criticizing others. It didn’t matter that I never actually envisioned who that social outcast was who sat on the lower rung of the social ladder. I wasn’t like “those” weirdos, whoever they were.

So it really wasn’t a surprise when similar feelings resurfaced when I was invited to go check out Free Comic Book Day. My introduction into geekdom was through books. As a kid I read everything I could get my hands on. I remembered a lot of it, too. I even captained my high school knowledge bowl team (though we always said that we never participated in the state tournament, just hosted it). Like a huge cross section of today’s geeks, my first bite of pure geekdom was through fandom. Harry Potter sent me on a wild journey of anticipation and fanfiction and staying up all night for book releases and movie premieres and digging through a bin at Goodwill for the perfect tie to compliment your costume. Books and movies and TV shows were my geeky purview. But comics? No, those were what weird old smelly guys in their basements liked. Those weird, old, smelly, misogynist guys.

So when Lady Geek Girl texted me an invite to meet up with her at our local comic shop for Free Comic Book Day, I hesitated. Sure, I knew plenty of “normal” geeky people who loved comics. But that wasn’t for me. I loved superhero movies, but getting into the comics just seemed too massive. As a medium, it seemed too foreign for me to bother with. But the Boyfriend was in town, and I knew I’d need something for us to do, as we’d exhausted the museum, the campus, various eateries, and other local attractions. After running the idea by him, we decided to go.

When we got to the shop, the line was out the door (of course it was! It’s Free Comic Day, silly!). Free Comic Day is the first Saturday in May—where comic book shops give out a featured selection of free comics and other swag to encourage new readers to check out a new series and to get the reluctant (like myself) through their shop doors to make some purchases. Surprisingly, about half of the people in line resembled our friend Jeff Albertson. Yes, it was disgusting and shallow of me to notice, and even worse to wonder, at the idea that the comic book guy stereotype was based on some shade of reality. But I snapped back into Decent Human Being mode when the Boyfriend made some comment while waiting in line. I remembered that even though I was outside my own comfort zone, today I functioned as his Ambassador to Geekdom, and needed to act like it. So what if most of the geeks I was used to were young, sexy, and landed Mini-Cooper-sized Rovers on Mars? 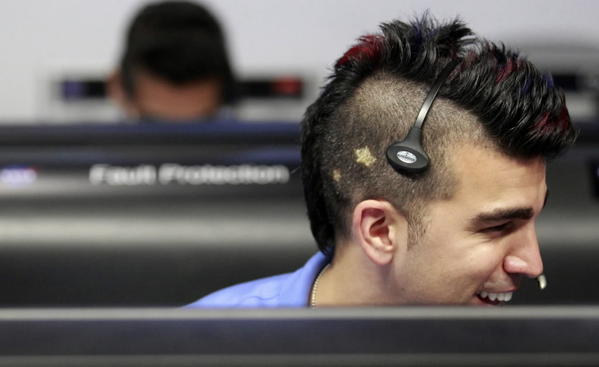 I love you, Bobak.

After a good fifteen minutes in line, we decided that the free comics we had come for wouldn’t be nearly as exciting as looking through the store and catching up with our friends who were already there. As we made our way to the back entrance, everyone was incredibly polite to us and our obtrusive wandering. We found Lady Geek Girl, and she and I immediately began gushing over all things fandom, while the Boyfriend awkwardly stood by, looking at things. LGG directed me toward a few different sections of potentially-interesting comics, and I began my first hunt through boxes and boxes of comics for a diamond in the rough. I first searched for some Firefly comics, but alas, to no avail. I asked a kind store clerk about some Supernatural comics, and he showed me where they would be located (“Horror” section, apparently). LGG then pointed out multiple Doctor Who sections, and suddenly I had died and gone to comic heaven. I immediately pulled out one, two… five consecutive comics, eager for new material but mindful of my wallet. Realizing I had all but abandoned the Boyfriend in a strange land, I turn around in search of him… only to discover him nose-deep in some Indiana Jones back issues, one hand in the box and the other holding his phone, scrolling through Wikipedia in search of a particular title. Even my preppy jock boyfriend had fallen under Free Comic Book Day’s spell.

It shouldn’t have come as a surprise to me, but really, all fandom is the same. Some fandoms might be new, others may go back decades and decades with generations of fans. But one of the greatest joys of fandom is being a beginner, of discovering a new world in a book or a comic or on your screen. Being a geek or a nerd is about embracing the fact that you are passionately in love with something. Geekdom transcends all social barriers. It’s one of the very few things in life where you can say that within it, there is something for everyone.

2 thoughts on “Adventures in Geekdom or: How I Learned to Stop Worrying and Love Comics”