After The Avengers came out, many people discussed Captain America’s famous line about God and Thor. 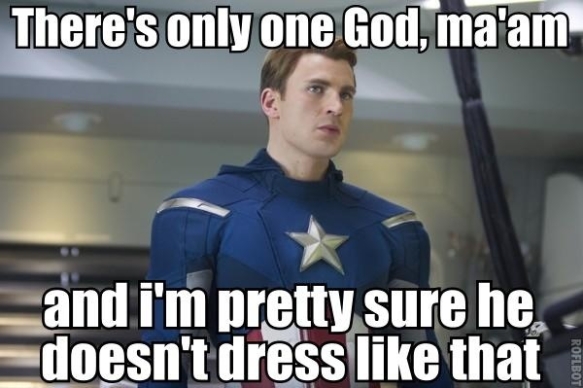 Some people were surprised that Joss Whedon, an atheist, included the line in the movie. Others were either pleasently surprised or dismayed at the inclusion of religion in the Marvel Movie Universe, but the most interesting response, and the one I’m going to address here, is: How can Captain America still be a monotheist when he knows two gods personally? People also pointed out that characters like Iron Man, who is typically written as atheist, would also have issues coming to terms meeting two gods.

In the comics in general, a variety of religions are often included or referenced. In the Marvel universe there are mentions of Christianity, Norse Mythology, Greek mythology, Judaism, Islam, and other forms of Paganism and Wicca. However, despite all these religions being referenced, it is usually the pagan religions that are “proven” when characters actually meet the gods they learned about. For today I will just address religion in the Marvel Universe since each comic book universe deals with religion a little differently. 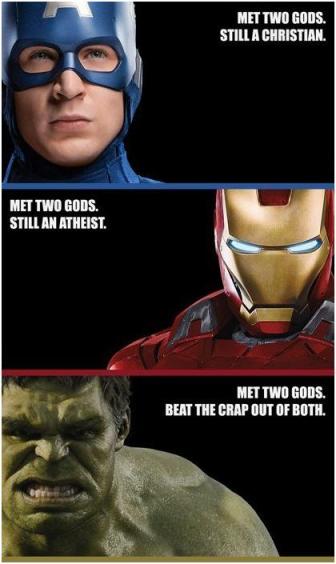 In the Marvel Universe, when religion is introduced, it’s usually through various mythologies that most people today don’t follow (though admittedly some still do), such as Norse mythology or Greek mythology. The presence of characters like Thor shows this tendency to take great myths and heroes and turn them into primary characters in comics. The reason for this has less to do with religion and more to do with storytelling. Myths have larger than life characters that make for great stories. On the religious end of it, the writers are less likely to offend anyone by focusing on religions that most people don’t follow.

Mainstream religions are either shown through personal faith or through the evil characters in their religions. The most you’ll see of Christianity, Islam, Judaism, and other mainstream religions is through personal faith. Nightcrawler is shown as a Catholic and Kitty Pryde is Jewish, but more often than not when elements of these mainstreams religions are brought into comics, it’s always the evil aspects of them. Mephisto, who clearly represents the Christian devil, is often depicted as a villain in the Marvel Universe.

So how would this affect the faiths, or lack thereof, of the heroes? Well, it depends on the version of certain characters. Thor in the movies could just be viewed as an alien who people mistook for a god. That could mean that all gods, no matter the religion, could actually be aliens, or something else humans didn’t understand, but I personally believe that humanity wouldn’t largely default to atheism. Religion answers the questions of “who made us” and “why are we here”, so it’s likely that if many gods like Thor are revealed to be aliens, people would still believe in some type of higher power, even if they left their original faith. An atheist in this situation would probably feel the same way, except they would continue to not believe in a god. And perhaps their faith in atheism would be bolstered by the proof that at least one supposed god isn’t really a god.

However, other versions of Thor actually say that he is a god. Asgard is not another planet,

but another realm entirely, where gods exist and magic is wielded. Even here, though, there is very little that reflects religion. Thor doesn’t want anyone to worship him, and neither do any the other gods (except for Loki), and no devotion to Thor begins in the Marvel universe when it is revealed that Thor actually exists. That is what I find most surprising in the Marvel Universe, that no people actually start worshiping the Norse gods again after Thor appears on earth. Furthermore, many other gods appear in the Marvel universe. What then could Marvel’s heroes make of that? It makes sense that Captain America would still believe in the Christian God (especially if people like Mephisto exist), but he might have difficulty remaining a monotheist. Cap could also believe that maybe there are many gods, but the Christian God is the original or most powerful. Or he could even believe that despite people like Thor calling themselves gods, they aren’t really “gods” in any true sense.

Probably the hardest question to deal with is the same as one of the hardest we deal with today: Why does God let bad things happen?

And if Thor is actually physically present to battle evil, I think this question would be the most difficult to answer. Why isn’t my God stepping in to help people?

Religion in the Marvel universe or any comic book universe is a tricky and complex topic, and sadly one that isn’t always thoroughly explored, because of fear of offending people. But it’s still fun for us nerds to wonder about and discuss, and maybe one day these ideas will be more thoroughly explored in comics. 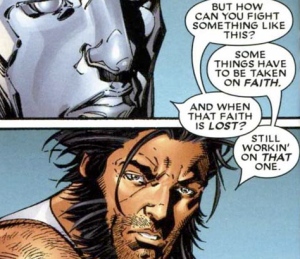