[This is chiptune rock, which might not be your thing. The lyrics sort of make the point, and you can just look them up.]

It’s always scary, seeing a ghost. Not a literal ghost, as I’ve never seen one, but something you thought was dead and gone away. You see, I thought we had put the “fake geek girl” problem to rest. I assumed that it was broken down, dismissed, and relegated to the darkest corners of the places for which I have no time. Even Cracked tore this one to shreds, and this was some six months ago. So I had assumed that we were collectively over it.

I am not, however, over the Too Late To RuPaulogize video. Look it up.

It turns out that this was nothing more than a egocentric dream, the folly of a mind that occasionally assumes that everyone is a feminist, or that everyone knows that President Bartlet would be the best president ever. Of all time.

Back in November 2012, comic book artist Tony Harris wrote a rant (read: vomit-inducing, misogynistic tripe) on Facebook. This seemed to be the culmination of a season where what even Forbes Magazine called “Geek Gatekeeping” was on everybody’s lips (including Lady Bacula‘s). Then, in an effort to spread his sexist, body-policing brain diarrhea, Harris asked his twitter followers to read and retweet it. We were talking about this fake geek girl bs all through the winter, according to my extremely scientific research method of checking Google Trends for “fake geek girl” and “fake nerd girl.” By March, It had sort of faded from my view. It had been discredited all over the internet, and I figured that was enough.

We all know what happens next.

But then, this problem returned to my inky realm a couple of weeks ago. And because the personal is always political and vice versa, it came in the form of a dismayed friend.

Picture your hero Ink sitting in his favorite local coffee shop, the pride and joy of a vegan locavore collective, sipping his fair trade coffee, and waiting for the rest of the planning committee of a local non-profit to show up. He sits in silence, contemplating the person to whom he has lent his copy of Truth: Red, White & Black and whether they will return it in good condition. One of his compatriots, a young lady also on the planning committee, sits down next to him, and begins the following exchange, paraphrased for your convenience:

Compatriot: You like comic books, yeah?
Ink: Very much so.
Compatriot: Do you know <gaming and general nerdery establishment>?
Ink: Yeah, that’s where I bought my first comic book, actually.
Compatriot: Is there some test I have to pass? I went in looking for a book and had some trouble because I guess I don’t know as much, and I was laughed at and asked “why are you even here?”

“Is there some kind of test I have to pass?” Our conversation continued beyond that point, but for the past week I’ve been thinking about my answer, a perturbed “apparently so”. I wish I had a kickass story to tell you like this one, or an embarrassing-for-the-nerd-police story, like the one where Natalie Portman “needs to stop” fronting like she knows about Star Wars.

The “fake geek girl” phenomenon has always turned my stomach, though I guess it makes sense to me. Actually, that’s the worst part: I do understand it. There’s a psychology of ownership and authenticity to the rejection of newcomers and supposed imposters that The Mary Sue explains better than I ever could. Over there, Dr. Andrea Letamendi gives three reasons why so many nerds are so fearful/defensive of those they see as inauthentic.

2. Those fearful of newcomers have a “misinterpreted sense of ownership”, that what is theirs is being encroached upon, or that it belonged to them in first place.

3. They “resent the changing culture.” It’s easier now to be a nerd; that, or nerdiness doesn’t look like it used to. Perhaps it’s no longer a refuge, discrete from mainstream entertainment culture. I don’t believe that it ever was, but it gets used that way. I used anime that way in high school.

It was the Mary Sue article that made me realize that maybe I did understand the rejection of “fake nerds”. When I was eleven or twelve, I discovered peer-to-peer sharing. Bittorrent, Kazaa, Limewire; I had discovered a bevy of ways to fill my computer with music, movies, and shiny new spyware. This was the same year that I discovered anime, and maybe a year after I discovered video games. I was asking my brother, who is ten years my senior, a lot of questions about these things and he had very little patience for me.

I ran, like a little baby, to my mother. She explained that he was mad at me because all of a sudden, I was into all the same things as him, and people like me “were making it harder for him and his friends”. See, my brother has always been computer savvy, and was torrenting long before I got into piracy. This was about the time that the RIAA and MPAA started to crack down, filing lawsuits and running inane and counterproductive advertisements:

At least after the “Don’t Copy That Floppy” era.

I was just one of many, many people to discover the sweet temptations of internet piracy at that time. Increased levels of illegal downloading motivated organizations to lay down the law, as it were. This made it more difficult for the newcomers and for the old pirates, the Blackbeards—I was just Jack Sparrow, drawing more attention to piracy than hundreds of Somalis with rocket launchers could. 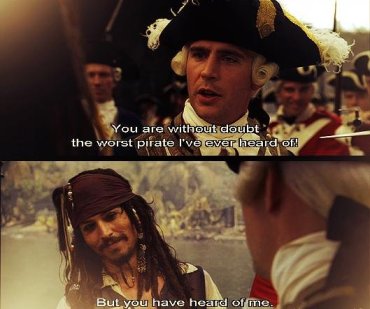 My brother resented me because I represented what was to him a mass of unskilled and ostentatious newbies, who had 1. made piracy more challenging, limiting his ability to pirate with impunity, 2. interloped in a space that he saw as belonging to him and his friends, and 3. become a part of online communities, torrent websites and the like, changing the tone and demographics of those communities. Check, check, and check.

But it wasn’t just piracy. Similar things were happening in anime and gamer fandom communities, both on and offline. All of a sudden, the crowd down at the comic shop was different. My brother was not pleased. Our relationship has since improved, in part because I can beat him at fighting games now. Well, I win at Soul Calibur and SSB. He still kicks my butt in Capcom fighters. But, I remember the resentment because it was so hurtful to be rejected for being new and unskilled when I wanted so badly to be accepted. If Simon Pegg is right and “being a geek is all about being honest about what you enjoy and not being afraid to demonstrate that affection”*, it can be devastating when that affection becomes a liability.

In fact, it’s a sick bit of irony. Back to the Mary Sue article, I’m certain that many nerds “grew up hiding [their] geek identity for one reason or another. Maybe we felt insecure; maybe we got bullied for being ‘out.’ Some of us hid or masked our identities as geeks well until adulthood.” Those who have been there since the beginning? The boys who got pushed into lockers and the girls who had their glasses broken? What do we get for having endured a personal hell for liking comics, or computers, or knowing that Clare Raymond (TNG, s01e26)’s genealogy happens to include the names of the first six actors to play The Doctor? 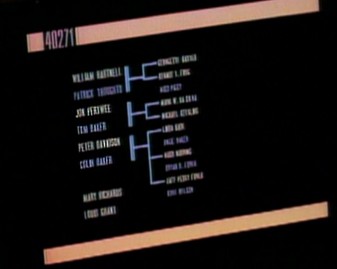 Seriously. Zoom in. It’s kind of hard to make out, though Colin Baker’s name is pretty clear.

I understand that it feels good to turn the tables. I, for my part, get a fair amount of pleasure from comeuppance, almost as much as I get from an opportunity to use the word “comeuppance.” The problem is this: If we reject newcomers to geek culture because they represent our fears or because they don’t conform to our idea of what a geek should know, look like, or have to endure, we haven’t improved anything. Being mean-spirited is not uncommon, but it is childish. Geek culture is a big kid now. Every day, we not only step further into the mainstream, we define it more and more. The geeks have inherited the earth. Many of the planet’s top-paying jobs are in STEM fields. Comic books, anime, cosplay, Sherlock, The Avengers, Supernatural, and a million fandoms that would not have been nearly as salient a decade ago are inescapably popular. That’s what we get. The rest of the world realizing that what we’ve always known was freaking awesome is pretty damn cool. Our culture has had plenty of time to mature, and we need to start acting like it.

Now, there’s absolutely a number of angles that I’m not covering, for example, that this “fake geek girl” issue most often comes up in terms of women cosplaying, which seems to imply a mistrust of women, a fear of their sexuality, and a need to police their bodies. Fortunately though, I have this video to take care of it for me. If you haven’t seen it, this is a must-watch:

The Bleeding Cool describes it as “Tony Harris’ worst nightmare.” I must agree. This is a great video that, among other important points, raises the question of why anyone would pretend to read Aquaman comics.

Aquaman is actually a badass, but I can’t pass up this opportunity.

So, this week’s harrowing tale ends like this: I called my friend my back today and said “I need to change my answer to “No, there’s no test. Fuck those guys. Haters gonna hate. Make good art.” 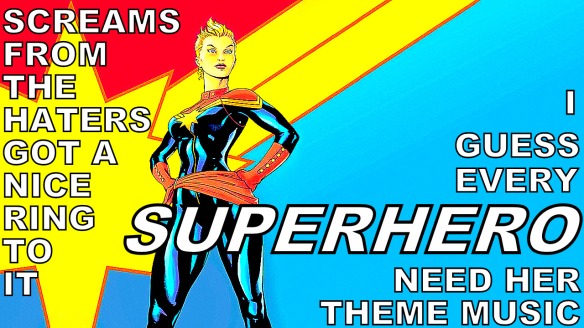 I’ve got a Kanye thing going. Deal with it.

14 thoughts on “On Geek Gatekeeping and Inheriting The Earth”