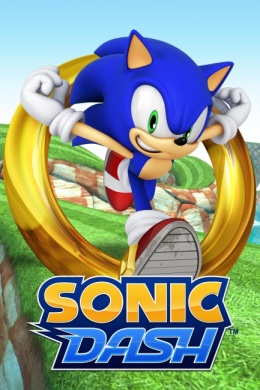 And the iPhone game saga continues.

Sonic Dash is a free iPhone game that is very similar to Sonic Adventure 2 Battle (if you’re playing as Sonic or Shadow), but you have a touch screen instead of controller. All you do is run through the course collecting rings and killing bad guys without dying. You can play as Sonic, Tails, Knuckles, or Amy.

There is extremely little I like about this game, but I will put forward that I might have set my expectations too high. I love Sonic the Hedgehog, and Sonic Adventure 2 Battle is one of my favorite games of all time. So when I say I had high expectations for this free game, I really did expect a lot from it.

But this game is a horror scene. Whoever thought that making everything the same bright colors is a moron. You can’t see some of the obstacles, and making some of the objects you go over and some you go under look the exact same makes the game play confusing. Additionally, the game consistently puts obstacles in awkward spots so you don’t actually see some of them before you need to avoid them.

The game does not respond quickly to one’s touch, so if you want to avoid something at the last second it will not work. I also don’t like that tilting the phone doesn’t do anything (unlike Temple Run 2) and that you have to use your finger to do everything; it’s really annoying.

The most irksome thing for me is how much the “free” game relies on money. Unlike Temple Run 2, in order to advance in Sonic Dash you do need to spend real money. I don’t mind if people spend money on a game if they want to, but if you are going to have a free game don’t make buying things once you’re in it necessary.

In case you couldn’t tell I’m not recommending this game to anyone. It’s a wonder I haven’t deleted it from my phone already.