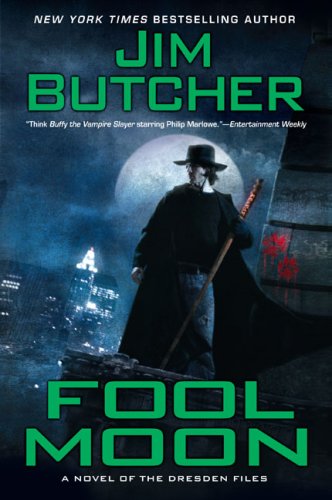 And it’s the Dresden Files again, everyone. You are going to get inundated with these, so in the words of Scar from The Lion King, “Be prepared!”

The second book has Harry Dresden following another series of murders, this time done by werewolves (I’m not spoiling because it’s pointed out on page two). Maybe it’s because I read the first book of the series immediately followed by the second one, but the beginning was ridiculously repetitive. There were entire paragraphs describing characters in the second book that were the same as paragraphs in the first word for word. Additionally the events of the first book were frequently recapped. I found it really irksome, but if you had taken a couple days/weeks/months/years in between books it might not have seemed so repetitive.

So, werewolves. To be honest, I’m rather ambivalent about them. The only time I can actually remember being freaked out/excited/moved in some way, shape or form was a two part Goosebumps episode that ended in the werewolf suits getting buried in the ground so that the people couldn’t use them anymore. That was about fifteen years ago (you have no idea how horrifying that was to type). Other than that, I haven’t been a really big fan or sought out werewolf things.

This book gave them a slightly different spin by making different kinds of werewolves. It made it different for me, but it also got confusing toward the end when I had no idea which types of werewolves were on whose side and everyone was going crazy.

I think Butcher, the author, does a terrible job with female characters. You have the cop, Murphy, and you have the sexy reporter, Susan Rodriguez. While both are rather well established characters at this point, they are so cliché. Susan Rodriguez in particular is practically Rita Skeeter, and it drives me nuts. Hopefully some twist is thrown into either female character’s story because at this point the writing of both drives me crazy.

Overall it’s a good book. If you watch too many cop shows on TV (like me) you might be able to guess the ending, but it’s still worth your time!