So I enjoy clicking on random links on a manga site’s home page. Sometimes it goes awesomely, sometimes it goes horrendously. Tale of Nezha is in the middle of the two extremes.

One positive: the art is absolutely gorgeous. And it is all in color. I find it mind-blowingly beautiful. The second positive is the story. Tale of Nezha is a Chinese manga based on a Chinese Buddhist myth about a magical young boy named Nezha who sacrifices himself so that ritual human sacrifices made to a dragon deity could be returned to their homes. He then appears to his mother in a dream and tells her to build a temple in his honor. But when Nezha’s father discovers the temple, he burns it down. That incites Nezha’s wrath and he tries to kill his father.

I really wish I could figure out the story from the manga itself and not Wikipedia. Because it sounds like a fascinating story. But the color pages are a negative point here because you can’t tell what is being said. 80+ pages of manga and I had absolutely no idea what was going on. And I still have no idea what that first chapter was about.

This series reads left to right, as opposed to right to left like everything else. It took me a while for me to figure that out, which probably didn’t help my comprehension of the series.

Tale of Nezha is right up the alley of (probably) most of the people who read this blog. If you feel inclined, go check it out. But watch your translator. 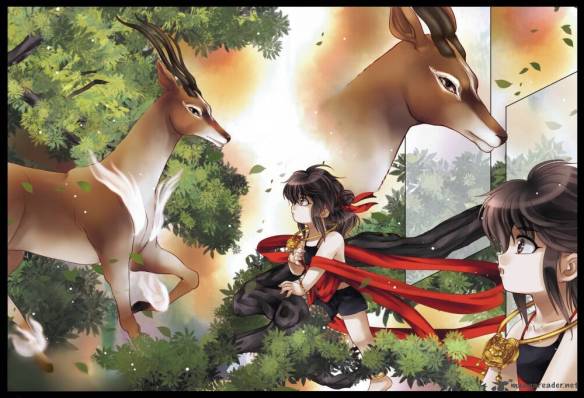