Yeah, so, this movie came out two weeks ago. I… don’t have an excuse—I guess I was just so underwhelmed by it that I didn’t feel like writing about it. I mean, why bother when io9’s “Star Trek Into Darkness Spoiler FAQ” is a thing that exists? 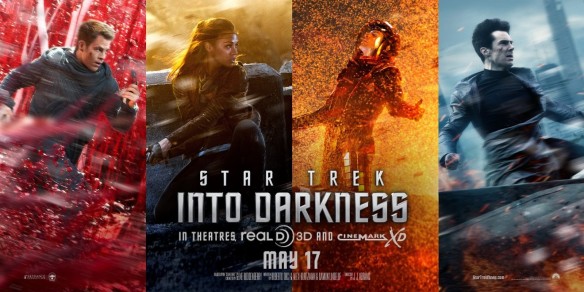 But it’s poor form to avoid writing about a movie so ripe for feminist critique. Let’s do this thing. Spoilers after the jump.

Let’s get this straight. This was a good movie, but it wasn’t a good Star Trek movie, and it certainly wasn’t a feminist movie. If you’re looking for a actiony romp with the plot comprehensibility of Battleship (and a similar number of explosions) and a bunch of hot actors, then this is the summer popcorn flick for you. If you’re looking for anything else… I’d take your cash elsewhere. I heard Epic was good. 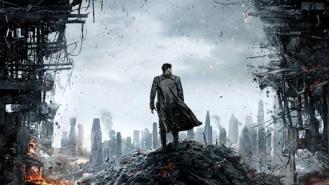 First, the plot. The plot was a hot mess. At least a half hour of the movie could have been cut without affecting the story, and that’s a generous underestimate. Things happened because they needed to happen and not because they really made a ton of sense, and the twists were so obvious I don’t know if they can even be counted as twists. Bandysnarp Cumberbeans was, in fact, Khan, and plot stuff often happened for the sole purpose of being a parallel to the original Wrath of Khan storyline. (I was actually embarrassed when Spock did the notorious “KHAAAAAAAAAAAN” yell at the end despite the sadness of the scene preceding it.)

Let’s talk about the characters and their interactions, though, because they were what made the movie redeemable. I thought that, for the most part, the bridge crew was great and that their relationships progressed in believable ways. I particularly loved the three-way conversation between Kirk, Uhura, and Spock in the shuttle, and Kirk/Spock fans (a group with which I identify) will be highly satisfied with the amount of shippy material the movie provides. Sulu was also fantabulous, and I hope he finally gets a captaincy in the next one. The scene where he holds the bridge was one of my favorite parts of the film. My biggest beef, though, (besides Khan, which I’ll get to in a second) is with one Captain James T. Kirk.

Mr. Abrams. J.J. Buddy. Pal. Chum. Have you actually fucking watched a single episode of The Original Series? Have your writers? Because your Kirk is barely a smidge like the Kirk I came to love in TOS. He’s based on the cultural stereotype of Kirk as the guy who gets all the alien girls rather than the actual character. You, for some reason, need to constantly show him getting said booty like we’re not all aware of the stereotype; he flirts with anyone in a skirt, he has a threesome with alien catgirls and, in the most horrifically egregious scene I’ve ever seen outside anime, peeks over his shoulder at an underwear-clad Carol Marcus while she’s changing.

Here is a picture of her with clothes instead.

And then there’s the elephant in the room: Khan. I held out hope till the very last last second that J.J. Abrams had not actually whitewashed one of the most well-known PoC parts in science fiction, but alas. Cumpernickle played a good Khan, for what it’s worth—intense, super-smart, and super-strong—but do I believe he was the best for the role over literally any Desi actor? Not for a hot second. And as an aside, I was depressed as fuck that Noel Clarke (aka Doctor Who‘s Mickey Smith) didn’t have a larger part. 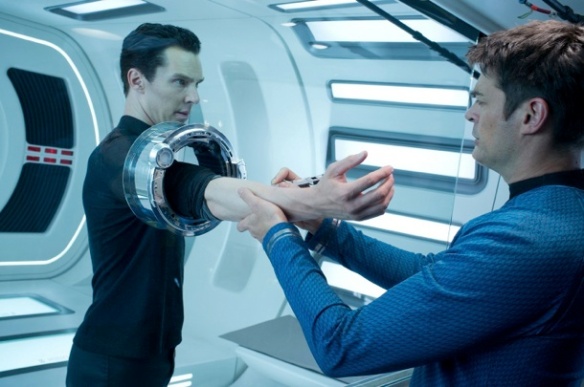 I think overall this film’s biggest problem is that it fails as an Alternate Universe fanfic. J.J. and his writers need to head on down to AO3 and see how it’s done, because a successful A.U. considers the characters you started with, considers how changed events would have changed said characters, and if it’s going to rehash plotlines from canon, does so in an interesting and thoughtful way, rather than shoehorning characters in because of their name value. I’m worried that the next movie will be about saving the whales since, after Khan, that’s the only thing the public at large remembers about the TOS movies.

I saw the first Star Trek reboot film ten times in theaters. I likely won’t watch this again till it’s out on video, and then some. I guess it would make a good drinking game? Drink when there’s a plot hole, drink when bad characterization, drink when whitewashing… strike that. That sounds like a good way to get yourself dead. My one small consolation is that J.J. Abrams will be so busy fucking up the Star Wars franchise that he probably won’t be involved in any sequels to this film.

6 thoughts on “The Late, Not-So-Great Star Trek Into Darkness Review”