So, being the epic procrastinator that I am, it has taken me eight months to get around to playing Pokémon: Black and Blue, People for the Ethical Treatment of Animals’s parody of Pokemon Black and White. The game turns the Pokémon games on their head by having Pokemon battle against trainers for their freedom. The premise, in long form, is as follows:

Designed, apparently, to call attention the negative messages that our children are learning from the Pokémon games, the game’s heavy-handed approach leaves the whole thing feeling like a publicity stunt (which it obviously is), though not nearly as ugly as some of their other public relations material.

You see, PETA’s advertisements, publicity, and what have you often trade in racism, sexism, misogyny, and the commodification of the female body to make their points. They seem to be fond of comparing women to pieces of meat, as they did here, and again here. In a fit of sensitivity and tact, they’ve even been so bold as to dress up as Klan members in front of the Westminster dog show in 2009 in New York.

However, what PETA lacks in subtlety and diplomacy they make up for in straightforwardness. So, in Pokémon: Black & Blue, the player is consistently and aggressively presented with the message of animal cruelty, and PETA’s rather self-aggrandizing place in the fight against it. This “motif” extends to all aspects of the game. For example, the Pokémon, who are rebelling against their trainers to further their own self-determination and dignity, all reflect some form of animal abuse in their appearance. Oshawott, the otter Pokémon, has been shaved of most of his fur. Pikachu’s ear has been snipped and Snivy, the lizard, has some sort of chemical syringe sticking into his head. And it goes on. The scenery of the game, dotted with barbed-wire fences, what appear to be bloodsoaked trees, and animal traps only reinforce the notion that for the Pokémon, the world we see as a game is something of a hellscape. 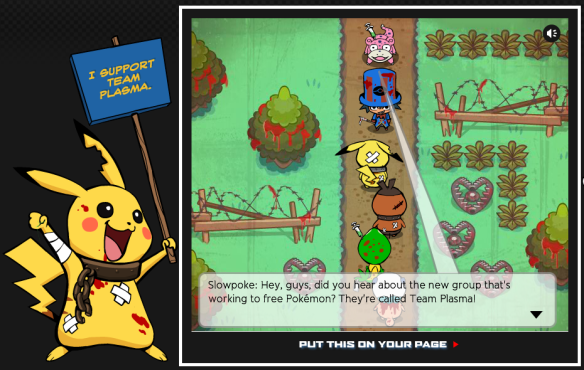 I would be remiss if I didn’t mention how PETA has included a shout-out to what they see as the methods by which they or their allies can stop this animal cruelty. It’s pointed out in the movesets of the Pokémon. Each of the four Pokémon that you can use has the standard moveset of four movies, just like in the regular games. However, in Black & Blue, only two of the moves are those you might recognize, such as Water Gun or Ember. The other two slots are filled with move titles like “Protest,” “Group Hug,” and “Educate.” Their movesets are displayed below in the trading cards which are downloadable in .pdf from the game website.

The Trainers, on the other hand, have move names that involve hooks, toxins, perfumes, bullying, and “discipline,” if the message were not already strong enough. Their canned, nefarious dialogue is simultaneously disturbing and groanworthy, and yet, for each of them a simple loss at the hands of an inexplicably Anglophone Pokémon is enough to shift their entire worldview. It boggles the mind how Ash Ketchum considers the possibility of going to “free ’em all.” when just moments before he just, well, take a look.

All told, this game is so didactic as to be called Brechtian. Put another way, it leaves one with the feeling of just having endured the creepiest of after school specials. Constantly being beaten about the head with the same message written over, and over, devoid of subtlety or appeal, is certainly what one would call alienating. Unfortunately, the game doesn’t succeed in making the player rethink the ethics of Pokémon so much as it lets the player know that PETA is quite willing to take anything and everything out of context.

This is not the first time PETA has chosen to parody a Nintendo game to make a point. In 2011, they lampooned the Super Mario franchise and its iconic Tanooki Suit by releasing another rather grotesque game in which the Tanooki is the protagonist and chases after Mario to retrieve its skin. It’s called Super Tanooki Skin 2D and you can “enjoy” it here. Nintendo has taken the two games a little seriously.