Final Fantasy VII features a character named Barret Wallace, seen above, who I’ve mentioned in previous posts as being the leader of a terrorist organization called AVALANCHE on a mission to save the Planet. I can’t say that I agree will everything AVALANCHE does and all of Barret’s viewpoints. I’ve mentioned before that I think some of the things Barret has done make him a complete asshole, and the same goes for all the other AVALANCHE members.

I do, however, find Barret a very complex character with a lot of agency. He used to work as a miner in a town called Corel. However, the Shinra Electric Company burned Corel to the ground, supposedly killed Barret’s best friend Dyne, and in the process of all this, Barret’s right hand was shot off. Following these events, Barret grew a great distrust for the Shinra Company and correctly proclaimed it evil. He adopted Dyne’s young daughter Marlene as his own, had a gun attached to the stump where his arm used to be, and eventually found himself the leader of AVALANCHE and at odds with Shinra due to their different ideals.

“Barret” is a Japanese transliteration of the word “bullet”. Before the release of the game in English, Barret was actually called Bullet in some of the magazines. His name has also been spelled “Barrett” on occasion as well.

Barret is very notable. He is actually the first playable black character in the Final Fantasy franchise. Reception to him, however, has been rather mixed.

Some people have hailed Barret’s character; others have called him a racist representation. Barret may be a recreation of Mr. T. Granted, I don’t know a lot about Mr. T, so I cannot say whether or not I think Barret is racist based on that. Furthermore, Barret’s character was redesigned in Advent Children to break away from any Mr. T comparisons, which tells me that the parallel might have been an accident in the first place.

While doing my research for this post, I found one person who gave an argument that should be noted. The argument is that Barret’s character is racist because he starts as the leader of AVALANCHE, only for his position to be taken away and given to the more-or-less Caucasian character Cloud. The argument further states that this was done to further a “racist agenda”. While I will agree that the role change in the story can be problematic, I have to disagree that it was done to further a “racist agenda.” I’m going to argue that any kind of racism in this game is accidental. That doesn’t excuse it, but it also doesn’t make it an agenda.

Very few writers nowadays—or even back in 1997—decide to create POC characters just for the sake of cutting those characters down. On top of that, Barret has a lot of agency, as I said before. Barret is clearly a character that designers and writers put a lot of time into.

That said, he does have some very stereotyped qualities, from the way he looks to choice of words. His physicality and diction might be a direct parallel to Mr. T for all I know, but I’m not going to excuse that. He is still the “big tough black guy” who’s so badass he’s got a gun on his arm, has shaved the sides of his head, and curses so much that a good portion of his dialogue has to be censored. He also has tattoos. That may not seem like a big deal; after all, a lot of people have tattoos, and I wouldn’t even bring this up if he hadn’t been created by a Japanese company. You see, Japan doesn’t have a very good track record when it comes to portraying POCs to begin with, but for anyone who doesn’t know, the Japanese generally associate tattoos with the yakuza, their mafia. And Barret’s profession is also one of terrorism on top of that. Barret is essentially a character whose presence is designed to be intimidating and scary.

Additionally, Barret is the leader of AVALANCHE at the start of the game, and despite the fact that he is able to organize the destruction of two Mako reactors, he is constantly shown as incompetent and hotheaded. He eventually gives over his leadership position to Cloud, and even when Cloud ends up in a coma, leadership does not fall back to Barret. First it goes to Tifa. Then, when she leaves the party, it goes to Cid. Barret also doesn’t make much of an appearance in the sequel either, which focuses more on the characters Cloud and Tifa

All that said, Barret still has a lot of good traits. Particularly, his relationship with Marlene and how she motivates him is of note. Marlene is, as I’ve said, the daughter of Barret’s best friend, whom he adopted. Barret became a terrorist against Shinra for Marlene after the destruction of their hometown at Shinra’s hands, because he wants her to live in a better world. At the same time, he’s torn between the fact that he doesn’t want to leave her alone and actually going out there and making the world a better place. Yes, he may be the big stereotyped “tough guy”, but he does have a backstory that shows a believable progression of how he became that way. 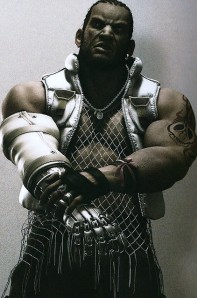 He does, however, wear dog tags despite never being military.

Unfortunately, quite possibly due to the criticism Barret received, he was the last black character in the Final Fantasy franchise until FFXIII came out in 2009 and introduced Sazh.

Games and media do feel pressured to have nonwhite characters, but when they include them, they are then accused of being racially insensitive. This is usually because there is at least some racially insensitive material. After all, there is a fine line between showing a character that avoids enough stereotypes to be unrelatable to the people they look like and presenting a character with so many stereotypes as to be offensive. I doubt any POC character is going to please everyone. Unfortunately, because companies are so afraid of being accused of racism, they tend to leave out characters of color all together. VII came out in 1997, and XIII came out in 2009. It took the company twelve years before they tried to have another POC. And in the sequel to XIII, Sazh is all but nonexistent. Nomura, one of the game directors, wanted to use him as the XIII representative in the sequel to Dissidia Final Fantasy, but Lightning, another more-or-less Caucasian character, was chosen instead.

Personally, I really like Sazh, so I’m not too happy about that development. And despite all the negative criticisms about Barret that both myself and other people have given, I really like him too. He is a character in whom I can easily get invested during the game, so I’m more or less happy with him overall. However, neither am I going to deny that there are a lot of frustrating, problematic elements to him.