From where I’m sitting, yesterday was a pretty good day. You might have been up all night with us watching the live feed from the Texas Senate house on SB5. “Emotional roller coaster” is probably a good way to describe that experience. If you slept in that morning, like I did, then you woke up to hear that Section 3 of the Defense of Marriage Act had been ruled unconstitutional. I’m not sure that this is exactly what victory looks like, but it’s certainly a step forward.

And with that in mind, I’d like to shout out some of the more compelling explorations of gay characters in comic books. Technically this is a Representation Roll Call, but it’s going to be slightly different format-wise. Since we’re on the subject of marriage, I’ll start with the wedding of Kyle Jinadu and Jean-Paul Baubier, whom you probably know as Northstar.

Northstar was revealed to be gay all the way back in 1992, but it would be another twenty years of publication before his wedding would see print. Astonishing X-Men #51, released on 20 June 2012, marked Marvel’s first gay wedding, though not the first gay wedding in comics. The Baubier-Jinadu wedding came about a year after the State of New York legalized gay marriage, and was meant to explore that piece of news and make it relevant to the life of a popular Marvel superhero. It’s easy to forget, being caught up in all the action and intrigue, that implicit in the struggles of the X-Men is the fact that people from all walks of life face bigotry, and the fear and hatred that comes with misunderstanding. Northstar’s wedding is a good reminder, and it’s worth a note that their relationship traces the difficulties of a union that brings together people from entirely different worlds, as Kyle has no superpowers. That’s best explored in Nation X Vol 1 #2, by the way.

That’s the most visible example in recent memory, and probably the most positive one. The cover of Astonishing X-Men #51 (at the head of this post) is evidence enough of the wide support that the happy couple experience in their own universe. On the other hand, other explorations have often been either stupid or insulting, and I’m still not sure which. 2003 saw Supergirl Vol. 4 #79, with an alternate Earth-One timeline in which there exists a pink Kryptonite. As you may have already guessed, this Kryptonite gives Superman gay tendencies. Lois Lane can’t seem to figure out what’s “wrong with him,” while he compliments a very confused Jimmy Olsen on his bowtie and window treatments. While the whole thing is meant to be a spoof, it is just so utterly groanworthy that its potential as parody or satire is drowned out by the sound of thousands of palms meeting faces. 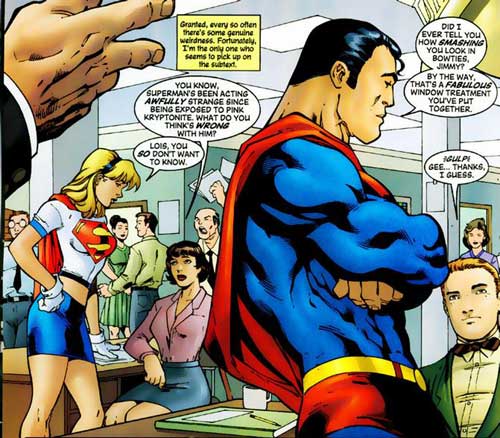 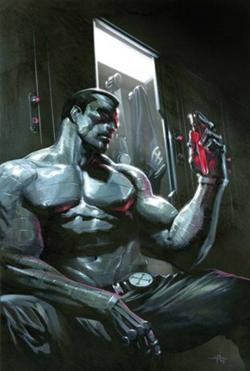 Moving from the ridiculous to the more sober, let’s talk about one of my favorite superheroes: Piotr Rasputin, or Colossus. While his character in the Marvel 616 universe is pretty cool, worthy of a nod and a thumbs-up, Ultimate Colossus is more compelling by a power of ten. Earth 1610 Piotr is openly gay, and incredibly strong, but what makes him of interest is how he comes by his super strength. As a youth, he discovers both his homosexuality and his sole natural superpower: the ability to turn his skin to steel. He also learned that he lacked the strength to move his own body properly while in his metal form. Feeling both the disgust of a father who was ashamed to find out that Piotr was gay, and impotent in his own powers, Colossus turns to a mutant performance-enhancing drug called Banshee, which leaves him forever enhanced. While he goes on to a predictable career of hitting things really hard, picking up heavy things and tossing them around (like a nuclear submarine or a Sentinel) and withstanding nuclear blasts, there’s a linking of his feelings of inadequacy over his limited powers with the shame that his father gives him.

I’d like to take this opportunity to mention something more serious. In our world, when young people are made to feel shame over their homosexuality, the drugs they turn to don’t leave them with super strength. They are left addicted, exploited and often homeless; LGBT youth make up roughly forty percent of homeless youth. The shame and abuse that they feel drives them into the streets, where they are at disproportionately high risk to be the victims of violence, sexual and otherwise.

So, while yesterday’s events are cause for celebration if you are a supporter of LGBT rights, there are six hundred and forty thousand American tragedies by way of homeless gay teens in this country. And while the homelessness of any person, and that much more so for a child, is an unacceptable tragedy, the fact that around four in ten homeless LGBT teens claim that they left their homes because they were forced out by intolerant family members is more harrowing still.

So, when you’re next reading about Northstar, or Ultimate Colossus, or even Rictor, Phyla-Vell, Moondragon, Wiccan, or Karma, I hope that you’ll remember what the cost of homophobic discrimination and intolerance are. I’m not quite done here, though. Come back tomorrow for Part Dos, where we’ll talk about Kate Kane and other lesbian superheroes. Until then, congratulations on a world one step closer to equality.