Don’t let be said that I’m not a woman of my word: a couple days ago I finally sat down and watched Equestria Girls with my brother. (If you don’t remember, I made the damning promise in this post right here.) I appreciate the fact that I got to watch it with him because unlike myself, he’s an actual fan of the shows and would be able to pick out the inconsistencies between this ‘movie-verse’ and the universe created by the show. Unfortunately, even with his

help I don’t think that the phrase I uttered the most during the film changed all that much from if I had been forced to watch it alone. (That phrase being “this is the dumbest shit.”) Not even ‘dumb’ in terms of Equestria Girls being a film made for an audience that is obviously not in my age bracket, but dumb in all the trite ways one would expect from a piece of media designed solely around marketing. This is not to say that it was all terrible, mind you, and some of my assumptions from the earlier post were certainly proven wrong. So let’s dive right into the plot and find where this movie went from enjoyable kid’s movie to jumping the shark.

Twilight and her friends travel to Celestia’s castle so that she may receive some lessons on being royalty from the other three princesses. During the night however, Twilight’s crown containing the element of magic is stolen by a mysterious pony. With their combined chasing skills, the six younger ponies catch the thief but only momentarily as both the crown and the mysterious pony fall through a magical mirror. In the aftermath, Celestia reveals that the pony was no other than the pupil she had before Twilight, Sunset Shimmer, whose impatience and mean nature led her to leave Celestia’s teachings and follow her own path (presumably the path of ‘evil’). Also, the mirror which the crown and Sunset fell through is actually a portal to another world. Twilight must chase after Sunset before she wreaks havoc on this unknown universe with the element of magic.

With this admittedly good plot, Twilight heads into the other world only to be shocked by her transformation into a human. Hilarity ensues as she tries to figure out how to utilize her new body, but she gets control over it in about five seconds, so it must not have been too difficult. With her motor skills regained, Twilight ventures into the unknown world of Equestria High where Sunset is the queen bee of the school. The extremely bitchy queen bee rules over the other students with fear because the audience needs to hate her. Twilight quickly makes friends with all the human counterparts of her pony friends, but eerily similar to the problems caused by Dischord’s meddling in Equestria in the television show, they all seem to hate each other. To add to her problems, it seems the crown is found to be in Principal Celestia’s possession and the only way to win it back is to become princess of the fall formal (isn’t that what you’d do with a mysterious and expensive looking item?).

With this set-up, the rest of the movie can pretty much go into cruise control. Twilight must restore the friendship between the human counterparts of her friends (which she does), she must bring the school together to win the crown (which she does), and she has to overcome the bullying and trickery from Sunset, who quickly finds out who she is and who also wants to keep the crown for herself (which she also does). Twilight then returns to Equestria, now suddenly more comfortable with being a princess, the implication being that it’s easier to be a horse princess than a regular human girl.

To what may be your surprise, readers, I did not hate this movie. Honestly, I didn’t, but the extent to which it fell into every single trope of school-centric shows and movies directed towards young girls was severely disheartening. I think the most damning thing I could say is that it was extremely obvious that Lauren Faust had no input in this film whatsoever. No. I lied. Let me get to the more damning things right now.

First of all, this film’s major issue is that there are no conflicts. The main conflict of getting the crown back is decent, but we pretty much already know that Twilight is going to get the crown back because there’s another season of the show and it would be hard to market it without one of the most beloved characters. I’m talking about the secondary conflicts. Something I liked about this film was that Twilight never stopped acting like a horse (using her mouth to carry things, not understanding human technology, etc.), but the issue is she never had to suffer repercussions from it. The one scene where she does is when Sunset’s lackeys film Twilight acting strangely, then cut it and put it up on YouTube as slander. Though she does get laughed at for a little bit, everyone forgets about it in the next scene and Twilight basically shrugs it off as “wow that was embarrassing.” And then everything is back to normal. It didn’t have an impact on anything at all.

Another example is in Sunset’s second attempts at getting Twilight out of the running for fall formal princess. Sunset presents Vice Principal Luna with photos of Twilight ruining the decorations for the dance. Just as Twilight is about to be expelled, Flash Sentry (bland love interest extraordinaire) comes in with evidence that the images were doctored to incriminate Twilight. This entire series of events takes about a minute in film time, again rendering any tension it may have created useless.

Even the romantic subplot is the same way. After Flash invites Twilight to the formal as his date and she turns him down, nothing is different. Neither of them are affected by it and it’s forgotten about until the end. What I’m trying to get at here is just because it’s a film for a younger audience doesn’t mean that said audience is so unintelligent that they can’t keep track of more than one conflict at a time. It feels like the writers were just going through a checklist and marking each plot point as finished as quickly as they could so they could fit in as many as they could.

Are you shitting me?

The biggest problem I had with the movie was how it ended. As expected, Sunset and Twilight have a showdown, and Sunset does actually end up getting the crown and using it. However (and this is a big however) using the crown turns Sunset into a freaking demon. A real life demon. Then she basically turns all the students into zombies and tells Twilight that her plan all along was returning to Equestria with this ‘army’ to take it over. Thus, Twilight is left to combat this stupidity the only way she can: with even more stupidity. With her magic inexplicably working again, Twilight transforms herself and her friends into anthropomorphic pony magical girls. I am not joking. It’s like the battle in Sailor Moon between Queen Beryl and Usagi, except the other ‘scouts’ are alive. With their combined powers, the blast Sunset with a ‘friendship’ beam and destroy her. Well, perhaps that terminology is a little dramatic, Sunset is still alive, but… there’s something weird about her.

Sunset begins crying about how she doesn’t know how to make friends—to which Twilight insists that the pony counterparts can teach her—but there’s no reason that I can see for her complete 180. Following her character trope, she should either be happy that the girls taught her about friendship or pissed that she lost, not crying over being lost and misguided. What exactly did Twilight do to her with her friendship beam? 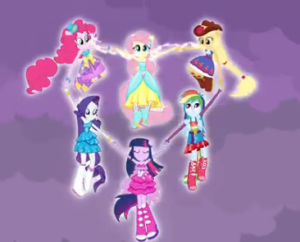 Are you SHITTING me?

It may be reading too much into crappy writing, but the first thing my brother said after watching that scene was “was Sunset just mind-raped?” Previously discussed in this article, mind rape is when a character’s inner thoughts are so meddled with that they don’t know who they are anymore. Though this is a kid’s film, this does seem to be a viable option for what happened. Sunset is simply destroyed, both physically and mentally, after being defeated by the pony Sailor Scouts and it makes Twilight’s victory over her much less sweet.

Though that was my biggest problem, there’s also the completely useless romance between Twilight and Flash (who is also Sunset’s ex-boyfriend). Flash is really just there as a prop who saves Twilight from her mistakes. Their relationship also gives us the great line right before the dance where Twilight tells Flash that just because she told him that she wouldn’t be his date to the formal it didn’t mean that she actually meant it. Just what we need, more shows telling their audience that just because someone says no, it doesn’t necessarily mean no. Whoever wrote that should be ashamed.

Despite my dislike for a lot of the main plot points—especially with Sunset being a literal embodiment of evil—I mostly found myself laughing at how ridiculous the whole thing was. I think my one friend put it best when she said, “it’s like I can feel Lauren Faust’s sigh with every second.” Indeed, none of the charm that made the original series so endearing in present. In its place are callbacks to traditional gender roles and a lack of finesse over dealing with the feelings of young girls. I would be adverse to take a younger girl to see this movie. On the other hand, I would recommend it to fans of My Little Pony just so they can appreciate what they already have: an exemplary show for young girls that focuses on companionship rather than arguing amongst girls, and inner strengths and skills over beauty and outward appearances.

1 thought on “All Fear the Horsewomen of the Apocalypse: An ‘Equestria Girls’ Review”