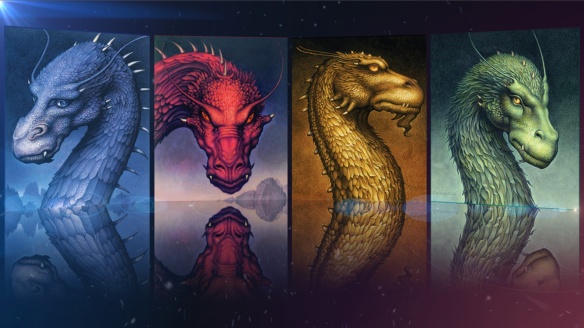 It’s been a while since I’ve talked about the abomination that is this series, so let’s talk about it again. When it comes to Eragon, I sometimes don’t even know where to begin. Christopher Paolini’s books are shit, and Eragon himself is so obviously a self-insertion, that I’m not sure if the author was ever able to separate himself from the character.

Unfortunately, because Eragon is a self-insert for Paolini, his character is given a lot of leeway and is handed rewards for almost no reason except that the author thinks he deserves them. Nowhere is this more apparent than near the end of the second book, Eldest, when Eragon is magically healed from a restricting handicap.

At the end of the first book, Eragon, Eragon suffers a grievous back wound from a swordfight. This injury continues to plague him for nearly the whole second book. Due to the position of his scar, he sometimes has difficulty moving around properly, and it causes him massive amounts of pain, to the point of passing out. All seems lost, because he is “the only hope” the world has of ever defeating Galbatorix.

Eldest, to put it mildly, was really boring, mainly because nothing happens in it. Or at least, none of the passages involving Eragon have anything of note. Additionally, the book doesn’t show many of the things it should have shown—like what was happening with Murtagh’s character. Instead, we’re treated to scenes of Eragon getting exposition bombed at, and then he goes to an elfish party. So in many ways, Eragon’s disability becomes a saving grace. It was the only interesting thing going on with the main character. His enemy, Galbatorix, is very powerful, and we knew the books wouldn’t end until Eragon completed his hero’s journey and killed him. So how then, would Eragon, who even before becoming disabled was too weak to save the day, ever hope to defeat such a powerful foe with such a physical handicap?

He gets magically cured. And then he’s transformed into an elf-human hybrid thing, so Eragon is now more powerful than he was previously.

This is seriously what happens. Not even a little bit of an exaggeration. It’s a cheap copout, and it has an extremely reprehensible message.

First of all, people with disabilities are very rarely represented in a positive light. Though I would hesitate to call Eragon a positive role model, the books themselves at least seem to think of him as such. By giving Eragon a disability, the books began to engage in a discussion about what disabled people can and cannot do, regardless of whether or not the author intended for that to happen. It was interesting and positive, because very rarely do we ever get a main character who has to overcome something more clichéd than, say, claustrophobia, if only because disabilities are often used as writing shorthands—they exist for the characters to overcome, instead of being traits that help define the characters. As a disabled character, Eragon’s struggles would have been all the harder, and therefore it would have been all the more rewarding when he finally triumphed at the end.

However, due to the ceremony that magically heals him and makes him “better” than everyone else—to everyone’s astonishment, because “such a thing has never before occurred in the history of the Riders…” (Eldest, pg. 535)—all the potentially positive messages are replaced with negative ones. This says that disabled people cannot be heroes. Throughout the book, up until this point, we are constantly worried over how Eragon’s going to save the day. Eragon himself is met with derision and scorn because some people have now lost hope. Then, everyone is proven wrong, and Eragon even goes so far as to accidentally break one of his previous hater’s arms while sparring with him, and the man in question doesn’t get angry. Instead, he says:

Eragon’s reaction to his own transformation is also less appreciative and more along the lines of self-assured justice. He thinks:

The second terrible message this sends is that disabled people are just not special enough to be fixed. There is no reason why Eragon should be the world’s last hope. Brom, a previous dragon Rider whose dragon died, has done a lot more damage to Galbatorix than Eragon ever did, and he did it without a dragon or super-powerful spells. Oromis and his dragon are also still alive, and even though they are both disabled themselves—Oromis has seizures and Glaedr is missing a leg—they are still more powerful than Eragon. Despite this fact, and despite the fact that both Oromis and Glaedr have been attending this exact same magical ceremony every year for the better part of the past century, Eragon is still seen as the last hope and Eragon is still the only one cured.

Out of all the terrible ideas that went into these books, this is probably the worst one because of how harmful it is. Because Eragon receives a magical cure that he did nothing to earn, having the disability beforehand becomes a pointless waste of time, instead of becoming the potentially interesting plot point that it should and could have been.

15 thoughts on “In Brightest Day: Eragon”