On the outside, Dangan Ronpa is a game about kids murdering each other under various circumstances. However, should you choose to look a little closer, the game contains a slew of important issues that the fandom has more than picked up on and discussed. From exalting Sakura’s femininity, which is expressed in a physique that lies outside of the stereotypical female body shape, to Fukawa’s neurosis, caused by many layers of abuse, the game offers up snippets of deep characterization. Unfortunately, since at the end of the day it is a game about kids murdering each other, there’s not a lot of time to go over every important issue. One specific topic that’s overlooked almost entirely is the representation of one Chihiro Fujisaki’s gender.

In the second trial, we discover that Chihiro, the delicate programmer murdered by a blunt object to the head, has actually been a biological male the entire time. Chihiro felt the need to hide themself under the guise of a female because of how weak they felt he was and the image of manliness put forth by society that they felt they could never live up to. The societal conflict they wanted to hide from ultimately became the same conflict that ended up getting them killed. But what if Chihiro’s actions were caused by something more than feelings of inadequacy? dabblingDilettante’s short one-shot Lying is such a Weakness explores Chihiro not as a young man hiding behind female clothing, but as a genderqueer preteen trying to understand themselves and ultimately finding a strength through their dismissal of the rigidity of either sex.

It’s not a triumphant story, not by a long shot, and the moments of strength, while monumental, are still small and on a very personal level. This is not a shortcoming by any stretch of the imagination. In an unaccepting household and a society driven on the stereotypical gender roles (though this takes place in Japan, it would be a folly to say that any other culture would be much more accepting), victories must sometimes be found in the ways you can avoid cutting your hair for months, or in discreetly ordering clothes that might be considered abnormal, but make you feel comfortable in your own skin. It’s small, and sometimes bittersweet, but it’s still a victory.

Chihiro’s self-loathing in the face of their own one-person revolution also gives a sense of realism I think. Of course having an uplifting story about how someone really stuck it to the gender police is great, but that’s not everyone’s story. Having someone struggle through their journey, and even be conflicted about the end result, is not necessarily more realistic than the former, but this type of catharsis is important as well. There are two sides to every coin, as they say, so to explore the more negative side is something I can appreciate (as well as it falling in character, which I can appreciate even more).

Though Chihiro is canonically a cisgendered male, I think fandom interpretations of their 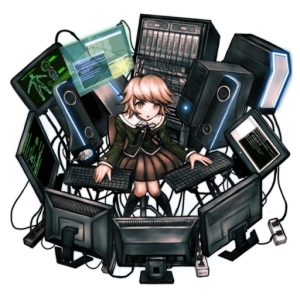 gender are fantastic and should be encouraged. Too often are characters outside of the gender binary swept under the carpet, left to gather dust or just left out entirely. To have a character that could possibly take up this slack in canon is fantastic and can (and has) lead to many great discussions about how these characters can be interpreted and how they should be represented in fanworks and possibly other canonworks.

As to be expected, there’s a certain subset of the fandom that’s pretty not-okay with this interpretation of Chihiro’s character, but honestly I can’t understand where they’re coming from. Who is it hurting? No one, and if we can celebrate every lesbian and gay pairing under the sun, there’s no reason why we shouldn’t be celebrating a non-binary character as well. Despite the “word of God”, Chihiro has come to stand for so much more than a comment on societal emasculation. Chihiro means something to Dangan Ronpa’s trans and genderqueer audience, and that shouldn’t be ignored just because some people are uncomfortable with that. So please, take a look at this one-shot; it won’t take up much of your time—it’s less than a thousand words—and it might add insight into a character and help you understand a very real social struggle that’s happening with many children and adults alike.

1 thought on “Fanfiction Fridays: Lying is such a Weakness”