So there’s this musical I’m currently obsessed with, and it goes by the name of Notre Dame de Paris. This musical, based on the Victor Hugo novel of the same name, opened in Paris in 1998 and took France by storm–quite a surprise for a country in which musical theatre is not a popular medium. Though the story is better known to English-speaking audiences as The Hunchback of Notre Dame, the title actually translates to “Our Lady of Paris” and can be interpreted with a double meaning. It refers to the famous cathedral of the same name which is dedicated to the Blessed Mother and is the setting of the novel, and it can also refer to the character of Esmeralda, who exists at the center of the story.

The reason I say Esmeralda “exists at the center of the story” rather than calling her the central character of the story is because she is more of an object than a character. As the title implies, she is important to the story because the men around her feel possessive of her (“Our Lady of Paris”) and though she does have some amount of agency in the musical, most of her time on stage consists of things happening to her, rather than her making things happen.

[Warning: Spoilers for a nearly 200 year-old story ahead] 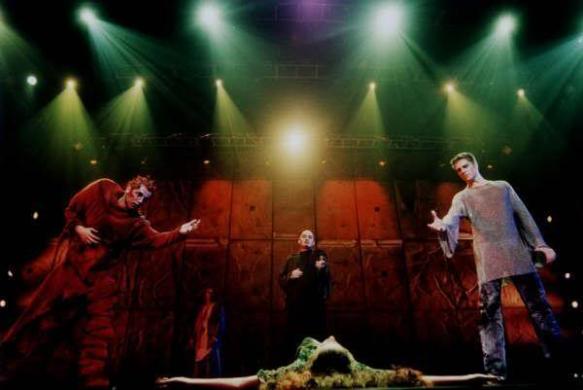 Almost every male character in the show has a hand in controlling Esmeralda’s life, but it’s undoubtedly the influence of two in particular which affects her the most.

When Esmeralda enters the show, she is traveling with a band of gypsies into France. She is immediately pursued by Phoebus, Paris’s captain of the guard, who finds himself attracted to the beautiful stranger. Since the feeling is mutual, Esmeralda sings him her life story. Right off the bat, Esmeralda is introduced to us not as an independent character, but as a love interest, and she is the only main character whose primary song is delivered as dialogue, rather than monologue. While I think that actually works better dramatically, rather than having the characters stop the action to sing to the audience, it does seem to indicate that she exists for the men around her, rather than for herself.

Every male character has at least one solo which is performed to the audience and encapsulates either his philosophy or his role in the story. It seems to only be Esmeralda and Fleur-de-Lys, the only other female character in the show, who have to sing their main solos either to or about another character.

Though Phoebus is engaged to Fleur-de-Lys, he continues his pursuit of Esmeralda and sings of his desire to be the one to deflower her. Esmeralda’s infatuation with Phoebus grows over the course of the show and guides almost all of her decisions. For example, it is at a clandestine meeting with the Captain that she gets framed for attempted murder. This travesty leads to her death in the second act, death which is brought about by one of the other men seeking to own Esmeralda: the priest Frollo.

Frollo is the most conflicted character in the musical. He is one of the only characters to truly want two very different things: a life of devout religiosity and a love shared with Esmeralda. Because he can’t reconcile these two desires, he feels the need to control Esmeralda, to own her, and then finally, end her life when she rejects him. Frollo is responsible for most of what happens to Esmeralda in the show: it is by his orders that Phoebus and the guards chase her and the gypsies, causing the two to meet; he is the one who jealously stabs Phoebus and frames Esmeralda for it; and he sends Esmeralda to the gallows because he told her she could only be released if she would have sex with him. While Phoebus is certainly the more shallow of the two, (his interest in Esmeralda went about as far as the bedroom) Frollo is far more controlling and takes things to much further extremes in his attempts to force Esmeralda into submission.

Despite being ostensibly the title character, Esmeralda goes through almost no character development throughout the show. She starts off as a young girl who is ruled by her feelings for a man; that man and others control the events of her life; and she dies in anguish after finally realizing the object of her affection has no concern for her. One could possibly argue that she goes through a character change at the moment she realizes Phoebus doesn’t return her love, since she shows solidarity with her gypsy brethren in that moment and seems to consciously defy Phoebus in doing so. Unfortunately, she’s dead roughly five minutes later, so it’s hard to call that character development since it’s never explored.

To be fair, none of the characters in this show really go through any character development. With the exception of Fleur-de-Lys, they all end the show as pretty much the same people they were when they started. It’s poorly written in that respect and, never having read the book, I don’t know if the blame for that lies with the adaptation or the source. Still, the attention given to the male characters, who get to be autonomous subjects of the piece rather than passive objects, is noticeable and disappointing. I do love the music from this show, but it certainly has a problem with its treatment of the female characters.

2 thoughts on “Who is ‘Notre Dame de Paris’ and what makes her so special?”