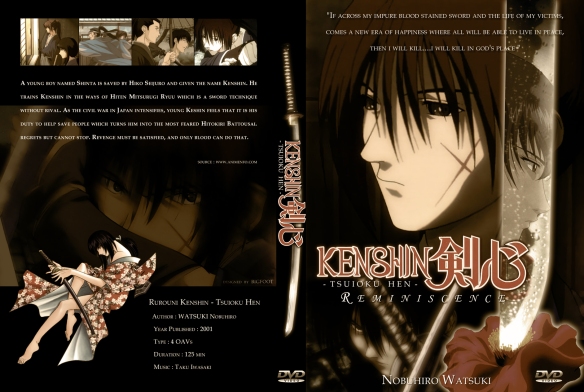 Lady Bacula has already talked about Rurouni Kenshin before here and we have a couple other posts on the subject as well. We really love us some Rurouni Kenshin on this blog. However, we seem to have neglected its prequel, Samurai X. I personally have never gotten very far in the original manga, and so Samurai X pretty much consists of all my Rurouni Kenshin knowledge. Watching the prequel before moving onto the actual series is what put me off to the original story. I had trouble reading Rurouni Kenshin and following along with all its quirky humor, because I was so used to Samurai X, which is completely joyless. The prequel is entertaining and really well made, but it is not a fun film. It is exceedingly serious, but that’s probably a good thing considering its subject matter.

Spoilers after the jump, in case there’s actually someone out there not familiar with the story.

Samurai X opens when bandits raid and slaughter a group of travelers. The only survivor is a young boy named Shinta, who is saved by a swordsman called Hiko Seijūrō. Hiko renames the boy Himura Kenshin and takes him on as a pupil. A few years later, Kenshin leaves Hiko’s tutorship to take part in the Meiji Restoration. The following events—his sham marriage to a woman named Tomoe and his time as the Hitokiri Battōsai, working as an assassin in the Imperialist cause—chronicle how he ends up with his iconic, cross-shaped scar and why he eventually decides never again to take another human’s life. 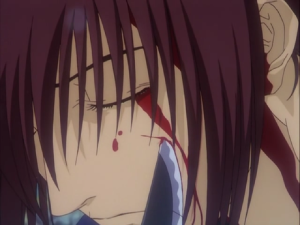 The movie deals with a lot of heavy subject matter, like PTSD and Kenshin’s internal conflict with being a mass murderer. Most of the plot, however, revolves around his romance with Tomoe, who is actually part of a ruse to kill Kenshin. She wants to avenge someone he assassinated near the beginning of the movie. The man Kenshin assassinated, Kiyosato Akira, had been Tomoe’s fiancé. Right before his murder, Kiyosato managed to give Kenshin the first half of his scar. Over the events of the movie, and while Kenshin still doesn’t know Tomoe’s true identity, the two of them get married and go into hiding. They stay at a small, secluded house together, where they slowly fall in love.

Unfortunately, Kenshin eventually does learn about the plot to have him killed, and he goes off to confront Tomoe and her collaborators. By this point in time, Tomoe has had a change of heart, and she gives up her own life in order to save Kenshin’s. As she lies dying in his arms, she takes a knife and crosses out the scar Kiyosato gave him as an act of forgiveness. After her death, Kenshin vows that he will never kill another human once the war is done. 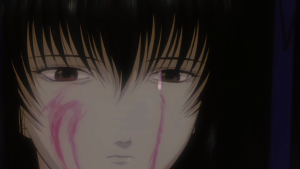 I really like all of the characters in this movie. They all seem very well developed and I can envision them as real people quite easily. However, since the story is a character study for Kenshin, everything does revolve around him. Tomoe is our other big character, and her role in the plot is entirely dependent on Kenshin. I’ve struggled for a long time as to whether or not I like her character. On the one hand, she exists to further Kenshin’s storyline—but so does everyone else—and she eventually falls in love with him, despite the fact that he murdered Kiyasoto. On the other hand, I do admire her strength to forgive Kenshin—which only happens after they spend a large amount of time together, she gets to know him, and he vows to keep her safe—and I also admire her courage when she betrays the people with whom she conspired to kill Kenshin and gives her life for his.

From what little I did read of the original series, this holds true with the overall themes of the manga—atonement, peace, and romance—and it’s a little hard to have atonement without some kind of forgiveness. Kiyosato forgives Tomoe for falling in love with Kenshin, and she in turn forgives Kenshin for murdering Kiyosato. This leaves Kenshin, who wants to atone for his crimes against both of them and everything else that he’s ever done. Kenshin eventually forgives himself and finds some inner peace.

I warn you that the feel of this movie is a lot different than the feel of the original series, and if you fall in love with this and want to read Rurouni Kenshin afterward, the change can be very abrupt. Additionally, the art of the movie can be a bit inconsistent. Samurai X has a habit of switching between animation and real video. Sometimes it feels like a really lazy art choice on an otherwise good story. I would recommend getting the Director’s Cut, as it flows a lot better and runs like a continuous two-hour-long movie, as opposed to numerous episodes that all begin and end in random places. If you’re a fan of Rurouni Kenshin, chances are that you’ve already seen Samurai X: Trust & Betrayal. However, even if you’ve never gotten into the original story before, this is still a movie that you should probably watch.