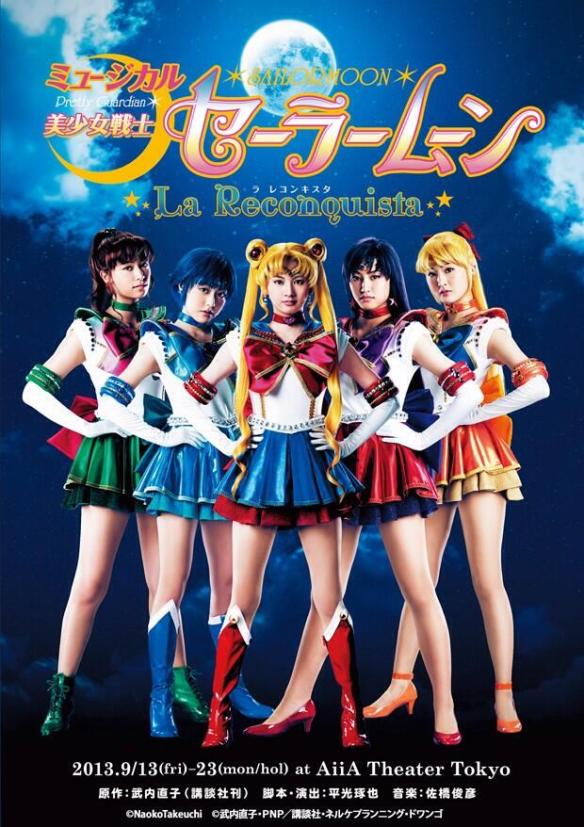 After months of anticipation I finally got to view the new Sera Myu, La Reconquista. Though the official DVD is not yet available for purchase, it was possible to buy a “net ticket” and watch a streamed performance. These net tickets were only available to Japanese viewers, but thankfully various fans were able to work together to record the stream and subtitle it. Full credit to those involved, as well as the video download, can be found here.

So, what were my opinions? They are to be found under the cut!

The show begins in a very abrupt way, typical of the Myus, jumping right into a boisterous number as a means of setting the scene. I always got the feeling that the creative teams behind the musicals wrote them with the assumption that the audience already knows and likes the characters and premise of the story so they don’t bother establishing the universe but rather begin with the story, and this musical was very much the same. The audience’s knowledge of the material is assumed, so elements like characterization and world-building take a back seat to the individual story being told.

This is not to say that these elements are not present, just that they are not given the emphasis they would be if the musicals were creating their stories from scratch. For example, it’s clear that Sailor Mercury (the secondary character given the most individual attention in this show) is a predominantly shy, thoughtful girl who will come to life in defense of her friends. The way these traits are presented, however, is quick and direct, as if the character has already gone through her arc of development and the personality is already understood to be present.

In the musicals it’s the story, not the characters, which is new and therefore given preference in the writing. The story of this musical is a re-telling of the ‘Dark Kingdom’ arc and begins with the five Sailors already awakened and working together when they meet Queen Beryl and the Shitennou. The romance between the Inners and Shitennou plays out in this musical, as it has in those of the past, with Ami/Zoisite given the most attention.

The romance between Serenity’s and Endymion’s guardians was an idea Naoko had, but never incorporated into the story. This image from one of her artbooks, however, has made it a popular topic in other incarnations of the story.

The romance between Usagi and Mamoru is also given much attention in the musical which made my shipper heart very happy.

While the beginning of the show is enjoyable, it really picks up when Queen Serenity (making her first-ever appearance in the musicals!) calls the Sailor Soldiers to the moon and reminds them of their past lives. The fall of the Silver Millennium is acted out as a flashback and is the highlight of the show for me. It is the segment in which the relationships between the characters feel the most natural and which really illustrates why Queen Beryl is attacking the Sailor Soldiers in the first place. It also establishes the title of the show, because once our heroines learn of their past, they vow to reconquer the Dark Kingdom in the present day.

The songs, for the most part, range from decent to excellent. My only disappointment was actually in the title song which used one of my favorite things to hear in a musical: multiple verses being sung over each other. Almost all of my favorite musicals employ this, from The Secret Garden‘s “Quartet” to classic Myus like Yume Senshi‘s “Triple Dreams” For this effect to be achieved properly, however, counterpoint must be used and La Reconquista really lacked this in its title song. Toward the end it sounded like a garbled mess of syllables rather than a piece of music.

The performances were rather good. Satomi made an adorable Usagi; Yuuga’s Mamoru was warm and loving; and the rest of the cast did well. Particularly noteworthy performances from Jamie Natsuki as Queen Serenity and Shintani Mayumi as Lemures Baba who lit up the stage in each of their scenes; Natsuki with her grace and Mayumi with her humor.

The show was fantastically enjoyable and I highly recommend it to any Sailor Moon fan. If you’ve never seen one of the Myus or are on the fence about them, this is easily the choice with which to wet your toes. It has a much easier to follow story and simpler costumes than most of the originals, but still has the same charm and spirit.