Me. At Tekkoshocon. Bein’ a dude.

A few months ago I was at my hometown con, Tekkoshocon, in good ol’ Pittsburgh, PA, and witnessed an interesting exchange. While waiting in line to ask about prop-check, I overheard the guys in front of me asking the con staffers if they’d seen any male crossplayers. They were participating in a scavenger hunt, and dude crossplayers are apparently rare enough to merit a spot on the hunt’s item list. This set me to thinking: Why is that?

I’ve already written once about crossplay a long time ago, but I think it’s worth revisiting. Crossplay is the practice of cosplaying as a different gender than the one you identify as, and it’s extraordinarily common at conventions these days. Except for one thing: most crossplayers are women dressing as men. I chalk this up to a number of factors, including the proportionally larger number of male characters compared to women in popular geek culture, and the fact that it’s far more of a societal no-no for a man to dress in women’s clothing.

The first factor is a pretty basic issue. Women continue to lack representation in popular media, and many female characters are flat, boring, stereotypes of sexualized femininity, or all of the above. Given this, it’s unsurprising that men and many women choose to cosplay as male characters, and unsurprising that men and women alike would choose to avoid dressing as vapid sex-object women if given the chance.

The second is a little more complex. Let’s get theoretical for a sec. In Simone de Beauvoir’s The Second Sex, she wrote about how maleness is considered the default or the standard, and femaleness is inherently othered. In a nutshell, there are people and then there are women. This is frighteningly applicable in a microcosm to crossplay. Women can certainly level upwards toward masculinity and no one thinks that much of it, but society frowns much more on a man slumming down to cosplay as a woman. A woman in pants is a non-issue but a man in a dress is strange or weird. Hell, we renamed eyeliner to guyliner to make it more masculine and safe for dudes to put on their faces. In order to not be considered feminine, or worse, gay, many male crossplayers resort to comedically emphasizing their stereotypical maleness by, for example, not shaving their facial hair.

For a long time I resented the cis male crossplayers I’d seen, because I’d never seen one do a costume where his assuming femininity for the day wasn’t the butt of a joke. On my side, I was working really hard and dedicating myself to creating the best costume and presenting the best representation of a character that I could, even if that meant a day of physical discomfort from bound-down boobs. I was putting my all into accurately representing their gender, and they couldn’t even pretend to give mine some respect? It was several years into my congoing experience before I saw a cis male crossplayer who was just a crossplayer and not a punchline, and I credit that guy, whose centaur Neliel cosplay was so phenomenal it blew our whole group away, with opening my mind to the fact that guys could crossplay respectfully too.

Here’s the thing, though. Cons are a safe space, or should be. Over the summer I was at a con where my (female) friend, my brother, and I all crossplayed as Homestuck characters. Over the course of the full day my brother spent in a poofy skirt, he did not get a single bit of hate or any crass comments. “No one gave a shit,” he succinctly noted—and hell, people loved our costumes. I wouldn’t be surprised if this was the norm in most conventions—if you have a good costume and a good attitude, no one gives a shit whether your gender matches your character’s. I hope in the future I’ll see more male crossplayers as a reflection of the accepting nature of con culture.

Tied into that, I also hope that the message that femininity is not a joke will become more widespread and understood among the cosplay community. Male crossplay has the potential to be just as impressive and creative as female crossplay, but first it has to stop being about making a masculine mockery of female characters. 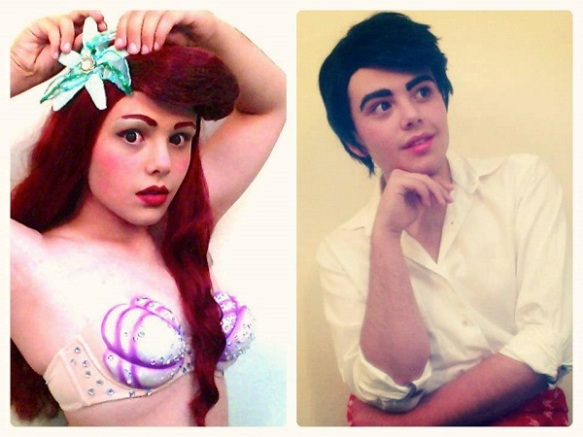 In short, be this guy.