So I’m a pretty big fan of Welcome To Night Vale just in general. It’s pretty great. And one of the things I love about it is that, even though it’s already more diverse than most media, it isn’t afraid to continue adding in more intersectional diversity. I guess they figure haters gonna hate.

And Night Vale fanfiction is no stranger to this philosophy—the fanfic I’ve found has suggested such additions to canon as Carlos being trans*, Cecil being nonbinary, and the faceless woman who lives in your house being Old Woman Josie’s girlfriend from high school.

How I Survived My Summer Vacation, by Tamika Flynn, Age 12 3/4 is a gem among stories of this sort, and besides being intersectionally awesome, has got superb writing to boot. 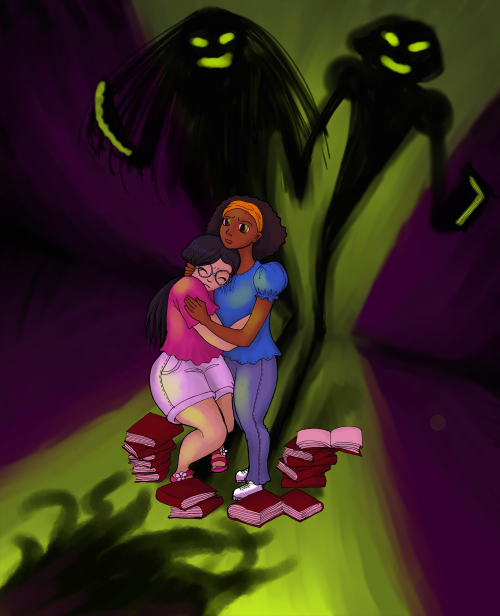 fanart for this story by cactuartamer on tumblr

This fic, by thingswithwings, occurs during the events of Welcome to Night Vale episode 28, “Summer Reading Program”, but tells the story from Tamika Flynn’s point of view. Tamika is trapped inside the library, and with only her summer reading list and her wits as her guide, must outwit the sinister, inhuman librarians and help the other kids trapped with her survive. She can ward the librarians away, she discovers, by holding up the “Great Western Canon” books she’s read (think Lord of the Flies, Jane Eyre, Heart of Darkness, etc.) and shouting out what she’s learned.

The copy she grabs has a shell on the front cover, which is pretty boring, and then the book is pretty boring too, but at least she reads it fast, before any librarians spot her.

“A timeless classic about the struggle between good and evil in our natures! I liked the parts where the boys were cruel to each other because it showed how kids are cruel, like in real life, because it’s just the way humans are!” she cries, holding the book in front of her like a warding-off talisman when the first librarian comes howling for her blood.

The librarian pauses, considering. Then it opens its sharp-toothed maw and a sound issues forth, a terrible sound that makes Tamika want to fall sobbing to the floor, or run away, or scream.

They get you if you scream.

Tamika holds her ground. Her knees only knock together a little. She bites her lip and tries to think of her mom.

She realizes that the sound emerging from the librarian is a question.

“Themes?” it demands, in an elongated, unearthly howl. Its claws click against each other.

“Leadership and the use of power,” Tamika replies, and she hopes it doesn’t sound like a scream when she says it. “The meanings of empathy and compassion! The strong preying on the weak!”

The librarian bends over her, looming, huge, awful, its eyes white and unblinking behind cute vintage spectacles. For a long moment Tamika is sure that she will be devoured, sent to join the ranks of the Children Who Spill Things and the People Who Highlight In Books. But then its hot breath passes over her, and the librarian retreats. Once Tamika feels herself breathing again she notices a white piece of paper on the floor with her name at the top and a single gold star pressed neatly down next to the words “Lord of the Flies.”

Just imagine this stock photo but with a little more bloodshed.

Tamika, however, is not content only to save herself. She teams up with a girl named Beatrice Wong to help the other children not only survive the summer but to defeat the librarians on their own terms. In the meantime, Tamika and Beatrice grow closer in an adorable sort of innocent tween love way.

This story is suspenseful, intelligent (especially if you’ve read the books thingswithwings chose to mention, because the commentary about them can be pretty snarkily funny at times), and really in line with the tone of the actual Night Vale series, which is something I haven’t seen a lot of fics succeed at.

Read about Tamika and company here.

1 thought on “Fanfiction Fridays: This summer vacation story is better than yours.”