Lal: “I am gender neuter. Inadequate.”
Data: “That is why you must choose a gender, Lal, to complete your appearance.” 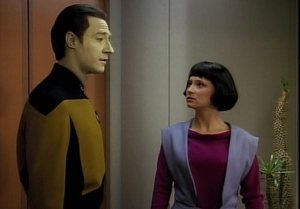 Oh, Star Trek, you are one of those shows that consistently disappoints me. This conversation from Star Trek: The Next Generation perfectly illustrates how our society tends to view gender in a strict gender binary. In the episode “The Offspring”, the robot Data creates his own android progeny named Lal. He decides to create Lal gender neutral, so that Lal can choose what gender to be. It seemed like a great idea, but it quickly turned problematic when Lal declared gender neutrality “inadequate” before promptly choosing a female gender. For people who don’t fit the gender binary, this statement is wildly offensive. The message seems to be if you aren’t male or female then you are… inadequate. How fucked up is that?!

There aren’t many characters who exist outside the gender binary (that is, the idea that the only genders are male and female) in pop culture and that is a huge problem to begin with, but recently, I was thinking about the few who canonically do exist outside of the gender binary. An entirely new problem presented itself. Here are a few characters (by no means a comprehensive list) that I can think of that are genderqueer characters.

Above are three characters that have been, in canon, by the writers and all the Powers That Be, defined as non-binary identifying characters. Desire in Neil Gaiman’s The Sandman comics is the literal embodiment of desire.

To show that Desire represents anything a person could desire, Desire is drawn as being

both male and female in some way, though how that is represented tends to change with Desire’s appearance. The other characters acknowledge this gender-fluidity as well. The other Endless, Desire’s siblings, will refer to Desire as “brother/sister” or simply as “sibling.” Desire is an interesting and complex character, but probably not the best representative of non-binary people, as Desire is exceedingly cruel. Desire rapes Unity Kinkaid and then tries to get Dream, Sandman’s protagonist and Desire’s brother, to kill Unity’s granddaughter Rose Walker, all in an attempt to just bother Dream.

Dax is a character from Deep Space Nine and is part of an alien species called the Trill. The Trill are symbiotes that live inside human hosts. The Trill seem to be either nongender or genderfluid, because they have no preference for what sex their host is. The gender dysphoria and relationship problems (as far as sexuality goes) that accompany this is often discussed in Deep Space Nine. However, even Dax’s gender seemed to mostly be used by the writers to create awkward sexual tension between characters who may have known Dax when Dax was male, but are now attracted to their old friend as a female. Or to justify lesbian relationships by playing them off as not “really” being homosexual, because Dax would only like a girl because Dax used to be a guy. Sure, that makes perfect sense.

The J’naii, an alien species from Star Trek, have an androgynous society which views sexuality and gender as perversions. Out of the three examples I’ve mentioned, this is probably the least favorable view of non-binary characters. The J’naii are portrayed as having an oppressive society that shames any type of defined gender expression. In the episode “The Outcast”, when Soren, one of the J’naii, confesses to being female and has an affair with Riker, she is viewed as an abomination and taken by her people to undergo “psychotectic” therapy. Between this and “The Offspring”, I have to wonder if TNG writers didn’t think non-binary people were committing some sort of atrocity just by being themselves. Though I suppose I should be kind and point out that the TNG writers probably didn’t understand much about gender or people who don’t fit the gender binary.

So, there are already very few genderqueer characters, and the few that are in pop culture are often portrayed poorly. And now we get to the other problem. None of these characters are human.

Why is this an issue?

We have talked before about certain nonhuman characters who really should be portrayed as outside of the gender binary. Data is a robot—the idea that he would have a gender, that any robot would have a gender, or at least a strictly defined one, seems a bit odd. At the very least I would like to know how and why Data decided to identify as male. Loki often shapeshifts between male and female forms—does that mean that Loki identifies as both male and female, neither, or is the idea of gender itself like a costume for him? And speaking of shapeshifters, we have also discussed Xavin, from Marvel’s Runaways, before. Xavin is a Skrull, an alien species that can shapeshift. Yet despite their ability to shift from one sex to the other seamlessly, they still, for some reason, only identify along the gender binary. Wouldn’t a race of aliens that can easily change their sex have a different concept of gender? The same can be said about Castiel and the other angels from Supernatural—as an angel, a wavelength of celestial intent, wouldn’t the idea of gender be foreign or at least different to Castiel?

Having nonhuman characters who don’t fit the gender binary can be a great thing, because, in the same way that Wonder Woman, brought up in a matriarchal society, can critique the patriarchal organization of our society, nonhuman characters who don’t fit the male/female binary can critique our society’s false ideas about gender.

But if the only non-binary identifying characters people ever see aren’t human characters, people start to wrongly assume that only nonhuman characters can be defined as anything other than male or female.

A perfect example of this wrong assumption is Captain Jack Harkness. Not because he is nonhuman or non-binary identifying, but because he is pansexual. Pansexuality, as defined by Wikipedia, is “sexual attraction, sexual desire, romantic love, or emotional attraction toward people of all gender identities and biological sexes.” 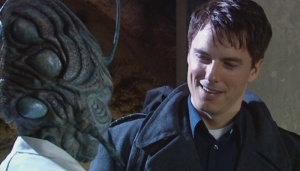 identifying people? Before I started watching Doctor Who or had even heard of Torchwood, people told me I should watch the show because Captain Jack Harkness is pansexual. (Later I would discover that most of the writers on Doctor Who and Torchwood actually view Jack as bisexual.) I eventually found out that most people labelled Jack pansexual because he was attracted to aliens as well as humans—not because he showed attraction to genderqueer people. Some people have even angrily commented that there are no real pansexuals because pansexuals can’t be with sentient non-human species. These people mistakenly think pansexual means attracted to all life forms, and aliens haven’t yet been proven to exist. This argument not only erases the sexual identity of pansexual people, but it also erases the gender identity of non-binary identifying people by claiming that no humans fall outside the gender binary.

Let’s be very clear: there is actually no gender binary. Human beings do not fit into little male and female boxes. A person does not have to be an alien, a robot, or an angel to identify as a gender other than male or female.

It is very, very rare when any non-binary identifying characters show up in pop culture, and the few who do show up are almost never human, perpetuating the lie that humans are only male or female. I would love to see a story that finally depicts non-binary characters in a way that is actually true to their experiences—that actually shows that humans can be human without being male or female.

11 thoughts on “Sexualized Saturdays: Non-Human Characters Outside the Gender Binary”