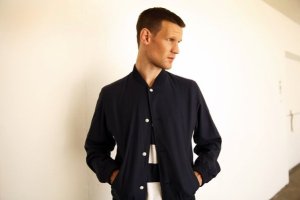 Let’s talk about Matt Smith. Don’t you just love those words? In case you read this blog and you don’t know who Matt Smith is (in which case I’m very confused about who you are), he is the actor who plays The Eleventh Doctor in the long-running BBC scifi show Doctor Who. He’s quite talented, to say nothing of his boyish good looks and impeccable hair on camera (swoon!). He’s also recently filmed the last of the episodes in which he will play the Doctor. It is the end of an era, as he passes the torch he received from David Tennant to Peter Capaldi.

While you might know him primarily as the Doctor, the BAFTA award-winning Smith has also done a fair amount of stage-acting. 2005 saw him perform as the outspoken young student Lockwood in The History Boys at the Royal National Theatre. In 2007, Smith played Henry in the Polly Stenham play That Face (which is a must-see), and was nominated for an Olivier Award. As a matter of fact, Matt Smith will be leaving the silver screen, if only momentarily, to return to his theatre roots… as a sadistic serial murderer.

Smith will take up the role of Patrick Bateman, the titular antihero of the novel “American Psycho”, in Rupert Goold’s London production of an eponymous musical. Something about imagining Matt Smith sing his way through emotional manipulations and a series of violent murders is darkly comical, and exciting, though I’m not sure how else to feel about it. By the time the last episode featuring the Eleventh Doctor airs, Smith will be well into his melodic axe-murdering, as the official run lasts from December 12th to January 25th at the Almeida Theatre, with previews as early as December 3rd.

While I’m certain that Smith is the biggest name attached to this production, further reading of the billing will reveal some other familiar names, like Roberto Aguirre-Sacasa, charged with transforming Ellis’s novel into a play. The author and playwright has turned his pen to Glee and the Broadway production of Spider-Man: Turn Off the Dark, to say nothing of his extensive work at Marvel Comics on titles like Loki, Secret Invasion, Marvel Knights, Nightcrawler, and The Sensational Spider-Man. His plays have earned him GLAAD Media Award nominations, The Excellence in Playwriting Award from the New York International Fringe Festival, and a Harvey Award for Marvel Knights Four. The music for this “American Psycho” production was written by one Duncan Sheik, who also wrote music for the Tony Award-winning Spring Awakening.

The production will certainly not lack for talent, but I am left to wonder what tone this production will use to address the rather violent content of the novel, and how it will compare to the 2000 film which starred Christian Bale. I predict that we’ll get our own opportunity to evaluate it. Should the musical be well-reviewed and well-received, surely having its viewership boosted by Smith’s popularity, it could soon make its way across the pond.