Do you know, Sleepy Hollow has actually made me look forward to Mondays.

This episode opens with a little girl running through the forest, and daring a little boy in colonial clothing to follow after. The boy is found, disoriented and confused, in Sleepy Hollow. Abbie and Ichabod, who are in Corbin’s cabin, are conveniently close to where the boy was found, so they go and investigate. Spoilers after the jump!

The boy can only speak in Middle English, which Ichabod conveniently knows, and he obviously has some sort of plague, as evidenced by the black veins showing through his skin. Irving calls the CDC and they quarantine him. Ichabod talks to the boy, Thomas, in Middle English, and starts to suspect that Thomas may be from the lost colony of Roanoke. Other people quickly become ill, and as news of the virus spreads, people start to leave town.

He really should have been speaking Early Modern English, like Shakespeare, as Roanoke wasn’t founded until 1585—but I suppose Ichabod had to show off his language skills.

Meanwhile, Morales, who’s been jealous of the time that Abbie’s been spending with Ichabod, goes to his partner and to Irving with his suspicions that Ichabod isn’t who he says he is. Neither listen to him, so he calls Oxford, who says that they do indeed have a history professor named Ichabod Crane and he is currently on sabbatical with the Sleepy Hollow police department. Strangest fucking thing. Irving seems to know more than he lets on about it, as well.

Ichabod and Abbie try to track Thomas’s trail through the woods, but they’re stopped by a deep lake. However, Ichabod manages to find a hidden path over the surface of the lake, handing Abbie across it like a true gentleman, and then they find the lost colony of Roanoke. All of the people in the colony have the same black-veined sign of contamination—but none of them are sick. A leader of the colony tells them, in Middle English, that after the youngest Roanoke child, Virginia Dare, died, her spirit led them to this safe land. Something about it prevents the plague from spreading. Ichabod and Abbie are told that if Thomas returns to the colony, he and all the other people should be saved. 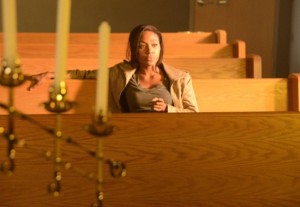 Upon returning to the quarantined hospital, Ichabod discovers he’s been infected, and he, too, is put into quarantine. Abbie stumbles into a chapel and asks God for a sign, which she sees in an old lady who crosses herself with holy water. She manages to convince Irving that it’s the springwater in Roanoke that can heal the infected people. Irving arranges for Thomas and Ichabod to be transferred to a “better equipped quarantine facility”, and once they’re loaded in the EMT truck, Abbie drives them to the lost colony. The three of them struggle through the woods and, just as the Horseman of Pestilence is about to strike them down, Ichabod and Thomas plunge into the springwater of Roanoke and are healed. When Ichabod surfaces, though, Roanoke and the Horseman disappear around them and it’s revealed that everyone was dead to begin with.

That pretty much highlights Sleepy Hollow’s biggest problem so far—what even is plot? While this episode was a great ride, full of sass, banter, and Ichabod’s semi-successful adjustment to the 21st century, if you thought about the episode at all everything fell apart. Who was the girl at the beginning? Virginia Dare? If so, why would she lead Thomas away from the colony? The people of Roanoke still had black veins, but they weren’t sick, and yet when Thomas was healed he no longer had black veins. What did the Horseman of Pestilence even do? Was Roanoke trapped in a pocket of space-time in something ripped straight out of Doctor Who?

This has better rules than Sleepy Hollow does right now. This.

I know a show like Sleepy Hollow is based on a certain suspension of disbelief, but especially in its first few episodes, it has to establish some rules. Supernatural has rules. Teen Wolf has rules. Even Welcome to Night Vale has rules. So far, Sleepy Hollow has no rules of its own that it can go out of its way to break, and that leads to episodes like “John Doe” seeming jumbled and confusing. Just throwing all weird horror/thriller/fantasy elements into a bag and pulling out random ones as suits the writers does not a good plot make. And this sort of mishmashed plot is not going to hold up to the scrutiny of an episodes-long season.

Other than that, though, I really liked the little things about this episode. Someone in the writers’ room clearly set the sass-o-meter to eleven and then forgot to turn it back down. And if they actually talk about the concept of class in an American TV series, I don’t even know what I’m going to do. Most of all, I loved that they chose to talk about Roanoke, which is an American myth—it really helps ground the fact that this show is a fantastical twist on American mythology and American history, not the myths and legends of any other culture. And I love that aside from Sheriff Corbin, the only white person we’ve explicitly met in the Sleepy Hollow police department thus far has been Morales’s nameless white partner. Morales, Andy Brooks, Irving, and Abbie are all characters of color. It’s a truly American department for a truly American show. 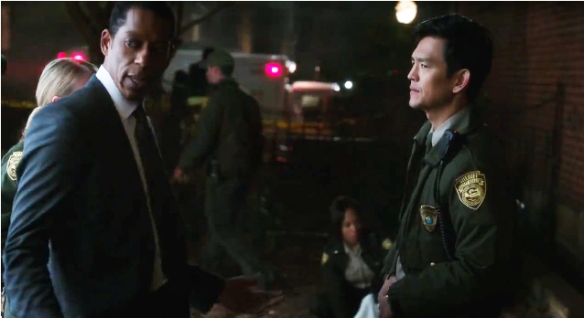 I’m not really sure what to make of the fact that Abbie found her sign in a chapel, but as she’s one of the witnesses in the Bible and her mom had her read Revelations as a child, the religious overtones were expected. It just rankled me that she solved this week’s mystery because she “had faith”. I think the show has more to say on this matter, though, as Ichabod says “we will require much more than faith if and when the Horseman returns,” so I’ll let the show finish before I start in on the presumed religious message.

The next episode unfortunately doesn’t air till November 4th, but it seems like there’s a lot to look forward to there as well. Hopefully we’ll learn more about Ichabod’s wife, Katrina, who reveals in this episode that she’s been trapped in Purgatory by our big bad, the demon Moloch. As things stand, she’s the least-developed of any of our title card characters thus far, and I have a feeling that her witch background is more important to the show than just shouting random warnings at Ichabod each episode. Speaking of witches, what is the deal with Captain Irving? He definitely knows something, but if he’s a witch, I can’t figure out if he’s supposed to be part of the good coven or the bad coven. Three weeks can’t pass quickly enough!