This episode had Abaddon in it, so it was already superior to last week’s. But on the whole, how did “Devil May Care” measure up? Hit the jump for my review.

Well, it was definitely better than last week’s offering, in that I actually enjoyed watching this one. 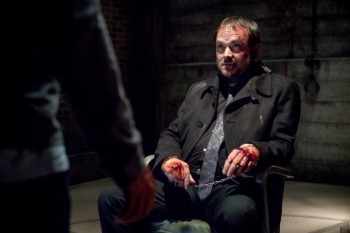 So Sam and Dean get back to the Batcave, and Kevin is not happy to see that they’ve decided to not kill Crowley. They shut up Crowley in the demon torture dungeon (finally, they used the demon torture dungeon!) but end up leaving shortly thereafter on a case. Kevin is left with Crowley, and makes poor judgment calls—that is, he talks to Crowley instead of ignoring him.

Meanwhile Abaddon is back, and is disgusted by the state of demonhood under Crowley’s rule. She starts to put together an army, forcing a bunch of lower-level demons to leave their deal-friendly meatsuits for more heavy duty, war-ready models. She kidnaps two hunters, an older white dude and a young brown girl, and uses them as bait to draw the Winchesters into a trap. 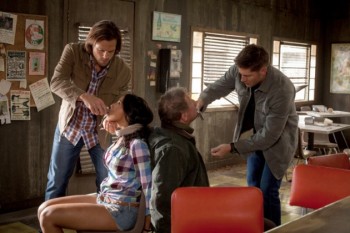 Dean and Sam head off to rescue the two hunters, and end up pretty solidly outmatched by Abaddon and her demon crew. Sam’s getting the crap kicked out of him, and Abaddon has Dean on the ropes, when Ezekiel decides to rear his head. Some cool burnt-out wing effects and holy smiting later, Abaddon hightails it out of there and Dean is left to make up more lies to explain to Sam how they managed to win against the odds.

Finally, back at the bunker, Kevin is ready to leave, as, while he was letting off steam on Crowley’s face, Crowley might have let slip that Mrs. Tran was still alive. Kevin is on his way out the door, but Dean convinces him to stay after all, saying that he considers Kevin, Sam, and Cas the only family he has left, and he doesn’t want Kevin haring off after the rumor of his mom just to find her dead, or even alive but an empty shell of her former self. Kevin reluctantly agrees to stick around. Meanwhile, Crowley has decided to play along with the boys, and is giving up names of topside demons as a way to get on the Winchesters’ good side.

I’d vote for her. That’s how rulers of Hell get their jobs, right?

So, things I liked about this episode. First, I really love Abaddon. She’s an awesome villain, I like her style, and I am very excited that they got Alaina Huffman back to play her again. She’s powerful in a way that most villainous women on the show haven’t been—she doesn’t follow anyone’s orders, and she wants to be the new Queen of Hell. Ruby, Lilith, hell, even Meg, all were following the beat of someone else’s drum, but Abaddon doesn’t play that game.

Second, and it’s depressing I have to say this, but the brown girl hunter (whose name was Tracy) survived the episode! I’m sure I’m not lucky enough for her to be a recurring character, but she was really cool, and I’m really happy she didn’t die. She first appeared in the episode using her femininity to trick a vampire into letting her get close, and then killing him—I love it when badass ladies use terrible ‘women are weak’ stereotypes as a weapon to get the jump on arrogant men—and she seemed to hold her own well in the fight against the demons after Dean and Sam got her free. She also had an interesting backstory—she became a hunter after her family was killed in the demonic celebrations that followed Sam’s opening of Lucifer’s cage back at the end of S4, so she has, or at least had and got over after meeting him, a particular dislike of Sam. 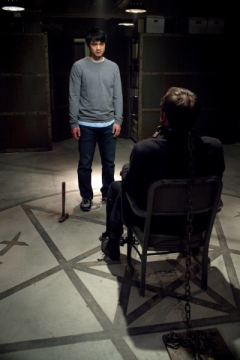 Kevin had some great character moments in this episode. Using his own hacking tactics rather than the Bobby-esque “pretend I’m their commanding officer” technique to get them past the suspicious officials at the crime scene was awesome. In addition to that, his scenes with Crowley really gave Osric a chance to show the audience a darker side of Kevin.

I continue to share Lady Geek Girl’s feelings of displeasure and disappointment at the stupidness of the Ezekiel storyline, but—sigh—what would Supernatural be without a stupid plot device that pushes Dean and Sam apart despite Dean’s good intentions? (Answer: a better show with character growth, but I digress.)

All told, I was not looking forward to watching this episode at all, and it surprised me by being actually quite enjoyable. Tune in next week to see the fandom explode—Castiel was kissing a girl in the preview.