This week’s Web Crush is an oldie but goodie. Now, when I say “old”, that’s in internet years, of course. And, though we’ve certainly celebrated the work of this brilliant, witty artist before on this blog, it’s never been dubbed a Web Crush. I intend to change that. Active since 2007, and under its current title since 2008, I want to give a big geeky send-up to Hark! A Vagrant.

Hark! A Vagrant is a webcomic, updated whenever Kate Beaton seems to feel like updating it, that deals primarily in history and literature. Subjects range from Napoleon Bonaparte, to Pride & Prejudice, to the sack of the monastery on Lindisfarne. Without a single gap in satisfaction, an entire afternoon can be spent clicking the random button through Beaton’s comics and the reader will probably learn something between bouts of peeing themselves with elitist laughter. Let me give you an example. Comic #259 takes on The Great Gatsby in a way that was, frankly, much more compelling than this year’s feature film: 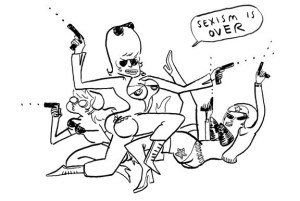 Hark! A Vagrant will occasionally stray from historical incident and great works of literature to accomplish other goals. It goes after narrative idiocy like the “Strong Female Character” by lampooning modern tropes in films, comics and television. The comic has had a fair amount of success, due in part to its varied and erudite subject matter, as well as Beaton’s sense of pacing and timing to maximize humor, which can be quite challenging on the page. In fact, Beaton is the winner of four Harvey Awards, A Doug Wright Award, and has earned multiple nominations for Joe Shuster Awards (those last two are apparently Canadian things).

Anyway, this comic is my web crush not just because it is funny, or because it appeals to the tiny little history nerd in my heart, though that would be enough for me. Beaton’s work is characterized by perspective, and by her regular comedic and visual recourse to a feminist viewpoint. E.g., her comic on Straw Feminists in the Closet!, or her incredibly tired-of-your-shit Wonder Woman.

Beaton has self-published one book, Never Learn Anything from History, and another of her books, Hark! A Vagrant, has been published by Drawn and Quarterly Publishing. You can get both books for pretty cheap, and I think you can also snag a Beethoven Birthday Party Calendar if you’re so inclined. You can also read a Wired Interview with Beaton here about her famous Fat Pony and an upcoming project.

I’d like to leave you with Hark! A Vagrant‘s most recent entry, on why maybe Black Canary shouldn’t go to rock concerts.