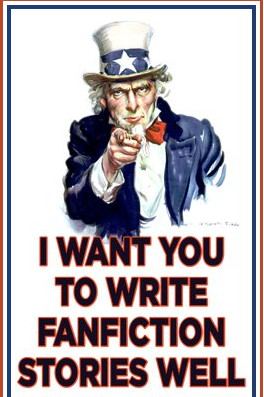 fanfiction before, but complaining about it isn’t enough for me. In my head and in my heart, I have always truly believed that fanfiction is both for pleasure and entertainment, as well as a safe space for authors to finally create stories with diverse characters that you don’t often get to see on TV. However, a trend has emerged such that most fanfiction centers around two straight, white male leads whom authors write as queer, otherwise known as slash fanfiction. These types of pairings have dominated fandom to the point that there is significantly less fanfiction featuring any other type of character or pairing. Canonically gay characters, any lesbian pairings, female characters, or characters of color seem to be almost utterly left out of fanfiction. And in some cases, even when they are incorporated, they end up being vilified even more in the fanfiction than in the TV shows they originally come from.

On top of this cross-fandom endemic problem is the issue that these typical slash pairings have dominated so much of the fandom that many authors have confessed to me that they would write different fanfiction if they thought other people would actually read it.

It was then I realized that I was part of the problem.

I prefer to think that Dean and Seamus actually got married.

When I was younger, I read every Harry Potter fanfic. And no, I don’t feel like I’m exaggerating. Aside from some very skeevy fanfiction, I feel like I gave almost everything in the Harry Potter fandom a try. I think that’s largely due to the fact that, unlike now, I wasn’t a part of any other fandom. When I got bored with Harry Potter, I couldn’t just hop over to read some Doctor Who fanfiction. I didn’t even know what Doctor Who was yet. As a result of being in basically one fandom and easily bored, I hopped from pairing, to pairing, to gen fic (fic with no pairings).

I read Harry/Draco fanfiction, Dean Thomas fanfiction, Hermione Granger fanfiction, and much, much more. I even got annoyed if I couldn’t get into a new pairing, since that knocked out a whole section of fanfiction that I wouldn’t want to read. I remember being super sad that I didn’t think there was enough chemistry between Hermione and Ginny to really get into the pairing. But I read so many different types of Harry Potter fanfiction with all different types of characters and pairings because I read a summary, glanced at the pairing, shrugged and said, “What the hell? I’ll give it a try.”

Which leads me to my being part of the problem.

Since I am in more than one fandom now, chances are that if I get bored with Destiel or if my favorite fanfics haven’t updated in a while, I can just switch over to Teen Wolf and read Sterek. These are my usual pairings. But if you’ll notice, both those pairings are the overwhelmingly popular ones in their fandoms. To no one’s surprise, both pairings are comprised of two canonically straight white guys. So I’m trying to challenge myself to read new fanfiction and I encourage everyone in every fandom to do that as well.

My reaction when I realized I was part of the problem.

Take a week each month—if you’re hardcore, try it all month or even a whole year—and read fanfiction with characters and pairings you have never tried before. And try, just try to focus on characters of color, female characters, queer characters, and characters with disabilities. Try to read about the characters that are too often ignored. Instead of reading yet another Destiel high school AU, maybe read a fanfic about Uriel and why he joined Lucifer. Instead of reading Spock/Kirk for the billionth time, maybe try out that Uhura/Gaila fanfic. It’s fine if you find out the pairing or story isn’t for you. Just keep looking. If things don’t change after the week is up, next month pick a week and try a different character or a different pairing to look at. You might be surprised by what you find and start to get interested in. And since fanfiction is about exploring what we don’t see in the canon material, maybe you’ll find new headcanons or new interpretations of the source material that will let you look at said source material with new eyes.

And for those of you who write fanfiction: I would encourage you to do the same, but write a different pairing or about a different character than you normally would for at least a week each month. For all you know you might end up becoming the star author of a rare pairing.

So fandom, will you accept the challenge to try new fanfiction? If you read or write anything good, let me know—we might read it and do a Fanfiction Fridays review of it!