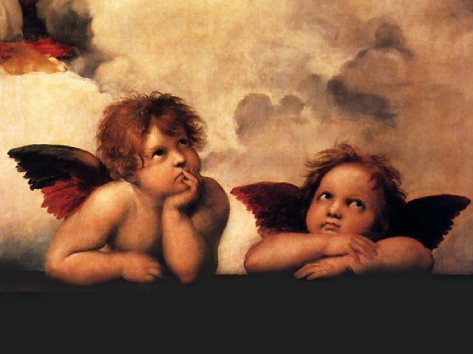 Earlier this month, the Catholic Church celebrated the Memorial feast of the guardian angels—it’s like a holiday to celebrate that spiffy angelic being given the job of poking you in the direction of Heaven. In honor of it, my mom planned a lesson for her fifth grade Sunday School class about what the Catholic Church thinks about angels, particularly guardian angels. Afterward, she told me that her students had all kinds of weird ideas about who and what angels are, none of which were really drawn from our own faith tradition at all.

You see, most people in America tend to think of angels as cute baby cupids from old, beautiful art, and as beautiful people who fly around, sit on clouds, and play the harp. They also tend to think that nice people turn into angels when they die, so that they can watch over us. But while those first two ideas clearly come from artistic representations of angels throughout history, the idea that humans turn into angels when they die really doesn’t have much religious basis… in Christianity, Judaism, or Islam. In the big three Abrahamic religions, angels (and demons, also known as fallen angels) are completely separate created beings. To any of these religions, it’s a bit like saying a dog turns into a human when it dies—it just doesn’t work in any of our cosmologies. And while it’s a nice, comforting idea that angels are beautiful, harp-playing souls of the much-loved departed, at the end of the day it’s a rather boring concept. Comforting, yes, but boring. But why must we stop at boring? Even if we don’t want to get our ideas of angels directly from religious faith, there are plenty of much more interesting examples of angels in pop culture.

The three Abrahamic religions have slightly different ideas about angels. In Judaism, angels are most often called the Hebrew word “malak”, or “messenger.” This translates to “angelos” in Greek, which is where we get the word “angel.” The chief duty of angels is to deliver messages between God and humanity. In the Hebrew Scriptures (aka the Old Testament), angels also pray (Zechariah 1:12), heal (Isaiah 6:6-7), fight (Daniel 12:1), and do the bidding of God. In ancient, Second Temple Judaism, angels also teachers and are tasked with guarding the many gates to the inner-sanctum of Heaven. Angels have free will, are beings of pure reason, and often feel cold and distant when interacting with humans. 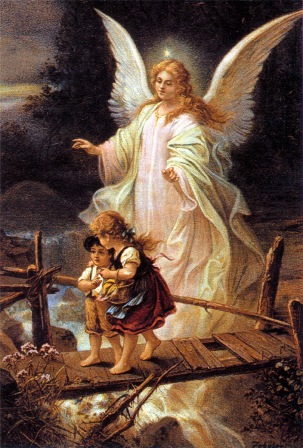 It’s art like this that, while very pretty, feeds boring and bland ideas about angels.

Christianity’s ideas of angels grow out of the Jewish angelic tradition. Angels are still beings of reason with free will. Christians tend to have a more personal view of angels. The Archangel Gabriel speaks directly to the Virgin Mary to ask if she’ll be the mother of Christ. He is patient with her confusion about how that’ll happen without sex, and explains it to her. In other circumstances, angels are more likely to wax poetic about how idiotic humans are before considering whether or not to answer their questions. Catholicism believes that a guardian angel is assigned to every human at birth, and encourages people to pray for their guardian angel’s help. The Christian artistic tradition gave us angels as beautiful, kindly humanoid beings. 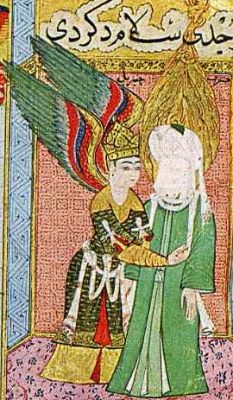 On the other hand, Islam’s concept of angels is a bit different. Angels in Islam have no free will, and only do what God orders them to do. Angels are made of light. Unlike medieval Christianity’s rather scientific categorization of nine different choirs (similar to “species”) of angels, many Islamic scholars divide angels into fourteen categories within a divinely-established hierarchy. Like the Judeo-Christian tradition, some angels are named. Jibrail, the parallel to Gabriel is the angel of revelation. Israfil, the parallel to Raphael, will blow his trumpet to signal the end of the world and the beginning of judgement. Mikael, Islam’s version of Michael, is far from the Judeo-Christian warrior. Instead, he’s the angel of mercy and brings rewards to good people in the afterlife. Finally, Azrael is the angel of death, with the task of separating the soul from the body.

There are so many re-imaginings of angels in pop culture that there’s no way I could cover them all. So let’s just start with a few. The first, most obvious candidates are the angels in Supernatural.

We’ve already explored the sexuality of Supernatural’s angels here. While Supernatural does draw from various Christian and Judaic traditions for its angels, as the show progressed, they took on an identity of their own. Supernatural’s angels are famously “wavelengths of celestial intent” in their true forms, which are “the size of one of your Chrysler Buildings” (though that last bit might have been Castiel just showing off). They’re genderless beings, but seem to fit best in vessels that share common characteristics to their true vessels. Sam is Lucifer’s vessel, Dean is Michael’s vessel, Anna chose a female vessel, and Raphael has both male and female vessels, but they’re always Black. Angels are generally power-hungry jerks carrying awesome blades that look like the point of a long throwing spear. When they get their powerful grace-juices flowing, they shine brightly and you can see the shadow of their massive wings. Angels still seem to be separately created beings, not human, while demons are just corrupted angels and humans.

Charmed, another television show, uses angels. Sure, they’re called Whitelighters, but no one’s fooled here. When Phoebe asks Leo what, exactly, Whitelighters are, he responds, “Well, we’re really just messengers. Guides. Think of us as guardian angels for good witches.” Right. The name “Whitelighters” could also be a reference to Islam’s angels, being made of light. Whitelighters are formerly good humans who choose to become Whitelighters after death. They have their own language, similar to Enochian in Supernatural. Whitelighter-human sexual relations are generally frowned upon, but provide great plot material. Whitelighters are also pacifists, but will help their witches vanquish demons. They have all sorts of powers: teleportation, immortality, scrying, healing, shapeshifting, cloaking, and telekinesis being just some of them. What’s most interesting about the existence of Whitelighters in Charmed is that, traditionally, witches are thought to conduct their dealing with the help of demons. This show flips that trope on its head, and provides us with three-dimensional characters in the process. 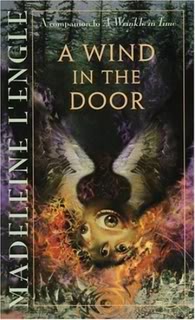 In Madeline L’Engle’s A Wind in the Door, we find a physically traditional angelic depiction with a more modern personality. Proginoskes is a cherubim, a member of the second highest of the nine “choirs” of angels, and looks far different from the adorable baby “cherubs”. Charles Wallace first mistakenly identifies Proginoskes as a ball of dragons. Instead, we soon discover that the cherubim is really a ball of eyes and wings. This is the traditional ancient Jewish understanding of what a cherubim looks like. Proginoskes makes explicit reference to the choirs of angels, and how lofty his own position is. He has a far more human personality than the traditional cold and detached cherubim. He whines, complains, and resents being saddled with a human partner for a series of tasks which determine the outcome of the universal battle between the forces of good and the forces of darkness and evil, the Echthroi. Here we see clear, intentional reference to medieval Christianity’s choirs of angels, combined with Judaism’s vision of what the cherubim look like. 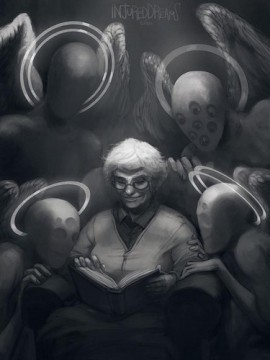 Most excellent fan art by injureddreams.tumblr.com.

A more curious re-imagining of angels comes from the popular Welcome to Night Vale podcast. As with many of its other characters, WTNV fails to give us a true physical description of the angels, other than to mention that one of them is Black. The angels may or may not exist (according to the secretive and paranoid City Council), but definitely speak to Old Woman Josie. The angels perform all sorts of household chores for her, shopping, gossiping, and occasionally giving her warnings about impending doom. The angels granted Josie protection against the “Creeping Fear” in one episode. In the pilot, our narrator Cecil reminds his audience that no one should know anything about the angels, and that the City Council says that “the angelic organizational chart is privileged information.” We see that angels do someone’s bidding, deliver important messages, and offer protection—the three major functions of angels in all three Abrahamic religions. The rest of who these Night Vale angels are is thus far left up to mystery and imagination.

As we see, these are just four of the many, many re-imaginings of angels in pop culture. While it might be nice to think of angels as beautiful women or androgynous men with long, flowing hair playing harps on clouds, there are so many better depictions out there trying to influence our culture’s understanding of angels. Many religious people are ignorant of their own tradition’s conception of angels, so much so that most Americans tend to have a rather homogeneous, bland idea of what angels are. And there’s no real excuse for it. Angels can be powerful, sexual, gendered or gender-less, human-like or super-human, look like humans or look nothing like humans. We shouldn’t have to be content with accepting such a bland standard understanding of angels when plenty of better ones already exist in both our religious traditions and in our pop culture.