I love it when games release content for the holidays, and when the heads behind Borderlands 2 announced the release of a Halloween-themed DLC, I knew I had to get it. Even though Halloween proper is still a week off, I snapped it up on its release date back on Tuesday. 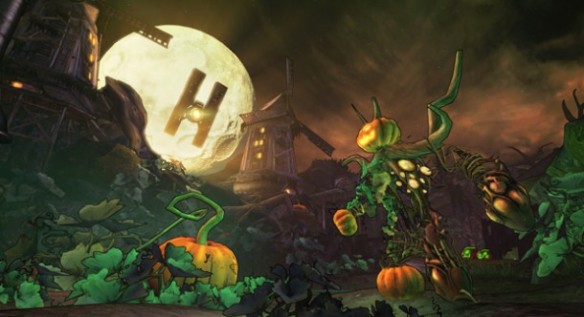 I know I didn’t review the Tiny Tina DLC. I’m getting to it.

In addition to being something special for this time of year, T.K. Baha’s Bloody Harvest also gives way to a new type of DLC: head hunts. As the name implies, the goal of the quest line is to eventually win a special head—it’s what it sounds like: a facial customization for your character that changes most, if not all, parts of the head. Whereas I will agree that releasing so many ‘pay-to-get’ DLC customization options is a bit money grubbing—there have been fifteen in total—what I like about the head hunts is that it gives you an entirely new environment to run around in and new enemies to fend off. At least that’s what it seems like given the contents of this DLC. The question is: is it worth the three dollars? Spoilers under the cut.

For all the fans of the first Borderlands game, T.K. Baha is one of the characters that has always remained in our hearts. Even more so in the sequel, when players find out that the genial blind man lost everything upon his relocation to Pandora: his wife, his sight, and his leg. Despite all this, he remains an upbeat and friendly soul until he follows the path fate seems to have set out for him and gets murdered by bandits. We run into him once more during the DLC The Zombie Island of Doctor Ned for the first game where it turns out T.K. is now a zombie. And is obsessed with brains as any good zombie is wont to do. That’s where we start the tale of the bloody harvest.

T.K. is now the lookout for some sort of zombie retirement home and one thing in particular has got a bee in his bonnet: the jackass known as the Pumpkin Kingpin. Of course, you’re sent to kill him. What could have been a simple “run to this place and kill the boss” quest has instead been made into an actual quest line. You don’t just go on your way and spill pumpkin juice; you have to fend off magical skeletons, create a skeleton key, and travel the length of this zombie abode in search of ways to draw out this kingpin.

To be completely frank, Bloody Harvest has much more content than I was expecting for three dollars. Although the quest isn’t anything to write home about—it’s fun, but not amazing—the environment is extremely impressive. It’s crisp, clean, and surprisingly spooky. Additionally, the map has a ton of Easter eggs that horror enthusiasts would get a kick out of. I wasn’t particularly looking for them, but I did run across one room covered in paintings whose eyes followed you as you walked by, and a static-y television that briefly showed the head of a psycho à la The Ring.

Creators have also implemented a new gameplay mechanic specialized for this map in particular. Sometimes upon the defeat of an enemy or the destruction of one of the many pumpkins hanging around, the player can find stat-boosting candy. Players can increase their attack, defense, heal rate, and speed, and there’s a cute little poem in the item description. And let me tell you, the speed candies saved my butt more than once. Despite the quest being so simple, it’s easy to see that a lot of love was put into the map itself and the inclusion of T.K. Baha.

Honestly, the worth of this DLC depends on your play style. I love collecting heads and Halloween, so it was a no-brainer for me (pun not intended). Bloody Harvest certainly isn’t breaking any new ground, but if you like the nostalgia factor of seeing a familiar face and exploring new areas, I’d say that putting up three bucks isn’t going to burn a hole in your wallet.