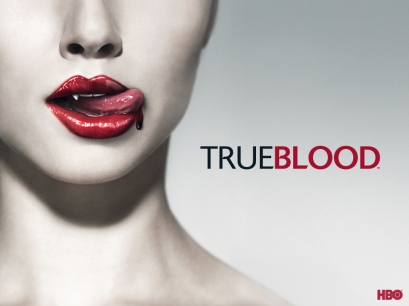 Out of the blue, I decided to watch True Blood. I hadn’t been too keen on getting into it for certain reasons, but I finally figured what the hell? Let’s give it a shot. For those not familiar, True Blood is a series produced by HBO that premiered back in 2008, so it’s been around for a couple years already. Based on The Southern Vampire Mysteries series, also known as The Sookie Stackhouse Novels, True Blood follows a young, telepathic woman named Sookie Stackhouse, a waitress at a bar down in Louisiana.

In the True Blood universe, vampires have “come out of the coffin” and revealed themselves to humans. Two years prior to the start of the series, a Japanese company developed a synthetic blood called True Blood that satisfies all the nutritional requirements vampires need. This prompted both the reveal of and a huge political war between people who are opposed to vampires and those who want to give them equal rights as citizens. Not known to the public, however, vampires have their own system of government, and many of them do not wish to go “mainstream” by drinking True Blood.

Our story starts with Sookie at the bar, waiting on customers. This job, which requires interaction with numerous people, is difficult on her, due to her telepathic abilities and always having to concentrate in order to not hear what other people are thinking. In comes vampire Bill, looking for a bottle of True Blood. Intrigued by Bill, and excited to actually be seeing a real vampire, Sookie hurries to wait on him. Over the course of the first episode, she discovers that she cannot read his mind, and the two of them start to form a relationship.

Essentially, it’s like Twilight in reverse, only with plot and character development. And it’s possible to enjoy without feeling guilty. Weird, I know. 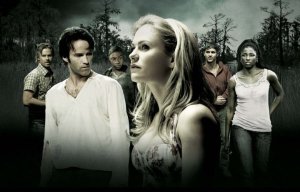 Also, everyone is an adult, so there are no creepy pedophilic relationships.

I went into this series knowing absolutely nothing other than what’s in the above link. I did not know that this show was going to be filled with fake southern accents, a sound that I really hate to hear coming from human mouths, nor was I expecting redneck vampires. I got used to the accent thing really quickly, and I fell in love with the setting. It’s not what typically comes to mind when people think about vampire lore. So I found that very unique, and I think it gives the story a lot of character. Additionally, the story takes place in a small bumfuck town, the fictional Bon Temps, out in the middle of nowhere with only one bar around. This creates a nice sense of community, with lots of reoccurring characters that make the setting all the more real. Due to the area, there’s a lot of religious influence as well, and the story delves into both good and bad portrayals of Christianity. One of the first things to really hit me about where the story takes place and the overall atmosphere it has is the opening theme song. Take a listen for yourself:

I fell in love with this opening in no time. I really like how the opening takes a lot of seemingly innocuous things and makes them seem really creepy—like the little boy eating—or how it’s otherwise just plain morbid. It’s just perfect for the show. Unfortunately, like all HBO shows that I’m familiar with—there’s only two, this and Game of Thrones—True Blood can become very gruesome very quickly. It also likes to have a lot of pointless, intrusive sex scenes.

I also assume that this one, like all of the others, just wouldn’t have been the same had she been wearing a bra.

Regardless of that, I think I like True Blood because it’s everything that Twilight should have been. I have always lamented that I didn’t like Twilight, if only because it has a huge fanbase with plenty of fanfiction. True Blood fills that hole in my life and more.

The plot of the first season is rather slow going, however. It revolves around a string of women being murdered. The women don’t have much in common, except that they are all “Fangbangers”, people who have sex with vampires and like to be bitten. The murderer, we discover, is a human named Drew who doesn’t like Fangbangers. Two years ago, when vampires first came out, Drew’s sister dated one, and he murdered her for it, then moved to Bon Temps and changed his identity. Naturally, after killing two more female Fangbangers—both of whom Sookie knew, one from highschool and another from work—he starts focusing on Sookie herself. In the process, he kills her grandmother, and then later torments her by decapitating her pet cat. In the season finale, Sookie and Drew face off. Both Bill and Sam—Sookie’s boss, who is another supernatural creature, a shapeshifter—come to her rescue. Though Sam provides some much needed help, in the end she saves herself. That’s just the one thing I love about this show, and there are many.

For starters, Sookie, unlike Bella, is a complete human being who is not only capable of looking after herself, but she also doesn’t just accept her boyfriend’s misogynistic attitude, like his stalking. When’s she angry at Bill—or even Sam, who also likes her—she doesn’t put up with their bullshit. All the danger that comes with dating a vampire wears down on her, and it bothers her that she might be killed for it. She’ll flat out tell Bill that he needs to leave her alone after certain incidents, such as when Bill torments a police officer and holds a gun to his head. Sookie is concerned that Bill would have killed—shot or bitten—the man had she not been present. Additionally, whenever she’s having problems with Bill, Sam will often try to assert himself on her, through clearly unwanted flirting and stalking, and Sookie never gives in to that.

I often hear people complain that Twilight would have been much better had Bella distrusted Edward and he had to prove to her that vampires didn’t have to be dangerous. That is something that actually happens here in True Blood—some of the vampires want to go mainstream and live in harmony with the humans, while others don’t want to have to change their ways. However, even mainstreaming vampires like Bill prove to be quite dangerous, making the relationship between him and Sookie a little shaky. They fight a lot and they have to work through their issues. A big issue is that Bill is very old fashioned and harbors a lot of misogynistic ideals, such as wanting to protect her even when she doesn’t want him around. It’s quite a relief that she doesn’t stand for this and she doesn’t just write off his stalker-ish and controlling behavior as just his way of showing that he loves her.

Sookie’s relationship with Bill is also further strained by the negative views some people—specifically Christians—have regarding vampires. They say God is light, and Satan is darkness. Vampires are creatures of darkness, unable to stand the light, and are therefore evil. These people don’t take into account that most vampires, like Bill, did not choose to be what they are. A lot of people in Bon Temps don’t like the thought of a good Christian girl like Sookie falling in with vampires. Often times, characters will claim that Fangbangers will burn in hell.

The main voice against vampire rights is a Christian Church group called the Fellowship of the Sun. They don’t play a very big role until the second season, so I don’t want to get into them too much here, but they and other people tend to have a very bigoted and conservative mindset when it comes to morality and the Bible. 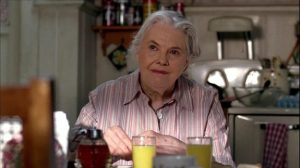 Counteracting these characters are people like Sookie and her grandmother, Adele Stackhouse. Sookie will actively state that she doesn’t think God will damn vampires to hell just for being different. However, I think Adele is the best Christian representation in the whole season. She never judges people for being different. She looks after those who need her help. When she learns that Bill is a vampire, she’s not put off by him, but instead interested in his experiences. She actively encourages Sookie’s relationship with him, and when Sookie and Bill have problems, it never occurs to Adele that those problems are because he’s a vampire. Adele welcomes people into her home regardless of who they are.

Adele’s death is something that hits all the characters hard. The music in the scene afterward when Sookie breaks down mourning at her kitchen table really illustrates the kind of person Adele is and the relationship the two of them had with each other. It also helps to further show Adele’s and Sookie’s relationship with God. The background music isn’t just mournful. It’s a Christian song about going home, because God is supposed to comfort, which is a belief both these women hold onto dearly.

However, as I said, since The Fellowship of the Sun doesn’t really play a major role until the second season, I’ll probably get into Christianity more when I review that. Other than religion, there are a lot of other issues going in the first season of True Blood, but this post is long enough as it is. I’ll check back with you guys in a couple days for Part 2.