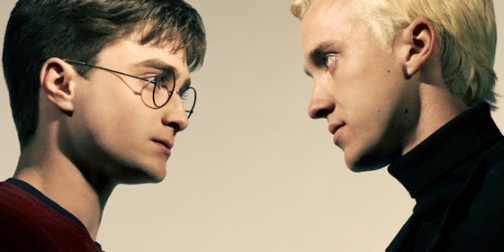 If it exists, there’s porn of it—no exceptions. That’s actually a rule of the internet. But most often, when we talk about fanfiction, we’re talking about a relationship between two guys. This is commonly known as “slash” (accordingly, a relationship between two girls is “femslash”, etc). It’s hard to explain this phenomenon to those outside fandom: the usual explanation runs something along the lines of, “Well, there are a lot of straight girls in fandom, and they like reading about two guys together… what?” I’ve used that explanation myself when trying to explain to my brother why, upon ascending to the internet, Harry Potter and Draco Malfoy can no longer keep their hands off each other. (To be fair, it was a much better explanation than the first one that popped into my head, which ran something along the lines of, “Because… shh”.) Now, however, there’s some legit data on the inner workings of fandom, and it means we might do well to rethink the assumptions that lead to this explanation. 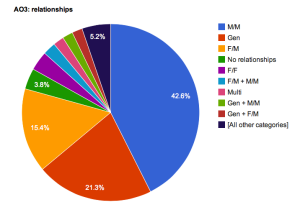 Slash’s reign as king of the internet was pretty much verified after The Daily Dot challenged someone to actually count the number of fanfics for every pairing on AO3, an extremely popular fanfiction archive. Tumblr user destinationtoast did all that and more, proving that the top ten AO3 ships were all slash and that Sherlock Holmes/John Watson far outpaced both Supernatural’s Destiel and Teen Wolf’s Sterek. They then went on to prove that M/M was the largest category on AO3, double the size of its closest competing category, Gen (fics which do not center around relationships).

To see why slash rules the internet, however, one would need to turn to the actual producers (fanfic authors and artists) who use AO3. Tumblr user centrumlumina did just that with a survey of 10,005 AO3 users. The general assumption, as we know, is that the average slash fan is a heterosexual female fan. However, centrumlumina’s results suggest that perhaps the combination of “heterosexual” and “female” ought to be questioned. About 90% of survey respondents were fans of M/M, but only 30% identified as both female and heterosexual. (If you’re confused, consider that respondents could check as many boxes as they felt represented them—i.e., both female and transgender under “gender”, both heterosexual and pansexual under “sexuality”. For this 30% figure, centrumlumina counted only the respondents who chose only female under gender and only heterosexual under sexuality.) Indeed, while most respondents were female, the majority of respondents were QUILTBAG-identifying people.

There are, of course, some limitations on centrumlumina’s survey, the most important being that there was no way to make it a random sample of users and there may have been some selective bias among those who chose to take the survey, but it does suggest some other directions from which to approach the question of “why is there so much slash fic?” If the majority of fans are female or female-identifying, but not straight, what does that mean for the assumption we started out with? Fortunately, both destinationtoast’s and centrumlumina’s works on the issue have inspired a lot of academic fandom discussion, and we already have some new theories for you.

Looking at destinationtoast’s chart of the most popular ships on AO3, it seems like there’s a sign outside TV Land that reads: White Heterosexual Guys Only! Supernatural stars three white guys, Sherlock stars two white guys, Teen Wolf… well, it ostensibly stars a person of color, but fandom has latched on to two white guys instead. Tell you what, though, let’s leave race in fanfic for another post. Either way, there’s hardly a girl to be seen among the top ten AO3 ships. And if a fanfic author wants to write romance, it’s a little hard to write heterosexual romance when no girls exist in canon, isn’t it?

Even when there are ladies in canon, they often aren’t given what fans consider “shippable” relationships. As centrumlumina points out, people tend to ship characters who are close friends or characters who are rivals—in a world where most media rarely, if ever, passes the Bechdel test, it’s unique enough to see one female character, let alone two who are rivals or friends. When a woman does exist, her “other half” is a guy—think Mulder and Scully, Abbie and Ichabod, Sherlock and Joan. (This also goes a long way toward explaining the relative dearth of femslash in fandom: another topic I will leave for another post.) (ETA: I have written this post! It can be found here.)

Putting aside the problems of the various source materials, some women read slash simply because they feel uncomfortable identifying with women—especially the women presented in popular television shows, who are overwhelmingly white, skinny, and conventionally attractive. This can mean any number of things, as some actively dislike the gender norms that are associated with being female (worrying about one’s figure, what one eats and how one dresses), and some dislike sex (or have traumas that have led them to be wary of sex). In any case, the characters’ maleness is a buffer between reality and fiction. Many fans read fanfiction as a form of escapism, and male characters don’t have to worry about female gender norms or female participation in sex. As one Tumblr user put it:

Reading M/M is safe for me. I don’t want to identify as the sexual person involved […] Fictional men having sex lets me relax and enjoy because I have no part in it.

This tends to echo other fanfic consumers who don’t read or write heterosexual fics:

As for het ships, I avoid them because I tend to see misogyny and abuse under every bush and around every corner, whether they actually exist within the relationship or not.  I’m too angry to be fair when it comes to male/female interactions.  It’s so much easier when potential gender-related power imbalances are eliminated.

There’s also, I suppose not shockingly, some internalized misogyny involved in the question of “why is there so much slash?” Female characters who are present in canon are often torn down by the fanbase. As Tumblr user Saathi1013 said:

[P]hysicality and gender isn’t the only component of ‘desire’ – there is also empathy and identification, and I see a lot less willingness to empathize and identify with female(-presenting) [and PoC] characters than [white] male(-presenting) ones, even when they share a lot of the same characteristics, both physically AND in personality/background/complexity.  And when I say “empathize with,” here, I mean AT ALL, not just in shipping them or including them in erotica.  I have seen people deride, dismiss, or bash a canonical female love interest as ‘a female version of [male character in popular fanon ship]’ as if the male identity is a trumping factor over the hetship.

Or in other words, fans don’t seem to show as much empathy to female characters, especially when that female character poses a “threat” to a fanon ship. Sherlock’s Molly is “useless”; Supernatural’s Lisa “has no personality”; and like Saathi1013 said, when Teen Wolf introduced Cora Hale, the fans reared up with the almighty battlecry STOP GIVING US THE STRAIGHT VERSION OF STEREK! (The capslock, was, I suppose, necessary to gauge the exact depth of their outrage.) Though there’s no concrete evidence for it, it’s not hard to draw a line connecting this subconscious attitude to the glut of white male slash. Many fans defend their slash ships by saying, “Well, there are no good female characters in canon,” which seems to mean that there’s some elusive quality lacking from the few female characters who exist; if so, I would ask why Arthur/Eames, an overwhelmingly popular ship from Inception, has so much fic devoted to it when Eames, at least, is a very, very minor character. One might as well ship Arthur and Ariadne, for all the

screentime that Eames gets, but empathy for and identification with Ariadne seems to be, for the most part, missing among the fanbase. (A quick search on AO3 turns up almost twice as many Arthur/Eames fics as there are Arthur/Ariadne fics.)

Then, given that 90% of respondents are into slash and 20% of respondents identified as something other than female (whether male, transgender, genderqueer, or otherwise), it seems natural to assume that some of that 90% are not female. Male or male-identifying voices are often drowned out in fandom simply due to the sheer volume of female and female-identifying voices, but their input on this issue would be incredibly useful. Do queer men read or write slash for representation that they wouldn’t normally find in mainstream media? When straight men read or write slash, why do they do it and what are they getting out of it? What about trans fans and fans who don’t identify as part of the gender binary? 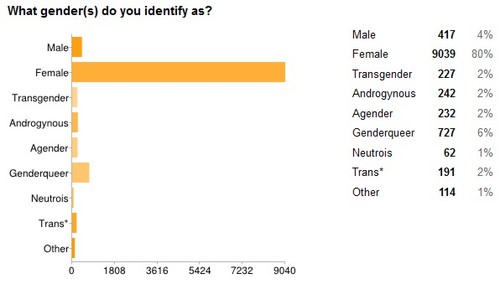 On the matter of representation, as the majority of fanfic authors identify as queer, it’s worth noting that queer women, as well as queer men, might write slash fanfic for representation despite not being men themselves. This can be both bad and good—on the one hand, slash fanfic lends a voice to a queer experience that isn’t often found in any media; on the other hand, queer women’s writing of slash fanfic has also led to claims that voices of queer men are being smothered by an overwhelming amount of queer women who might not note inaccuracies in sex between two men, as well as claims that slash is being heterosexualized (one partner tends to take the gendered “male” role, and the other takes the gendered “female” role). Whatever your interpretation of the matter, representation is also a valid reason we have to take into account when asking why so many authors choose to write slash.

While some fans do read slash because they find it erotically compelling, there’s enough evidence here to suggest that there’s a lot more to this issue than just “hey, horny straight girls like gay guys!”. For one, they’re not all straight, and for another, they’re not all girls. Authors of every stripe might write slash because they’re emotionally, not erotically, invested in the relationship. They might write it because there actually are no female characters in the source material, they might write it because they don’t want to identify physically with the characters in the story, they might have internalized society’s underlying misogynistic messages, or they might be queer and want what queer representation they can obtain from fanfic. If there’s something we can take from these AO3 surveys, it’s that more questions need to be asked about why fanfic authors write what they write, and why fanfic consumers read what they read. The answer isn’t as simple as we commonly assume.

For more information/discussion on this topic, please take a look at:

destinationtoast’s complete list of statistics and original response to The Daily Dot
centrumlumina’s complete census, specific analysis of heterosexual female slash fans, and further data analysis
A similar analysis of another popular fanfic website, FanFiction.net, although it doesn’t include sexuality as a mode of analysis
melannen’s collection of various fandom demographic polls

(And, if you’d prefer not to be quoted in this article, please let me know and I will remove your quote and name. Thank you.)

48 thoughts on “Why Is There So Much Slash Fic?: Some Analysis of the AO3 Census”