If your supernatural book or TV show has any sort of religious bent, it’s likely that it has dealt with angels and demons in some way. And if your thing has angels and demons in it, it’s pretty much guaranteed that at some point the fallen angels and redeemed demons will come out to play. Pure good and pure evil are pretty boring when you come down to it, because we as humans are neither. We all have good and bad sides, and in order to relate more easily to beings who are totally good or totally evil, writers tend to pull them toward a more shades of grey personality instead.

Although at first it seems like these are very different ends of the scale, making angels fall and making demons repent are both ways to portray a supernatural character as more human. Angels are purely spiritual creatures, dedicated to the Lord, soldiers for God. It’s hard for us as humans to imagine the certainty of purpose that’s built into an angel’s

mentality. When an angel falls, it usually does so because it has come to doubt its purpose or has come to realize something is more important to them than being a soldier. They don’t necessarily fall because of evil desires, although that’s common in a lot of examples of this trope. When an angel defects from Heaven, they usually end up losing their angel powers and become human. The whole plot of Dogma centers around two evil ex-angels trying to get un-fallen (and thereby, because of a loophole in dogma, destroy all creation); City of Angels follows an angel who decides to fall because he’s in love with a human woman.

Supernatural is an interesting exception to this rule: angels who abandon Heaven’s army do not automatically fall. Rather, they get to keep their powers and use them for whatever side they choose until someone activates a spell that kicks all the angels out of Heaven. Even then, they still have most if not all of their powers—they have to lose or abandon their Grace to become fully human.

On the other side of this is the redeemed demon. These characters were originally sinister beings whose roles consisted of temptation and torture of suggestible and damned humans. However, for whatever reason, these evil creatures developed some sort of fondness for humanity, and opted to help humans over their former masters. They may not necessarily be good, but they operate in a much greyer area than their former darker allegiance.

Take Crowley from Good Omens, for example, who still enjoys a good temptation once in a while, but who has, over the years, become too fond of humanity to wish for its total destruction. Supernatural’s Meg started out as downright evil, but by season eight she was (probably) in love with an angel and was helping the main characters fight against the King of Hell. (And given the sometimes-followed, sometimes-not canon of Supernatural that demons used to be human souls, it’s surprising that there aren’t more turncoats who want redemption running around, honestly.)

These are all well and good as far as their individual stories are concerned, but this sort of character is becoming so omnipresent in the genre that it’s devolving into a pretty boring archetype. I’d really like to see a new spin on either of these archetypes. 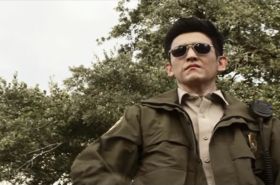 Sleepy Hollow presents an interesting twist on this trope in Andy Brooks, the former police officer who is now a dead servant of the demon Moloch. Although Andy isn’t a demon himself, he’s clearly a supernatural servant of evil. He still wants to help Abbie when he can, but that’s his only impulse to do good, and it’s inspired more by his love of Abbie than his altruism. Even in cases where he wants to be the good guy, he is still susceptible to being controlled by his master and betraying the people he wants to help.

Both of these tropes, as I said, are usually used to humanize the characters in question—it’s hard for people to imagine being perfectly good or perfectly bad, and therefore hard for an audience to empathize with such a character. However, I think that these ideas need to be used in new and interesting ways, as with Andy in Sleepy Hollow, so that they don’t become too trite.