Happy Chanukah (Hanukkah), everyone! Chanukah is the spelling preferred by Jewish traditionalists, but Hanukkah is also fine, because Hebrew is a bit difficult to transliterate into English. The tradition of celebrating Chanukah comes from an event about 2,100 years ago, when, after reclaiming the Temple in Jerusalem, the Jews only found enough holy oil to light the sacred lamp for one day. The oil miraculously lasted eight days, until more oil could be pressed and ritually purified. The festival is about the triumph of light, purity, and spirituality over darkness, compromise, and materialism. To learn more, here’s a rather good website with information about all things Jewish. This year, the eight-day Jewish festival began November 27 and ends on December 5, and in honor of it we’re taking a look at Jewish representation in pop culture.

First, let’s take a look at the old geek standby: comics. Comics, especially in recent years, have done a passable job of at least making an attempt at some real diversity, Judaism included. But how important is Jewishness to some of these Jewish heroes? As with all other aspects of comic diversity, it varies. 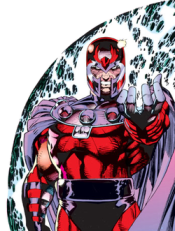 Marvel’s Magneto is most famous for being the primary villain of the X-Men franchise, appearing in X-Men #1. Magneto believes the human race is an “outdated” species and pushes for mutant world domination. Why? Magneto began his life as Max Eisenhardt, a survivor of Auschwitz. Later he changes his name to Erik Lehnsherr, moves to Israel, and meets Charles Xavier (Professor X). Some believe that Magneto parallels Malcolm X, citing experiences of violent discrimination as fuel for both of their more aggressive beliefs (while others aren’t so convinced). While we don’t exactly see Magneto “being” Jewish or participating in Jewish worship, his experiences as a Jew are intrinsic to his character. 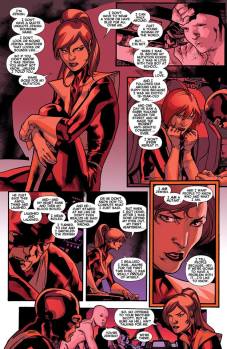 Kitty Pryde is probably the most recognizably Jewish member of the X-Men. Sometimes she’s depicted wearing a Star of David necklace; it’s this necklace that repels Dracula in The Uncanny X-Men #159. In Unlimited X-Men, Kitty performs the Yartzeit for her deceased boyfriend Peter Rasputin, aka “Colossus,” even though the practice is traditionally reserved for spouses and other immediate family members. In All-New X-Men, we see that Kitty understands her faith and her powers in much the same way. She may not have the most Jewish-sounding name or look like a stereotypical Jew, but that doesn’t stop her from incorporating her religion as an integral part of her identity. Similarly, her power of phasing through objects doesn’t require her to wear a visor or have blue skin, but being a mutant is an important part of who she is, all the same. Kitty is a wonderful example of how authentic religious identity creates a more interesting and powerful character. 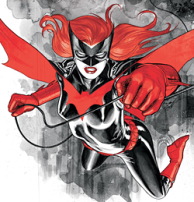 While Batwoman hasn’t always been explicitly Jewish, DC’s latest version of Batwoman is. In an attempt to diversify and relate to a modern audience, DC wrote Batwoman, aka Kate Kane, as a lesbian of Jewish decent. In issue #33 of 52, we see Batwoman celebrate Chanukah with Renee Montoya. Most of the attention paid to Batwoman focuses on her sexuality, not her religion. So while Judaism doesn’t play as much of a role in her character as it does with Kitty or even Magneto, we do see her participating in authentically Jewish activities. 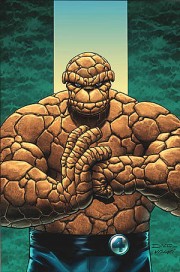 Marvel’s Benjamin Jacob “Ben” Grimm, aka The Thing, combines Jewish identity with authentic Jewish celebrations. Thing’s religion was not “revealed” until about forty years after he first appeared, in the 2002 Fantastic Four, vol. 3. In this story, The Thing recites the Kaddish over the dying Mr. Sheckerberg, and agrees to celebrate his Bar Mitzvah again, as it has been thirteen years since he began his new life as The Thing. Unlike many other mutants with scientific or magical explanations for their superpowers, Thing was supposedly brought back to life by the hand of God.

While comics do a passable job of including Jewish characters, television is a different story. Instead of providing us with authentically Jewish characters, we’re stuck with ambiguously Jewish characters. Supernatural’s Season 8 episode “Everybody Hates Hitler” introduces Aaron Bass and his golem, takes us on a journey of character development and cultural appreciation, and leaves us with Aaron vowing to continue the work of his grandfather. Then… we never hear from him again.

Furthermore, we find a pretty typical example of ambiguously Jewish characters in The Big Bang Theory. Howard Wolowitz is a cultural Jew, complete with overbearing mother and yiddish-isms, but we never see him participating in any Jewish festivals or worship. He makes jokes about hypocritically eating pork while Raj, the Hindu, routinely eats beef. On the surface, it seems like the show’s writers tried to use religion as a diversifying factor, but whether it be Howard’s Judaism, Raj’s Hinduism, or Bernadette’s Catholicism, religion functions like a cultural punchline. Howard Wolowitz is a self-hating Jew, perpetuating an old, unhelpful stereotype.

So why does television have a hard time giving us authentically Jewish characters? There’s the old joke that “the Jews run the media,” but in reality, many Jews have and continue to work in entertainment media. Irving Berlin, one of the most famous American songwriters of all time, was a practicing Jew. Many people argue that there are clear Jewish influences in Doctor Who, beginning with Sydney Newman, show creator and a man of Jewish descent. I don’t think the problem is necessarily one of getting more Jewish writers on board, although that would certainly help. I believe the problem instead lies with what kinds of media people, from studio executives on down, believe will be successful. While Berlin was Jewish, some of his most famous songs are “White Christmas” and “Easter Parade” for movies celebrating two important Christian holidays. For a long time, the media which sold was media which catered to a very white, Anglo-Saxon Protestant demographic.

Comics, on the other hand, are traditionally understood to be directed at a rather niche audience. Regardless of whether or not that audience has become more mainstream in recent years, the association remains. Comics were never really meant to be consumed by the masses. Furthermore, while television tends towards more mainstream genres, comics often include science fiction stories. Science fiction has always been about experimental ideas and pushing the boundaries of what we consider normal. So it makes sense that comics would succeed in including a wide variety of characters and minority representation. Because when you start throwing superpowers into the mix, including a different religion (or race or sexuality) doesn’t seem so bizarre. Audiences today crave more diversity in their entertainment. If we could create more authentically Jewish characters, we could show the wide variety of expressions that actually comprise Judaism today, from Orthodox to Reformed. At the end of the day, this will create more interesting, engaging characters.