This was followed by:

And while I’m pleased that a character who is extremely masculine and beloved by dudebros the world over is not actually heterosexual, as a pansexual woman I’m a bit annoyed.

I’m not sure if omnisexual necessarily means the same as pansexual. I have seen some people in the pansexual community use the terms interchangeably and others outright deny that pansexuality and omnisexuality are similar. I don’t know how I feel about any of that, but it is an issue. Whatever the case, many people on Tumblr are now cheering at the idea of a pansexual Deadpool.

What really bothers me is what seems to be the defining characteristics of pansexual characters: sexual promiscuity and being really weird. There is never a nice, quiet girl in a committed relationship who also identifies as pansexual. No, instead it seems that most pansexual characters end up written as sexual deviants.

Other than Deadpool, very few characters are identified as being pansexual. I have heard there are maybe two other pansexual characters in comics, but I don’t know anything about them, admittedly. Regardless, they are definitely not as well known as a character like Deadpool, so I don’t feel comfortable trying to address their portrayal.

What I will discuss is the only two other characters I know to have been viewed as, if not explicitly stated to be, pansexual. I will not include Captain Jack Harkness in this because the general consensus of The Powers That Be is that he is bisexual, despite what fans may think. Honestly, even if I included Jack Harkness in this, I feel he would have many of the same problems as any other character labelled pansexual.

First, there is The Todd, from Scrubs, who is generally portrayed as a dumb jock surgeon who objectifies and harasses women. As the show progresses it’s revealed that The Todd is not just into the ladies, and eventually starts to openly objectify and harass the men at Sacred Heart Hospital just like the women (though he notably still harasses men less, because I guess harassing them equally would be too weird). At first, the ladies at the hospital think The Todd is a closeted homosexual, but when it’s revealed he still likes women, people are confused (because I guess bisexuals don’t exist at the hospital). The show further illustrates that The Todd doesn’t really discriminate when it comes to attraction and seems to want to have sex with everyone, even if they aren’t stereotypically attractive. Eventually The Todd explains, “The Todd appreciates hot regardless of gender.” The Todd eventually ends up in a polyamorous bisexual relationship, which would be cool if it weren’t supposed to further show how The Todd is a sexual deviant, an already established fact about the character. He insists that everyone who comes to his apartment wear a banana hammock, and in one notable episode has sex with a female-shaped piñata. All this combined shows that The Todd is a creepy hyper-sexual deviant—and he’s pansexual.

Despite people saying The Todd is pansexual, Scrubs never really uses the term, but another TV show has. 30 Rock is a fun and often mildly nerdy sitcom about an SNL-like show. In it, one of the fake show’s stars, Jenna Maroney, is a narcissist who starts dating Paul L’astname, a cross dresser who often impersonates Jenna. Jenna realizes that by dating Paul she can date herself, so the two hook up and eventually get married. Paul may actually be the first openly pansexual character on TV. He never defines himself, but Jenna states that Paul is a “gender dysmorphic bi-genitalia pansexual.” Jenna and Paul confess that they hate anything normal and often engage in unusual fetishes likes having a dwarf sit on them, and Paul even walks Jenna when she is dressed like a dog. I don’t think I can describe how odd these two really are, so just watch their wedding scene:

In some ways Paul breaks the pansexual stereotype by being in a committed relationship instead of attempting to sleep with everyone, but he is still hypersexual and nothing about his sexuality is portrayed as normal. The whole point of the relationship between the two is to show how weird, creepy, and obsessive they both are. I’m not going to lie, I find 30 Rock and these characters hilarious, but it irks me that the first openly pansexual character on 30 Rock is portrayed this way.

And now we have Deadpool, who is described as pansexual or omnisexual solely on the basis that he is “ready and willing to do anything with a pulse.” Deadpool was already hypersexual; now he’s just another hypersexual pansexual, because that’s how all pansexuals are, right? We just want to fuck everyone, usually in ways that are odd and unconventional even to the most seasoned fetish-exploring vet. I can at least say this for Deadpool: his weirdness is not just tied to his sexuality. Unlike the other two characters I listed, Deadpool at least makes strides by not having a personality solely defined by having a “weird” sexuality. But I do take offense to the idea that Deadpool is pansexual because he wants to fuck everyone. Perhaps this could be a great move for the character—I know a lot of people have been wanting to see Deadpool as a bisexual or pansexual character for a while now, and with a decent writer this could be a great thing to explore, but right now I’m not very hopeful that Deadpool will be much more than another stereotype. 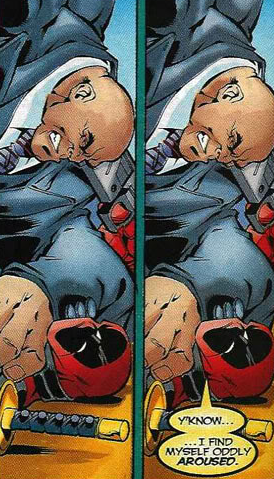 14 thoughts on “Deadpool Is Pansexual, But I’m Not Excited About It”