I’ve been reading fanfic for a long time—like more than half of my actual life-span, yikes—and when you read anything for that long you develop preferences for your favorite kinds of stories. Quite possibly my absolute favorite trope in the whole wide world is the fake-married trope. This trope usually appears when a pair need to convince a third party that they’re married and totally in love, whether it’s a side-effect of going undercover or for other reasons. It generally involves two people who, in the story, already have romantic feelings for each other, but don’t realize they’re requited. They settle into the routine of pretend marriage far too easily, and the drama comes when they realize that they don’t want to stop pretending. I adore this plot in all its forms and fandoms, but it’s also refreshing to see someone put a new twist on an old trope.

That’s where A Lopsided Symmetry of Sin and Virtue, an Elementary fanfic, comes in.

Joan thinks she should be less surprised by his sudden, “Watson, we’re getting married!” and yet, here she is, cooking her egg and trying not to be astonished.

Despite my love for the trope, I was uncertain about it in this particular fandom. The platonic relationship between Joan and Sherlock is nearly sacrosanct to me—I cling to it as one of the very few male-female friendships on TV that has never dealt with a will-they-or-won’t-they buildup. But I gave it a chance on a whim, and I was glad I did.

In every picture I can find that includes both of them, they are judgmentally staring at something out of shot. Idk.

A Lopsided Symmetry of Sin and Virtue is set after Joan decides to give up sober companion-ing in order to be a consulting detective with Sherlock full time. It follows Joan and Sherlock as they go undercover as fake couple Mr. and Dr. Dawson in order to investigate a suspicious adoption agency. Along the way they find out as much about themselves as they do about their suspects. 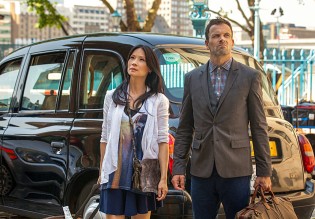 Because the actual series has such a focus on their friendship, I was initially concerned that a fake marriage fic would follow the usual ‘secretly they love each other’ pattern. I was happy to see that this fic took a very different tack. Instead, author language_escapes chose to explore what would happen in a fake-married situation where the participants did start out as friends. What boundaries would they (or could they) maintain, especially if they were being monitored? How do they negotiate the different behaviors that come naturally to a married couple but would be unthinkable amongst friends? Although their relationship does become romantic, and it does turn out, per the trope, that Sherlock did have romantic feelings for Joan all along, our POV character is Joan, and so we get to experience all the nuances of her exploring her feelings throughout the story.

A Lopsided Symmetry of Sin and Virtue is up on AO3 and clocks in around 25k—check it out here.