The second season of True Blood has left me with a lot of mixed feelings. I really liked the Maryann plot, while loathing the Fellowship subplot. Sam’s character even started to grow on me for a little bit, and I no longer completely detest Jason either. However, my opinion of Eric dropped dramatically this season, and Bill kind of bores me. But my feelings are most torn on Tara’s and Egg’s relationship with Maryann and how she manipulates them.

Once again, there are spoilers ahead.

Tara still remains one of the more interesting characters on the show. She’s really smart, having educated herself, and really responsible, something she learned to be while growing up with an abusive mother who neglected to take care of her. But also due to her upbringing, Tara does not handle emotional distress all too well, and that makes it easy for Maryann to manipulate her. Maryann even goes so far as to further the wedge between Tara and her mother, Lettie Mae. She tells Lettie Mae off in front of Tara for not paying Tara’s bail and saying that she had never had the opportunity to meet someone so devoid of human compassion. Later on, Maryann also hides a present Lettie Mae bought for Tara’s birthday before Tara can see it. Potentially due to Tara’s abandonment issues, Maryann is able to assert herself in Tara’s life, and Tara in turn is all but blind to the danger Maryann imposes because she just likes having a mother figure who is actually motherly. 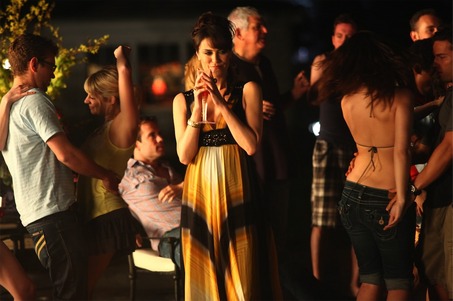 That, and Maryann has crazy mind control powers.

I think the same thing also happened to Eggs, though his character is nowhere near as well explored as Tara’s. Regardless, even though we don’t know that much about Eggs’s past, we do learn some things about him. Like Tara, we can still see why staying with Maryann is something he would be willing to do and why he might also be all but blinded to the toxicity of their relationship to her.

This is one of the things that made Maryann’s plot so powerful. She might be a dangerous Maenad who’s using and manipulating the characters, but at the same time, she goes out of her way to make those characters care about her and form an emotional connection and dependency on her. Unfortunately, this is also one of the reasons that Maryann’s plot can get a little uncomfortable.

Also, I want to remind everyone that Maryann fed them Daphne’s heart.

Tara jokingly asks Eggs at one point if Maryann—the rich white woman—has made a hobby of taking in underprivileged people of color. At this point in time, while the audience may suspect Maryann is evil and not to be trusted, especially since everything about her screams “too good to be true”, it’s not really definite. Maryann does come across as a rich white woman saving a bunch of PoCs in the beginning. It is not fair to say that white people should never do charity work for people who are not as privileged as they are, but shows and movies should not represent these same people as saviors. True Blood does not represent Maryann as a savior, and for that I’m grateful. Maryann is the exact opposite of a savior, so in some ways True Blood actively fights against this trope by initially showing her as someone Tara and Eggs can depend upon and by making them think they need her when they have other people they could go to for support. Then she turns into the villain. However, we could still read this as a rich white woman who purposefully screws around with two black characters. At the end of the season, Eggs is so messed up from what Maryann does that he ends up holding a knife to Andy, and Jason shoots Eggs in the head because he’s worried Andy’s about to be killed.

So the Maryann, Tara, and Eggs situation has both good and bad qualities to it. You can take from their scenes what you will. Though I am aware of the potential racial undertones, I don’t read too much into them. However, I am white and don’t experience negativity based on my ethnicity on a day-to-day basis in the media. What I can say about this issue is that Tara—not so much Eggs—is more than Maryann’s victim.

A rare moment in which they work together.

Yes, the previous season ended up with Tara hitting rock bottom, so it’s understandable that she’s in her current predicament. However, this season, through the Maryann storyline, continues to further build up Tara’s relationship with her mother. Lettie Mae and Lafayette, despite their dislike for each other, team up together to get Tara away from Maryann. After Sookie and Bill break the mind control spell Maryann has on Tara, she and Lettie Mae do have a much needed conversation about their relationship. Additionally, despite everything she just went through, Tara still has the strength to go back to rescue Eggs from Maryann, and in a somewhat touching moment, she gets Lettie Mae to help her. I really liked Tara’s relationship with her mother this season. They still have a lot of ups and downs, but both characters are growing.

That said, Eggs came off as a rather flat character to me who ended up as nothing more than Maryann’s victim. Since he also dies in the season finale, I don’t expect we’ll ever learn that much more about his character. Through Egg’s victimization and even through Lafayette, the show delves into PTSD, which we’ll discuss next time, since this post is long enough as it is. Until then.