Imagine, if you will, the following: Tom Hiddleston killing it. Hard, right? Not simply being pretty good, or reasonably impressive, but really killing it. And not just killing it, but killing everyone. Hiddles has taken his bit back to London’s West End, where he is currently starring in a production of Shakespeare’s Coriolanus. This underrated revenge tragedy follows a battle-hardened Roman general who, betrayed for his tyrannical leanings, moves to take revenge on the city itself. The production, running at London’s Donmar Warehouse (which is technically in the West End) until February 8, has been widely lauded. 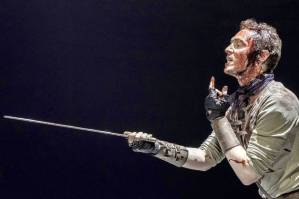 The Telegraph describes Hiddleston’s Coriolanus as a “compelling and persuasive killing machine,” which I think is how everyone thinks of Hiddleston anyway. I’m told there’s much to enjoy, with skillful acting, inventive costume design which combines “Roman robes and Doc Martens boots,” and daring fight-choreography. The reviewer at the Telegraph found the sound design to be irritating but admitted that it was immaterial next to Hiddleston’s portrayal of a charismatic and strategic, yet emotionally stunted murderer which, clearly, is new acting territory for him. If you need a more compelling reason to fly to Heathrow, apparently, after a particular violent scene, Hiddleston “becomes drenched in blood, strips to the waist and has a memorable onstage shower, blood and water running off his body in torrents.” Something to take into account as you make travel plans.

Of course, the man’s talent extends far beyond his physicality. He has a long career in theatre in the U.K., acting in A Streetcar Named Desire, Othello, and Chekhov’s Ivanov before his role as Loki in the Marvel movies. He’s an actor’s actor, working alongside modern greats such as Kenneth Branagh, and it was his work with Branagh on Wallander that led to his part on 2011’s Thor. The theatre, to Hiddleston, is home. Discussing his Coriolanus role with the Evening Standard, he said much that indicates his love for the art and for Shakespeare, like: “Doing Shakespeare on stage makes me feel more alive. The precision of his writing, the complexity of his characters, demands every fibre of my body.” Furthermore, likely knowing that we would read his every word with bated breath, he went to draw a connection between his love of Shakespeare and his love of comics, saying:

“Shakespeare led me to super heroes…The thing that I’ve always been drawn to since I was a child is epic storytelling,” he said. The huge complex characters of Marvel comics had an “epic quality” while “Shakespeare’s tragedies are the definition of epic.”

If nothing else, that’s a pleasant reminder that not only is Tom Hiddleston one of us, but also that he sees comics as connected to some of the highest art in the western world. As someone who is constantly defending the position of comic books as art (which I should never have to do, by the way), I take enthusiastic head-nodding pleasure in hearing them so linked to Shakespeare.