Sleepy Hollow is finally back from hiatus, and tonight we got the penultimate episode of season one. After a few disappointing episodes and a long wait, I wasn’t particularly excited for this episode, but someone out there has been listening to my prayers. Non-spoilery review: this was a really good episode.

Spoilery review after the jump.

First, a recap. After a brief and delightful bit where Ichabod faces his most difficult challenge yet—modern fashion—the attention switches to Captain Irving. He’s obsessing over the demon who threatened Macey when the two of them were out together. And it turns out that he’s right to do so—the demon is hopping from person to person and threatening to come after Macey unless Irving gives it Washington’s Bible. Irving gets Macey to a safe house, but it’s already too late; the demon has been bouncing through the police department’s staff and is possessing Luke Morales, whom Irving brought along to serve as backup at the safe house. 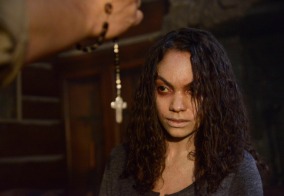 Meanwhile, Abbie and Ichabod search desperately for a way to exorcise or banish the demon and save Macey without giving up their most valuable asset. After some research, they discover that Corbin had encountered someone possessed by this demon before—Jenny Mills. The duo calls Jenny in, and after some soul-searching, sisterly bonding, and… video editing, they figure out how to get rid of the demon: a lantern currently owned by some of Jenny’s old acquaintances.

They drive as fast as they can to steal the lantern and bring it back to Sleepy Hollow, but they’re not quick enough to stop Macey from getting possessed. Demon Macey threatens both her parents, and holds her mom hostage, forcing Irving to head to Corbin’s cabin to get the Bible. Ichabod’s hidden it, however, and the delay gives Jenny, Abbie, and Ichabod time to arrive back on the scene and perform the exorcism. The day, such as it is, is saved, and Washington’s Bible remains in good hands. Tinkering with it later, Ichabod discovers one of the reasons it was so coveted—it contains a secret message from George himself in invisible ink.

Gosh, this episode was freaking scary. I had nearly forgotten that this show had the potential to be terrifying amid all the soap-opera drama of the Ichabod’s son plotline, but this episode reminded me exactly how frightening it can be.

One of my biggest complaints about the last few episodes was that they were so Ichabod-centric that it seemed the writers had forgotten Abbie was also a main character. And while this episode definitely split its focus between the Mills sisters and Macey, Jenny was probably the one who got the most character development.

Yes, no one made Abbie sit in a metaphorical or literal car while the good stuff happened, but she still wasn’t a particularly active character.

Still, I love me some Jenny Mills, so I was excited to see her fleshed out in this episode. We learned a ton about her backstory—for example, the reason she was in jail so often was that she knew the demon that kept possessing her wanted to kill Abbie, and if she was incarcerated she wouldn’t be able to hurt anyone. It was a welcome look into the motivations of a character who has so far been badass but closemouthed, and a sign that Jenny’s starting to open up emotionally again.

This was also an Irving family episode, however, and the acting from the entire Irving family was great. I was especially pleased that the emotional climax of the episode came from Irving—we got a killer monologue from the amazing Orlando Jones and a better look into Frank’s head as well. Hopefully from here on out Macey and her parents will be able to communicate more openly, as both of the ladies (or at least Macey’s

mom; Macey may not remember the possession) are now in on the whole creepy biz. I can’t imagine myself ever complaining about more Macey—especially if it means more interaction between Macey and Jenny.

And on a race representation level, Sleepy Hollow continues to exceed all of the fairly high expectations set by its very first episode. Not only did the finale of this episode feature a token white guy outnumbered by five interesting black characters, four of those characters were women. Macey is also an awesome young lady who is so good at science that she is applying for an advanced study program.  Furthermore, although the demon did kill a few people on its way to Macey, very few of those people were characters of color, named or otherwise. This is a kick in the face both to the dead bro walking trope in general as well as to shows like Supernatural where, if people of color exist, they are usually token characters who end up killed off, either to emphasize the severity of a plotline or to further a (white) main character’s manpain.

Finally, one of my favorite moments in the whole episode came when Irving faced down Demon Macey and tried to appeal to his daughter, locked up inside her own body. He admits that after the car crash he had problems relating to her because he thought that he had to find a way to fix her disability. He continues, saying that he realizes now that she didn’t need to be fixed—his mentality did. It’s still a rare stance for any media media to take these days, and it was very gratifying to hear that, unlike Supernatural and a multitude of other shows, books, comics, movies, and so on, Sleepy Hollow doesn’t believe that people with disabilities need or even want to be ‘fixed’.

All in all, I greatly enjoyed this episode, and my hopes are once again high for the future of the show. Hopefully I’m still this pleased after next week’s two-hour season finale. Till then, readers!