The day before yesterday, I made loud yelling noises at my computer screen because a thing happened. A particular thing. This thing: it turns out that Fox has tapped (pun intended) writer Simon Kinberg to produce a series of films based on the Magic: the Gathering trading card game. Now, if you don’t know Simon Kinberg, you should; he’s written or produced for Guy Ritchie’s Sherlock Holmes, X-Men: First Class, X-Men: Days of Future Past, and other such films. Returning to loud yelling noises, Fox wants to make a “series of films,” creating a Magic: The Gathering cinematic universe.

Kinberg will be working closely with executives at Wizards of the Coast/Hasbro as he begins development. Execs are reportedly looking to “launch a massive franchise on the scale of Harry Potter and The Lord of the Rings.” Those are pretty big shoes to fill, especially considering the performance of previous WOTC ventures. Dungeons & Dragons was a singular kind of awful, from the acting, to the special effects, to the plot. So let’s hope that the MTG film can improve significantly upon that.

Now, the film could be a disaster. But I’m much more interested in the film’s potential to be spectacular, or at least meaningful. CGI and make-up technology has come a long way since Dungeons & Dragons, but The Last Airbender is an object lesson in how that does not a great film make. Magic: The Gathering is set in a world (many worlds, really) of swords and sorcery, with elves, dragons, angels, zombies, enchanted automatons and other mystical entities. Certainly, they will need effects technology to bring these creatures and their powers to the screen in convincing ways (if it’s not animated), but the true potential of an MTG cinematic universe is in the diversity of stories that can be told.

Magic has been around since 1993, with numerous expansions, many of which occur on varying far flung planes, some connected only by the ability of certain gifted individuals to “planeswalk”: that is, to step between planes in the Multiverse. That means that tales could be told on Ravnica, the vast ecumenopolis defined by then-competing guild factions, or on Mirrodin, an artificial world that mixes “metallic and organic” at every level. Given the nature of the Magic Universe, I predict that whatever story the films address will center on these planeswalkers, using their abilities to facilitate epic journeys which cross time and space.

I could even be so bold at this stage to hope for a female protagonist. MTG has no lack of stories with compelling female characters. Take Jaya Ballard, the street thief turned mercenary pyromancer turned hero, or her spiritual successor, Chandra Nalaar. Or take Nissa Revane, the powerful elven mage who seeks to save her world from world-eating titans known as the Eldrazi. Or Elspeth Tirel. Or Glissa Sunseeker. Any of their stories could make a compelling film, and each of them is connected with the endeavors of other planeswalkers. Millions of people play Magic: The Gathering, and while I’m sure that many of them are already skeptical about this project, an equal number would be intrigued by and appreciative of a bold choice for a female protagonist, something that fantasy epics certainly struggle with. Just the very possibility is something that I’m excited about. 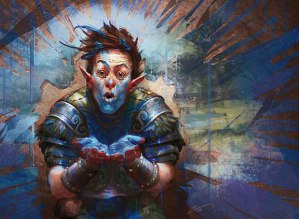 Also, leaving the story aside for a moment, consider the incredible art that has graced Magic cards over the past twenty-one years. Talented art direction will certainly be needed to rise to the standard that that has been set by artists like Peter Mohrbacher, Mark Rosewater, and Izzy Medrano, but there’s no way around it. Again, the standard has been set too high, and if the film fails in this regard, it may not matter how compelling the character development is. I’m fairly certain that whatever the content of these movies is, they will look incredible.

The project is still in the announcement stage, so expect to wait a few years before experiencing either a crushing disappointment or a righteous vindication of all that time you may or may not have spent slipping cards into plastic sleeves and explaining that it’s not a children’s card game. Please feel entirely secure in the fact that as new updates come in, I will shout them at you through my computer screen. Of course, it’s entirely possible that the film will never make it to the screen, like so many other projects. I’m keeping my fingers crossed, though!

2 thoughts on “A Little Movie Magic”