Once again, the Mnet charts are dreadfully boring, and as we come ever closer to Valentine’s Day I fear this will continue to be the case. However, as I’m not in the mood for banal love songs nor interested in the surprising comeback song from Rain (seriously, he’s still making music?), I initially thought I would need to dig deep for this post. You can thank Lady Geek Girl herself for preventing that from happening—or you can thank my laziness, anyway.

Two years ago in July the girl group GLAM—shortened from ‘Girls be Ambitious’—released their first single, Party (XXO) to moderate success. Or at least I’m assuming it was moderately successful, because last year they had a comeback single. Even so, outside of Party, I haven’t heard anything from them or anything about the group at all, which is really a shame. It’s true that they’re a talented group of women, but what’s even more important about them is that in an industry inundated with tradition gender roles when pertaining to romance, GLAM took the bold move to make an entirely LGBTQ+ inclusive song.

Are you excited? You should be.

No matter the culture, and no matter how great it may be in and of itself, the LGBTQ+ music scene isn’t usually granted the same limelight as literally any other kind of pop or alternative music, so to see a full-fledged girl group make an upbeat party song with non-heteronormative implications is fantastic. I think I just shed a tear. The video itself shows life, and by extension love, being like a huge party. The colors are bright, and while the CGI is a little hokey, it keeps with the fun theme. Along with this, GLAM further portrays that there’s no one way to be a girl with their costume choices. There are the more feminine members, one that I would consider in-between the two extremes, and the members that are shown in more masculine roles. (A girl coming out with football shoulder pads on? Yes please!)

While all of this is great, the aspect I think I like best about this MV is that there is no goddamned queerbaiting. With a song so open to interpretation about its romance—whether you take it as a more lesbian-oriented song or a ‘whatever you’re into’ song—and a cast of almost entirely women, I was basically expecting a few moments of are they/aren’t they kissing scenes. Yet there’s none of that. There aren’t even any 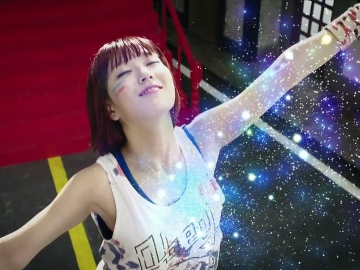 scenes that I’d consider explicitly romantic. Some may consider this a shortcoming—I mean, why not go whole hog?—but I argue that a scene like that wouldn’t fit with the tone of the song. The chest explosions a la Katy Perry’s Firework have a presence that overcomes the seeming need of traditional romance imagery and instead reworks it into imagery of self-acceptance and, for a lack of a better way to put it, letting your true colors shine through. That is so, so much more important than reinforcing the cultural pressure to be in a physical relationship.

Are you a boy? Girl? I don’t care – passion is the key, a hot heart is your ID

From there, they go in to the chorus, re-iterating this point:

A Kiss XXO, anyone can be a Romeo

A touch of your lips XXO, if the heart starts to race, you’re Juliet

Honestly, I think these lyrics speak for themselves. Party (XXO) is a song about the joy in finding love and experiencing it, no matter your gender or the gender of the person you’ve fallen for. It’s about trying to liberate those people that feel nervous about their own feelings and, while perhaps not making an anthem per se, it gives those people a happy song that they can listen to. A song to let them know they’re not alone and that their love is just as valid and fun as anyone else’s.

Overall, I give this song a five out of five spaceships. Party (XXO) is a super fun song, super catchy, and has a super good message. I really hope that their career begins to pick up, because the music scene is in dire need of a band like GLAM.