According to the same graph we looked at last time, femslash makes up just about 3.5% of all works on AO3, as opposed to slash’s 42.5%. There are plenty of theories as to why this is, even though we can’t conclusively pick one reason or the other based on the data, if only because none of the surveys outright asked AO3 users “So why don’t you guys write or consume femslash?” (It’d be a good topic for a future survey, if the survey creators are reading this!)

Right now the data only proves that there is very little femslash, nothing more. As for theories about the lack of femslash, though, it’s easy enough to assume it’s just the opposite of why slash rules the internet: there are a lot of male characters to write slash about, but there aren’t a lot of female characters to write femslash about. Perhaps straight girls want to write about two guys because they personally find it erotic, or perhaps female-identifying fans don’t want to write about girls due to internalized misogyny or because reading about men offers more distance from which to experience romance.

All of these are good theories. destinationtoast did a follow-up analysis of the fandoms which have the most femslash, and the top one was women’s soccer RPF, or fiction written about real-life female soccer players. As you might expect, almost all the personages in this fandom are female. Other high-scoring fandoms are Rizzoli & Isles, which stars two female characters, and Orphan Black, which stars (at least) nine female clones. So it seems fairly safe to say that if a canon source had more girls, there would be more femslash in that fandom.

Even when female characters exist in canon materials, though, they’re rarely written in dynamic or compelling roles—in short, if they aren’t leads, then they often exist as an afterthought to the men, not alongside the men. For example, the BBC’s Sherlock has female characters, but the main characters are two guys, Sherlock and John, and as a result, most of the fic in Sherlock fandom is about Sherlock and John. Characters like Molly Hooper and Mrs. Hudson are framed by their relationships to the men, and thus may not hold as much potential for fanficcers as do the main characters. As AO3 Census creator centrumlumina says, often the most popular ships are born out of a canon rivalry, a best friendship, a profound bond—and most of the the time, these are relationships that men get to have.

I think the most compelling theory I’ve seen floating around is the one that says that fanfic authors, especially the 80% of them which are female-identifying, are societally conditioned to regard female sexuality or female pleasure as unimportant or undeserving of attention. Think about some of the non-canonically supported ships that you know. Mycroft and Lestrade have been in one scene together in all nine episodes of Sherlock, but Mystrade is a huge ship. In Teen Wolf, Stiles and Derek are constantly shipped together, despite sharing very few canon scenes. Meanwhile, Allison and Lydia, who are getting a lot of screentime together this season, have barely five hundred fics on AO3. (Sterek has about twenty thousand.) I don’t mean to disparage one ship or the other—what I’m curious about is why fandom seems to have latched onto the male ship over the female one. 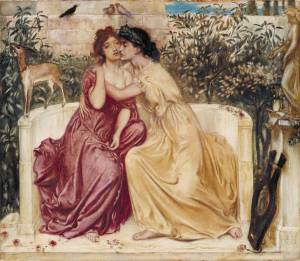 The poets Sappho and Erinna.

This disinterest in female sexuality can be seen even in everyday examples from our culture: female rape scenes in movies are okay, but female pleasure is not allowed; girls are taught that their first time having sex should hurt, because the person who gets pleasure out of sex is the man; there’s even been controversy over lesbian erotica being “too racy” to sell well, although gay erotica seems to do just fine. This focus on male pleasure over female pleasure can even be found throughout history: early translators of the poet Sappho, a woman who loved both sexes, deliberately changed the pronouns in the poems so that Sappho was waxing poetic about a man, not a woman. Culturally, the male gaze rules supreme—if a lesbian scene isn’t written by and performed for a male consumer, it most likely would not exist.

And yet fanfiction is an inherently transformative work which, by its very nature, strives to address or change some flaw that exists in canon, even if that flaw is “why isn’t there more of this thing?!” Fanfiction has addressed the lack of gay men by making straight characters gay; it’s addressed countless cultural misappropriations with wildly varying AUs; it’s addressed canon plot holes and timeline issues with fix-it fics and crossovers. Fanfic is the show your show could be like, if only you dared to dream.

But for all its transformative nature, fanfiction and fandom still suffer from a real dearth of femslash. Beyond the simple fact that very few girls exist in canon materials, the societal emphasis on the male gaze seems to have affected fanficcers’ creativity to such an extent that even in our own fantasies, we cannot give women a fair shake. Just as the answer to “Why is there so much slash?” cannot be boiled down to “Well, straight girls are horny”, the answer to “Why isn’t there any femslash?” cannot be boiled down to “Well, straight girls don’t care.” The bias against female characters and female pleasure is an ingrained, institutionalized problem which won’t go away on its own.