Some of the saddest comics-related news I heard at the end of last year was that Marvel’s most recent Young Avengers run was going to be coming to an end with issue #15. Well, I finally got my hands on the final issue of the run, and, while the story definitely got a satisfying conclusion, it’s still sad to see it go.

I can’t speak to how different Kieron Gillen and Jamie McKelvie’s take on the Young Avengers was from the original Young Avengers series by Allan Heinberg and Jim Cheung, as I haven’t read the original. What I did know about this series when it came out was that 1) it was set a few years after the original series, and 2) it was going to be a very diverse group of young adult-age superheroes doing awesome superhero things, and that was really all the hook I needed.

The series’s main plot deals with the team’s battle with Mother, an interdimensional parasite summoned by accident when teenage magic-user Billy tries to bring his boyfriend Teddy’s mom back from the dead. The creature warps the minds of the adults in-universe so that the teens have to fend for themselves against it. One interdimensional tour, some sinister parental figures and evil exes, and several existential crises later, they emerge victorious, and party out their remaining drama in a two-issue dance-club-set epilogue. 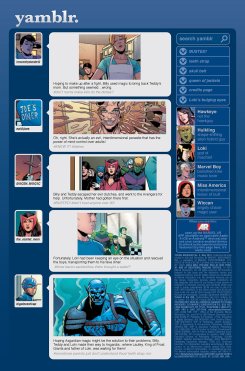 This was definitely a comic aimed at the Tumblr set of comics readers—the recaps at the beginning of each issue were even formatted to look like a Tumblr dash—featuring a widely diverse cast, a zillion pop culture references, a superbly sex-positive message, and a tongue-in-cheek tone that could admittedly be hit or miss for some readers. As you might guess, I was a big fan of the series, and so I loved watching Loki make Game of Thrones references and Instagramming pics from their magical mystery tour.

You probably hear this from me a lot, but goddamn do I love me some varied representation, and this series definitely delivers. Kate “Hawkeye” Bishop is the only even arguably straight person on the team, which features Jewish Billy Kaplan and his boyfriend, Skrull shapeshifter Teddy Altman, gay Latina asskicker and interdimensional traveler Miss America Chavez, black bisexual former X-Man Prodigy, Loki (recently confirmed by Marvel to be both bisexual and bigender), and 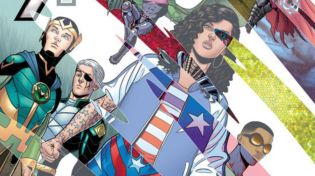 Kree warrior and pop music afficionado Noh-Varr (aka Marvel Boy), who admits that he has done some… experimenting in his time. It’s always refreshing and fun to read well-written stories about characters who aren’t all straight cis white dudes.

Of course, it’s not just a soapbox for representation—although I always appreciate stories with a diverse cast, I have trouble enjoying them if the message overpowers the story. Each of the characters are interesting and unique, and their relationships are what drive the story’s plot. For example, one overarching conflict for Teddy is the aforementioned existential crisis: he leaves the team at one point because he fears that he’s not real, and that he’s just Billy’s creation.

It’s unnerving having an omnipotent demigod for a boyfriend, after all. Kate and Noh-Varr have an ongoing fling/relationship thing that ebbs and wanes throughout the series, and everyone has a contentious relationship with Loki, whose intentions and motivations are never quite clear.

If you have any love for sass, interesting new twists on teen drama, or lovingly drawn images of Marvel Boy’s posterior, I definitely recommend you pick up the paperback collections of Young Avengers.